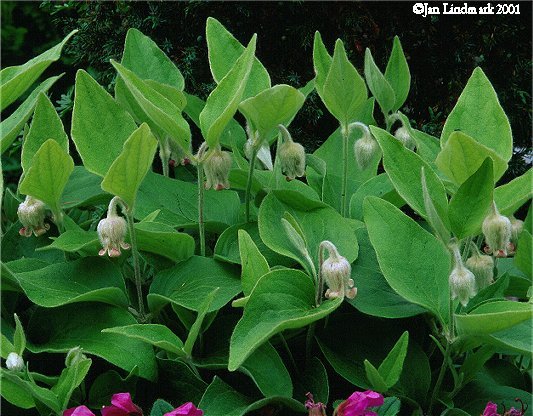 Clematis of the Month for June 2001

Late this month the I.Cl.S. will convene for the first time in the United States, holding its Annual meeting in Portland, Oregon with the Pacific Northwest Clematis Society as host. In token of that event, our clematis for this month is a native of the U.S., C. coactilis. But as befits an international focus, we are happy we can draw on the highly regarded work of our Swedish member Jan Lindmark for the illustrations. The planting shown above is also his, in a small rockery in his garden. It features our clematis in the middle, backed up by a juniper ('Norwegen'), and with the dwarf Rhododendron Camtschaticum just peeping up in front.

If clematis were given to reflection, the one pictured above would surely be astonished at its good fortune, to be living at ease in a comfortable garden. Its native habitat, and that of its closest relatives like C. albicoma and C. viticaulis, is much more severe—a distinctive kind of terrain found mainly in the lower verges of the Appalachian mountain range, especially in western Virginia, and known to science and local tradition as the "shale barrens." These are hillsides so steep and rocky and sunswept that almost the only trees that can live on them are scrubby oaks and pines, and though there is plenty of rainfall, most of it runs off, leaving very little to soak through a surface that is mostly flakes of shale and in some places dolomite. The small plants that scratch out a living there have to be tough, and perhaps the main question for gardeners who are won by the distinctiveness of a species like C. coactilis, is how it will react to a softer lifestyle. Will it be killed by kindness, or possibly develop a brutish disposition and start elbowing everything else out of its way? 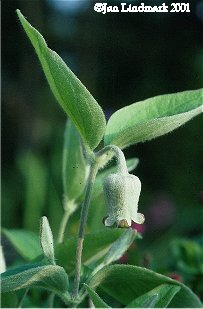 With this one they need not worry. Though it is still rare in cultivation (as it is, increasingly, in nature), and there is no great fund of reports from gardeners, from what we do know, it seems both adaptable and well-mannered, and no one who has seen it well displayed could dispute its come-hither quality in a garden. The plant is herbaceous, and hence disappears in wintertime, but begins fairly early in the Spring to put up new shoots, with the bases of the pale-green leaves almost clasping the stems, and by early summer the first set of bells should appear. The prime attraction, as shown in the second photograph to the right, is that the entire plant is covered with down—especially the flowers, which completely hide a dull light-purple skin beneath that coat of white fur. Like the other U.S. "Leather Flowers" it has thick-textured sepals (usually four) that hardly ever open wide but have a characteristic recurve at the tips, giving the bell a graceful scallop. The stems are rigid enough to hold themselves upright through the first bloom, and perhaps the second, which should occur by midsummer, but if they continue to grow toward a third bloom, they start to weaken and sprawl, and a gardener will have to decide whether to let them do that, or put in a few stakes to support them. Apart from that, all the plant needs is a reasonable amount of sun and fast drainage.

It is unlikely to get above 24" (60 cm.) tall, but tends to broaden somewhat at the base year by year. So at intervals it can be divided during off-season, either to keep it in a desired compass or to get another plant or two.

The branch of the genus to which this plant belongs is known to botanists as "Viorna." It includes such familiar species as C. texensis, C. crispa, and C. viorna itself, along with some twenty others, most of them native to the United States. Gardeners who find their way to the lowlier (non-climbing) members of the section may feel the family relations are a bit unclear, though of course it is easy to see the kinship in the flowers. It seems as if the erect species ought somehow to belong to a different branch of the tribe. And in a sense most of them do. In a lovely clarification of the matter, both Magnus Johnson and Christopher Grey-Wilson have recently endorsed the earlier finding of R.O. Erickson that the majority of these erect species should be classified as integrifolias. It makes perfect sense, despite the irony that the longtime owner of the franchise, C. integrifolia proper, is not native to North America. Gardeners who know C. integrifolia as a hardy, long-blooming, and virtually trouble-free plant in all sorts of environments may find that the connection gives them a reassuring place to start with C. coactilis and others of the low-growing Leather Flowers.