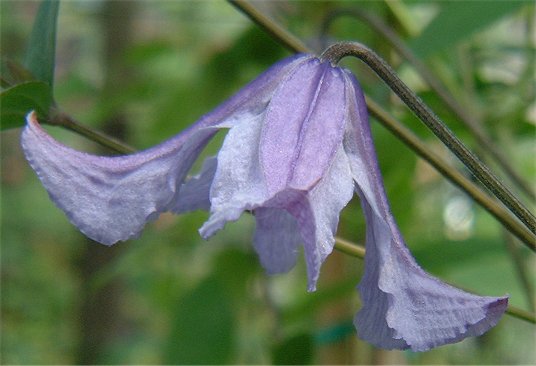 Clematis of the Month for August 2001

Though Clematis integrifolia may not be on anyone's list of the most spectacular clematis, it would certainly have to rank high on the list of the most important, both now and in the past. In addition to being long-established as gardenworthy in its own right, it has been one of the fundamental resources of clematis hybridizing, from the very first recorded instance (back in 1835, with C. hendersonii) to potent recent introductions such as C. 'Alionushka' and C. 'Roguchi.' Our featured 'Blue Boy' is one of its progeny, recent in the sense that it is only now becoming available everywhere, though in fact it was bred as long ago as 1947.

The breeder was Canada's remarkable Frank L.Skinner, whose long career as farmer and hybrizer was devoted to introducing valuable plants from Europe and Asia and working toward adaptations of them hardy enough to stand up to the unforgiving winters of the northern prairies. Along with an impressive roll-call of fruit trees and ornamental plants, he produced several valuable clematis, including the macropetalas 'White Swan' and 'Rosy O'Grady' (his spelling), 'Prairie-Traveler's Joy,' and this 'Blue Boy,' all notable for their cold-tolerance.

'Blue Boy' was a select seedling from the same cross (loosely speaking) that had produced C. hendersonii and also C. eriostemon—namely, C. integrifolia × C. viticella. Compared with those earlier cousins, it is somewhat taller and more expansive, and the flowers slightly larger, with a lighter colouration, mid-blue to gray-blue depending on variables in their short-term climate.

Skinner himself described the plant as reaching to about four feet (1.25m), and at that height it is virtually self-supporting. But in climates warmer than his at Dropmore, it can easily grow twice that tall. Since it does not cling, it needs tying or threading into a host by the time it is about six feet (2m) tall, but it is sturdy, and with only minimal support it takes on a strikingly independent look, especially in blooming season, when the blossoms jut out on their individual wiry stems at a considerable angle from their base, and seem to hang free in the air.

The pattern of bloom in 'Blue Boy' is not unique, being shared with variations by hybrids of similar lineage, but the wiry stems give it more evident symmetry than most. The initial midsummer blossoms are those at the very top of the stalks—first the center blossom, then a pair just below, far apart because they are on opposite sides of the stem. Underneath this topmost node is another that may come into bloom at the same time or wait until later. And the same pattern of paired blossoms may extend to the next node below, though seldom any farther down. Each stalk viewed separately looks like a fan, with the sets of matching flowers on long individual stems. In a mature plant there are so many of these blooming at once that the elegance of the arrangement goes unnoticed. (How unfortunate, that we have to settle for a few hundred gracefully flaring, long-lasting bells.)

When the main bloom is finished, perhaps in late summer, gardeners with a long growing season can bring on a second flush by cutting back to about midway, past the nodes that have played themselves out. The late blossoms will usually be fewer and smaller than the 2.5" (6cm) of the early crop. When they too are gone, the last step belongs to the winter weather, which will prune the plant back to earth.

'Blue Boy' makes a handsome foil for C. × durandii, another integrifolia hybrid (see our CL of the Month for June 2000), and is easy to tie (each year) into a sufficiently big climbing rose. But indeed it has scores of eligible hosts.

Note: Australian viewers will have discerned that this is hardly a report on C. 'Blue Boy' as they grow it. Their 'Blue Boy' is what most of us call C. 'Elsa Spaeth.'