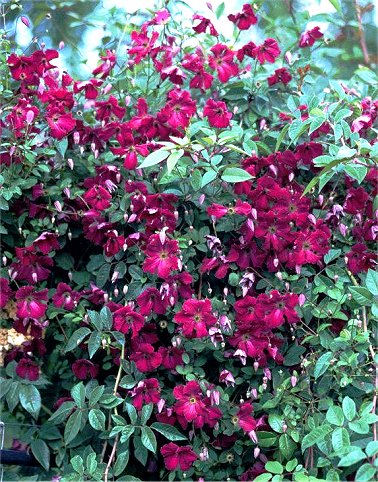 Clematis of the Month for September 2001

It has taken an unofficial campaign by growers and experienced gardeners, but in recent years the small-flowered clematis known as "viticellas" have noticeably come up in the world. Though a dozen or more of them have long histories of availability in garden centers, especially in England, and they have always had the approval of experts, they share a marketing handicap with other "new-wood" clematis, namely, that they are not ready to show off their flowers when the gardening urge strikes most people in the Spring and sends them foraging in the garden centres for plants. As a result casual gardeners might go on for years without suspecting what they are missing. Nowadays, helped on by a flood of illustrations in books and magazines and on the Internet, and by good new cultivars nearly every year, the viticellas are in steadily increasing demand, for their strong constitution, rapid growth, freedom from "trouble"—Dr. John Howells even called his 1998 book on them Trouble Free Clematis—and of course their eye-filling bloom. 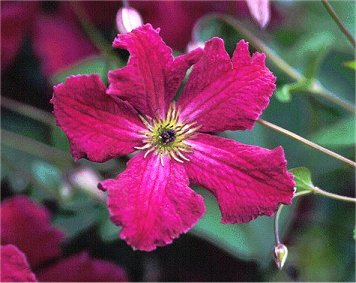 C. 'Kermesina' is one of the old-timers, a textbook case of the small-flowered viticella. It is a vigorous climber to 10' or 12' or even 15' (between 3m and 4.5m) depending on its situation, and blooms in midsummer on (mostly) its upper half. The flower measures about 2.5" (6cm), opens almost flat, though with the tips occasionally tucked under by a curl at the margins, and is of a rich red colour, often (loosely) described as wine-red. The distinctive mark of the flower is a small white throat, setting off anthers that are a dark purple-brown, almost black, and greenish filaments. The blossoms come singly on stems long enough to permit them to nod slightly and sway in a breeze, though not with quite the lilt on the bough that is the special charm of its parent C. viticella. When the 'Kermesina' flowers first start to expand—and this is true of several of the popular viticella cultivars—they often suggest the tentlike half-open bells of the species, but one of the attractions that has made the fortune of these offspring is that nearly all of them go on to open further, presenting more of their interior colour and hence making more of a show. 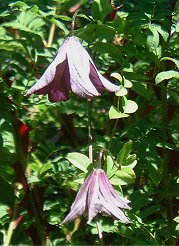 It was probably this trait that kept clematis breeders interested in working with C. viticella in times when commercial advancement depended almost wholly on their advances with large-flowered hybrids. C. viticella is so variable from seed that one or two sowings might easily produce a start toward some interesting new variation. Better still, the species was amenable to crossing with several others, making the possibilities that much more enticing. Victor Lemoine, the French nurseryman so famous for pioneering work with lilacs and fuchsias, was well into the sorting and selecting of viticellas in 1883 when he introduced 'Kermesina,' and for good measure, a closely related but very different member of the clan, 'Venosa Violacea.' (We have featured two others of these long-established viticellas in previous instalments of Clematis of the Month, 'Etoile Violette' and 'Minuet,' and also a more recent hybrid, 'Betty Corning.' They are all quite similar in their basic habit and simple needs, and are amenable to any garden use that permits them to grow tall enough for the wood to ripen and set buds.)

Now as to the name. If we look up the word Kermes we are likely to find ourselves travelling through more curious lore than we were expecting. Kermes is a translation of the Arabic name for a certain scale insect (Kermes illicus), notable because in medieval times the dried and ground-up bodies of the females were the only source of an incalculably precious dye. And what colour was this dye? Why, a rich, deep red, perhaps with a touch of purple. Kermes. Carmine. Crimson. Chamoisi—all these originate from the same word. Just how much of a linguist Lemoine was we do not know, and he presumably did not intend to have potential buyers of his plant thinking of insects. But he evidently took Kermes to be the right pointer to his new bright red (not quite the colour of blood, but close), and chose to give it not a French but a more classical termination.

Note: for years there has been a confusion in the trade between C. 'Kermesina' and viticella 'Rubra' (or viticella rubra, as it used to be written), with some experts saying they are the same and others saying one is authentic and the other not, or one is bygone and the other still with us. The question is complicated, as often in these matters, because the argument is about both the names and the plants. There will probably be an instant outcry from somewhere about the following observation, but it appears from scattered inspection over a long period of time that what is offered under either name in country after country usually has the white-throated blossom, a mark not traditionally associated with 'Rubra.' If that difference were more widely accepted, there might soon be fewer 'Rubra' labels in our garden shops, and more 'Kermesinas.'