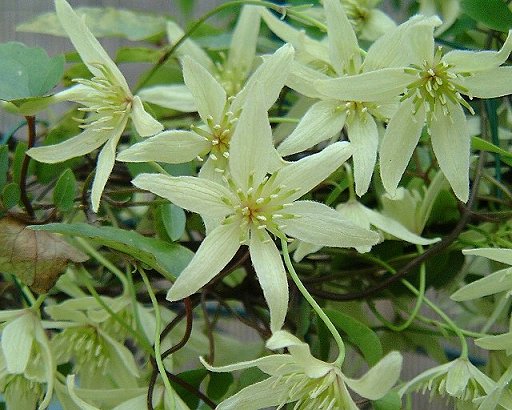 Clematis of the Month for October 2001

For many years the native clematis of New Zealand have interested botanists and hobbyists around the world, but even today with the clematis trade broader and more vigorous than ever before, most of these species are easier to find in books than in nurseries or gardens. A few years back the hybrid 'Joe' found its way around the world, [see the CL of the Month for March 1997] and Clematis marmoraria has recently had a success so brilliant among alpine gardeners that reportedly few plants of it are found now in the wild. And there are other evidences that the New Zealand heritage is gradually becoming more accessible elsewhere. [See, for example, the CL of the Month for May 2000.] But for the most part, this fascinating group of plants—so distinct that it has now been ranked by Magnus Johnson as a separate section of the genus—is far from the kind of availability it deserves.

C. forsteri is a case in point. It is an evergreen climber endemic to New Zealand, widely studied and discussed, and represented in various botanic collections, but relatively rare in home gardens. Its Achilles heel, if it has one, is shared in varying degrees by the other New Zealand species, and undoubtedly it has kept many gardeners from seeking it out: it has a limited tolerance for cold. It is, alas, "tender." Northern-hemisphere gardeners who grow it well either treat it as a conservatory plant or give it a good, deep container that can be left outside most of the year but trundled out of the weather at the first threat of frost. Under those conditions the plant may not bloom with its full natural abundance nor reach the height sometimes seen in the wild, where it can grow to as much as 10'-12' (3-3.5m), but even so, in both foliage and flowers it still is a cherishable ornamental plant. The ternate leaves, with their ovate to almost triangular leaflets, are of a medium green, fairly tough-textured and usually shiny.The flower-stems are lighter green, smooth and wiry-looking, and supple enough so that when the small clusters of nodding or fully open flowers appear in the Spring they can seem to be taking off in all directions. (In New Zealand this phenomenon is expected in October and November; in the northern hemisphere we look for it at about the same season as the Atragenes or perhaps the montanas.)

C. forsteri is dioecious, but there seem to be only slight differences in size or showiness between the male and female flowers. Searchers in the nursery lists may notice another kind of difference, in descriptions of the main colour of the blossoms. The sepals are variously said to be greenish cream or greenish white or pale yellow, and they may indeed be of those different shades. Most of the plants offered outside New Zealand have had to be grown originally from seed, and the seed could have come from different localities. Given that C. forsteri is a variable species even on its home ground, it is to be expected that different clones of it will show up as it is propagated elsewhere. So there is no one "authentic" colour, though in fact the range of differences is relatively small. A pale creamy yellow touched with green might do as a first approximation. What is uniform, and one of the attractions of the blossom when viewed close up, is the broad-spreading eye, with its spiky anthers of strong yellow. Add the attraction of a come-hither fragrance and it is no wonder that the plant has admirers.

The flowers come on last year's wood, and the plant will need no pruning except to shape it up if it is growing raggedly, or trim it to fit an intended space. It never hurts, however, to cut a stem or two far back if the base is starting to look bare; the recommended time for such beneficial surgery, as with other Group A and B clematis, is right after the Spring bloom is past. It is important with this species not to over-water.It does not like a drought, but also it does not require the steadily moist environment we like to provide for most of our clematis, and will be the better for short intervals of dryness.

C. forsteri has had more than its share of orthographic troubles in books and nursery catalogues. It is incessantly listed as C.fosteri, and occasionally as 'C. forsterii,' and even as C. forrestii, which is quite another kettle of clematis. It does not help that there is also a considerable set of not quite discarded synonyms. One note will not stem the tide, but the truth of the matter is that the name commemorates the botanist J.R.Forster, about the spelling of whose name there has never been any disagreement.

Postscript:- A belated cross-check with the invaluable "Clematis on the Web" at http://www.clematis.hull.ac.uk/ reveals a specimen in which the anthers are unmistakably green, not yellow. So much for tidy generalizations about clematis.