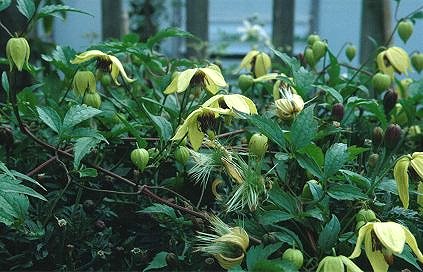 Clematis of the Month for November 2001

For those of us who do not have a resident C. cirrhosa or another of the few winter-blooming clematis, the blooming season may be nearly over by November. If the cold has not already closed in, there may be some last stragglers among the large-flowered hybrids, possibly a defiant flush from some maverick like C. florida 'Plena' that should have finished weeks ago, and sprays of small blossoms from the late-maturing species and their cultivars. C. serratifolia is one that may still have flowers left, but this late in the year it is more likely to be all leaves and puffy seedheads. For some of its partisans this is the phase they like best, for it makes up for a relatively brief bloom-time with a long period of ripening, the foliage going from green to light tan and the seedheads very gradually drying out, but remaining decorative through it all.

This species has never had quite the attention devoted to some of its flashier-coloured relatives such as C. tangutica and various "orientalis" cultivars, but still it has had a career of steady approval almost from the time it was introduced to the West (probably in 1918, though the date is uncertain) by E.H. Wilson. He brought it from Korea, but it is found also in Manchuria and some other regions of East Asia. It is a climber capable of reaching 15' (5m), though not a rampant grower. Many a species of clematis has foliage with toothed leaves and leaflets, but this is the one that has formal ownership of the name—serrati-folia, serrated leaves. Its leaves are pinnate, with five leaflets more often than not, and the margins toothed. In the mass they give an impression of lightness, even delicacy, rather than of bulk. 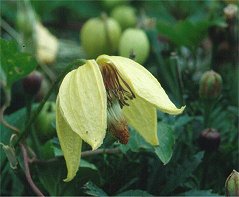 The flowers appear on the new wood, singly or in groups of two or three, mostly at the upper axils. They open in two stages, with their four tough-textured sepals of pale or creamy yellow forming a bell at first and then spreading wide to uncover a robust-looking center of brown to brownish-purple anthers. At full extent the blossoms measure from 1" to 2" across (2.5-5cm). Usually they are fragrant, with a scent most often likened to lemons. Whatever the scent, it is much appreciated by bees and other pollinaters. By the time the flowers are past and the seedheads are taking over, a very high percentage of the seed will be viable. Only gardeners with warm microclimates need think twice about this, but they might do well to remember the caveat that goes with other prodigal seeders like C. vitalba and C. terniflora, and prune off all or most of the seedheads before they begin to fall apart. Otherwise they may find themselves combing their garden (and possibly their neighbors') next Spring, removing little serratifolia volunteers.

Apart from that one localized caution there is no reason to be wary of C. serratifolia. It is easy to grow, utterly simple to prune (Group C or III), and ornamental at every stage. Normally treated as a climber, it is quite happy to scramble instead, and so can even be used as a groundcover if a deciduous one is wanted. Another positive note, for gardeners who find themselves regularly mistreated by rabbits: scattered reports suggest that this is one clematis rabbits do not seem to like.

C. serratifolia has drawn sporadic attention from hybridizers over the years, though until quite recently their creations have not reached an international market. Two that are worth seeking out for their richness of bloom are the Dutch 'Golden Harvest,' conjectured to be a seedling of C. serratifolia × C. tangutica, and one of its offspring, 'Kugotia,' perhaps better known under its trade name, GOLDEN TIARA®.