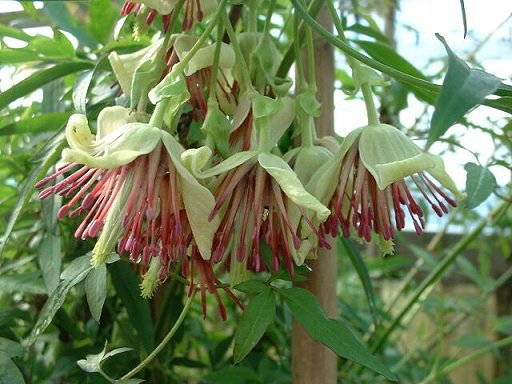 Clematis of the Month for January 2002

[Editors note:- in the original version of this page, I was very pleased to use Mike Brown's picture of C. napaulensis. However within just a few weeks, Judy O'Neill has managed to capture the above shot of Brewster Rogerson's specimen in all it's glory. I thank them both for their pictures.]

With C. cirrhosa and its tribe well along in their winter bloom, it is time to look at one of their near relatives, a clematis that is perhaps more often encountered in books than in gardens. So far C. napaulensis has been seen primarily as a hobbyist's plant, not as a galloping attraction in the marketplace, and though it appears in several current lists (mainly English) exhibited on the Internet, it is still something of a rarity elsewhere. It may even be becoming a rarity in the wild, to judge from Indian plant-census reports that include it as "threatened." But for gardeners who want a winter-blooming clematis unusual in both foliage and flower, and can protect it from temperatures below freezing, it is ripe for a close inspection.

It is often described as "semi-evergreen." The term is something of an anomaly, recalling daylily breeder Darrel Apps' wry comment that being semi-evergreen "is a lot like being semi-pregnant," and unfortunately its meaning shifts as we turn from one plant to another—from lilies, say, to daphnes to pyracanthas. But what it means in this case is that instead of retaining its old leaves until new ones replace them, the plant sheds the old ones at the onset of dormancy and has an interval of bareness until the new foliage appears. This happens to the cirrhosas in cool climates, and can happen with shocking thoroughness to C. napaulensis. A first-time patron of the species may see every leaf on a well-furnished plant wither or fall off within a few days, and conclude morosely that all is lost. Certainly the plant can look dead for a while, and gardeners are well-advised to place it with an eye to that seasonal change. But in fact it is probably just resting, and in the autumn will suddenly begin sprouting the bright-green clusters of new leaves that are its winter clothing. Those clustering leaves are among the plant's best features, breaking from the nodes on short stems that fan them out in different directions, and holding their fresh colour through the holiday season and for weeks beyond until they darken with age. 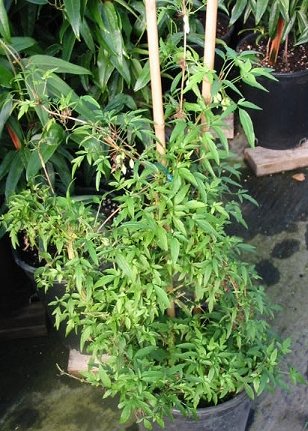 The small, prosperous plant of C. napaulensis shown here (right) is actually seven years old, cut far back last year when it finished blooming, in order to remove an unseemly bare patch and promote new stems near the base. This new growth is quite typical: stems already becoming woody, finely-cut leaves with their narrow terminal leaflets, and at the top a few bracteoles from which the flowerbuds will be detaching themselves before long.

Depending on the site and its weather, bloom may begin in late autumn or early winter.The flowers can come singly or in pairs, but more often they develop in lax clusters of several bells, usually underneath a set of leaves. They do not put themselves forward; sometimes they seem almost to be hiding. But for all that they are among the most distinctive in the genus. Each one is on a stem of its own, with the bract part-way down. The colour of the sepals may vary somewhat from plant to plant and season to season, in a range from greenish white or cream to pale yellow. One or two of the four sepals will usually curve back enough to give a view of the long, protruding anthers, a deep reddish purple against the lighter background.

Though classified as a climber, C. napaulensis is not much given to clinging. Its stems lignify so rapidly that the plant is almost capable of standing free. (Almost, but not quite.) It is good at getting support by leaning gently into other plants, and does them no harm. Gardeners who find it shooting up much beyond 8' (2.5m)—and it can go well over three times that high in the wild—may want to tie an upper stem or two into some kind of support, to keep the topgrowth under some control. The plant does not require pruning to keep it healthy or productive, but if it grows unwanted cross branches or gets too dense, it is easily reduced or shaped up when bloom is past, probably at about the time the montanas are starting into flower. But as we show, while it is reasonably young the plant can also be cut back quite sharply to give it new life near the base.

To render credit where it is due: this Himalayan species was introduced in 1912 by the incredibly industrious plant-hunter George Forrest, from seed he collected in the Yunnan province of China. It was at first named for him, C. forrestii, but later found to be already on record under the name it now bears.