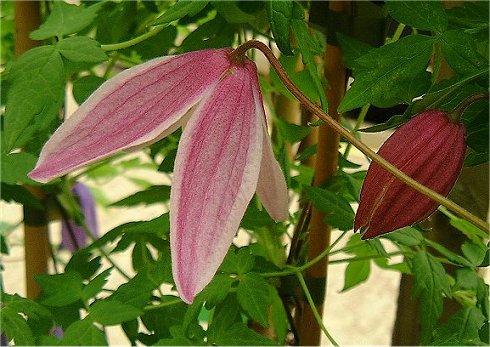 Clematis of the Month for February 2002

Though this clematis was bred by Barry Fretwell in 1985 and doubtless offered at his Peveril Nursery in the intervening years, it was not until the publication of his Clematis in 1989 that it became widely known. It took a few years more for it to become a fixture in the trade, for Mr. Fretwell was understandably not eager to see any of his best hybrids pass indiscriminately into the hands of other growers, and he did what he could to keep the propagation of his cultivars like 'Jacqueline du Pré' under control. But some of his creations were simply too good, and for years eager growers played a sneaky, half-amused game of showing up at his nursery in disguise, as it were, or by proxy, and bearing off a plant of an admired but scarce Fretwell hybrid to propagate at leisure. 'Jacqueline du Pré' owes its currency to that disgraceful (if time-honoured) behaviour. 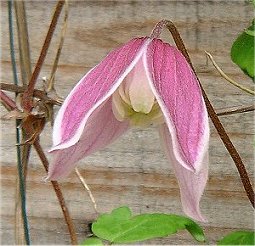 We do not know its exact parentage, but in introducing it Mr. Fretwell called it C. alpina 'Jacqueline du Pré,' and its foliage and flower bear that out. The inflorescence is typical of alpinas in that it is a nodding bell composed of four tepals, with an interior ring of staminodes that almost envelops the stamens at the center. Typical also is the longish stem ending in a shepherd's crook. But this flower is distinctive in several ways. Its tepals are longer than most others in the clan by about half an inch (1.3c.), and have a conspicuous white or "silvery" edging that gives them a sharp outline, accentuating the points. The principal colour varies as always with growing conditions, but may fairly be described as a warm pink or rosy mauve threaded with slightly darker veins. The interior also is pink, though a paler shade, and the staminodes are often touched with pink as well. This fine harmony of colours might be lost on us if the flowers were given to weeping (as some very good alpinas are). Instead they are so free on their stems that they can turn outward and even upward here and there, and open nearly flat as they mature. So in full bloom in the Spring, 'Jacqueline du Pré' can be one of the most eye-filling of all the Atragenes.

True to its lineage, the plant is a climber and scrambler, capable of about 10' (3m.) though if it has lateral support it will more likely put that growth into spreading out. Since it flowers on last year's wood it requires trimming only to remove dead stems or alter its shape or its bulk, and the best time is just after bloom has gone by in the Spring. It is unsuited to climates too warm to permit it a season of dormancy, but, being from the section of the genus that includes some of hardiest of all clematis, is quite adaptable everywhere else.

The plant was named, of course, for the internationally famous 'cellist, who died at the age of forty-two a scant two years before the Fretwell book appeared. She had an especially treasured place among English musicians, and is still a presence by virtue of her recordings and a lingering interest in the complexities of her life-story. Indeed, she has attained almost the status of a cult-figure, if the "Jacqueline du Pré Homage Page" at http://www.jose-sanchez-penzo.net/jdupre.htmll may be taken to witness. It must please those who are devoted to her memory that the clematis named in her honour is so evidently one of the best of its kind.