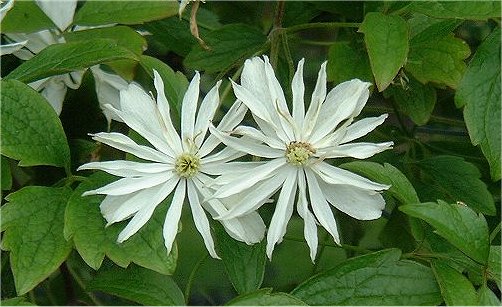 Clematis of the Month for March 2002

When lovers of clematis speak of "doubles," they usually have in mind the breed of late-Spring hybrids that construct their flowers with more than a single round of sepals—sometimes row on row of them, making for large, showy, and often complex blossoms. (Think of the buxom, deep-piled C. 'Vyvyan Pennell,' or the more svelte but still intricate 'Royalty.') And they probably know from experience that perfectly normal single-bloomers may come up unexpectedly with a sprinkle of "semidouble" flowers—that is, flowers bearing one or more extra sepals but not a full extra ring of them. Breeders and hobbyists keep a sharp eye out for chance occurrences of this or indeed any sort, for if it is possible to catch and fix a really interesting one, they may have not only a new clematis for gardeners, but perhaps a new addition to the available gene-pool.

Oldsters among us can remember a time when the notion of double or semidouble simply did not extend to the montanas. Montanas were tall-growing vines that covered themselves in the Spring with a spectacular wealth of bright, simple, 4-sepalled blossoms, pink or white. But in the last twenty-odd years we have seen the introduction of at least six named semidoubles, two of them soundly launched into the trade and the others likely to follow. Of these, the first- introduced was apparently C. 'Marjorie,' from the Fisk Nursery in 1980. At about that time, our plant, the one that became C. 'Pleniflora,' was spotted in a batch of seedlings in Basle, Switzerland and reserved for propagation. The finder was Hans Horn-Gfeller, to whom we will return in a moment. Except for its lacy-looking semidouble blossoms C. 'Pleniflora' is typical of its species—a deciduous climber, many-stemmed and capable of reaching 25' (8m) or more, with the easily-recognizable trifoliate leaves. Reports suggest that 'Pleniflora' is slightly less cold-hardy than some. It takes its time developing to flowering stage, so that it chimes in with the later wave of montanas such as 'Marjorie' and C. var. wilsonii, well into the blooming season of the first large-flowering hybrids. It has little or no scent. What it has in abundance is that crop of surprisingly different white flowers, which display themselves well by facing upward rather than merely outward, and hence repay a planting closer to the viewer than we might ordinarily seek out for montanas. 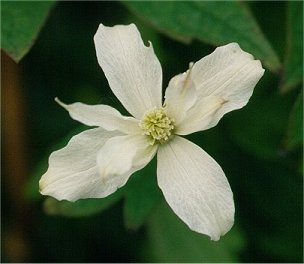 It has another virtue that is unusual for the breed. It can bring on a second flush of bloom, ordinarily sparser and less many-sepalled than the first crop, but of course welcome because it extends the season. Even so, the time for most corrective grooming, if any is needed, would be at the end of the Spring bloom.

As we said, it was Hans Horn-Gfeller who "found" this clematis. One of the early stalwarts of the International Clematis Society, this gentleman is a retired banker now living in Merlingen who has devoted many years to clematis as gardener and plant-hunter. According to a longtime friend, Magnus Johnson, who received the plant from Horn-Gfeller and worked up a supply of it, it was from a batch of Himalayan seed. But if any other mutation appeared in the batch, word of it has not travelled.

For collectors zeroing in on semidouble montanas: the one in widest distribution at present is 'Marjorie,' followed by its offspring, the Dennys' 'Broughton Star' (featured in an earlier Clematis of the Month). Still to reach a general clientele are C. 'Margaret Jones,' Alister Keay's dwarf form 'Jenny Keay,' and a brilliant newcomer from Pennell's called 'Jacqui.'

And lastly for the nominalists among us: unexceptionable as it appears, the name by which this cultivar is most often listed in the trade, C. montana 'Pleniflora,' is improper. Since its exact parentage is not recorded, the plant falls under the rule in the International Code of Nomenclature that its designation should not include a species name, but must consist simply of its cultivar name, as at the top of the screen. But that is not all. This cultivar name is in Latin, which is a no-no for cultivars, Latin being reserved by the Code for species. So, as our Registrar Victoria Matthews attests, 'Pleniflora' is going to need a new name. Quite a number of clematis are in that situation, as the forthcoming Clematis Register and Checklist will make shockingly clear to us all. One hopes that Mr. Horn-Gfeller will step up and rename this one himself.