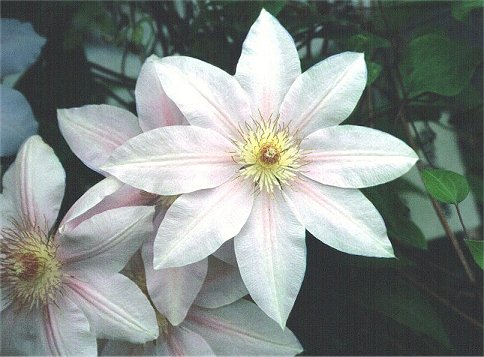 Clematis of the Month for May 2002

For clematis buffs with a craving for history, varieties as old as C. 'Fairy Queen' have an attraction that goes beyond their individual merits. Such cultivars are living elders of a race that came into being nearly fourteen decades ago, with the breeding of the first large-flowered hybrids. Fortunately the cloning of ornamental plants has never seemed to be fraught with ethical or other dangers of the kind that have become familiar in the news, and as a consequence we have some of the aborigines of this artificial race still with us, from C. 'Jackmanii' on, for scientists to study, breeders to return to if they wish, and gardeners to enjoy. 'Fairy Queen' was not among the very first of these; it came along in 1875, in the second wave, when the clematis vogue had set in and hybridisers were working as fast as they could to supply something new and brilliant every year. But what this one offered in that busy market was an especially newsworthy trait. The flower was not only attractive—it was huge.

In its early summer bloom, the blossoms of 'Fairy Queen' can at times be as large as ten inches (25cm), though usually they are of more modest size. Recent books and nursery lists give ranges that vary from 6"-8" (15-20cm) to 8"-10" (20-25cm), so it's evident that location and fairly long-term weather conditions can make a difference. What is crucial, though, is that the blossom holds itself well, not drooping under the weight of.the sepals. Ordinarily the first flowers have six to eight of these, with occasionally one or two half-developed ones making for a semidouble appearance. The colour is a pale pink—some call it flesh-pink— with a narrow bar of deeper pink at the midribs. The entire blossom fades rapidly, including the bars, which become simply a faint tracery of pink in a mainly white flower. Our photograph shows a blossom already starting to fade, but perhaps even more appealing by reason of the subtle markings that are left. To keep the colour as long as possible, it's advisable to place the plant out of strong sun.

Like most Group 2 (B) clematis, this one will normally have a repeat bloom on the new wood, with fewer and smaller flowers but the same colouration. In advance of the second bloom the plant can be trimmed as desired. Denizens of a cold climate can treat it alternatively as a Group 3 (C) variety, cutting it low each year and depending on its later crop. Grown either way, it is not given to producing many stems from the base and is therefore seldom bushy, but can grow to 10' (3m) or more. Some experienced gardeners favor giving it a big, open-textured shrub to climb on.

To return for a moment to the historical setting: 'Fairy Queen' was bred at the English nursery of Cripps and Son, which in the first stages of clematis-breeding was nearly as significant as Jackman's. The firm produced an impressive number of hybrids that are still fixtures in the trade— C. 'Gipsy Queen,' for example, and 'Guiding Star,' 'Lord Nevill,' 'Lady Caroline Nevill,' 'Star of India,' and, not least, C.. 'Victoria.' Unfortunately we may never see their 'Enchantress' or 'Beauty of the Bower,' or 'Forget-me-not,' all presumably bygone, but it is clear they had a way with names. They knew exactly what 'Fairy Queen' would—or should—convey to their English clientele. One can hardly imagine their reaction if they could see it jauntily offered today (on one Internet nursery site) as "a must for the gay guys, quite nice." For them it was a direct allusion to Edmund Spenser's Faerie Queen, the great Renaissance poem full of chivalry and magic, which invoked and celebrated not fairies at the bottom of our gardens, but an icon of national pride, Elizabeth I.