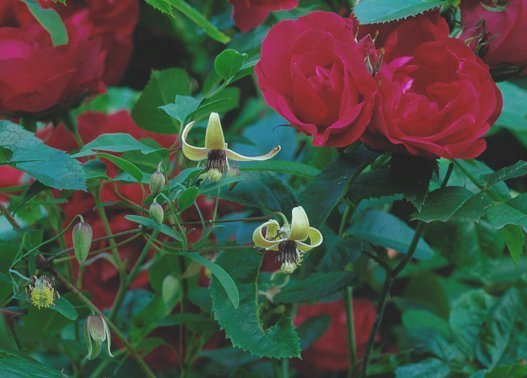 Clematis of the Month for June 2002

With most lovers of clematis it is an article of faith that roses and clematis make good companions—which is to say that roses make interesting hosts for clematis. Advice on that subject is easy to come by, and indeed Dr. John Howells devoted a sizable book to it, called (remarkably enough) The Rose and the Clematis as Good Companions. It's probable that most gardeners planning along those lines would start looking for their clematis among the familiar open-faced hybrids, large or small, because those have traditionally been so much more accessible than the sometimes elusive species seen mostly in books. But who, gazing on the above combination of Rosa 'Flammentanz' and C. intricata 'Harry Smith,' would not want to put some serious effort into having one with a comparably inventive kind of charm? This clematis, though it admittedly may take some searching, is showing up nowadays in a gradually increasing number of lists. But even if it weren't, the idea behind it, the contrast between the sumptuous rose and the perky clematis, lends itself to a hundred variations. 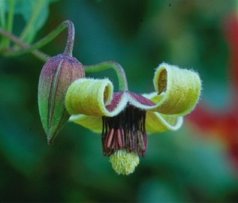 We owe this particular combination, and the photograph, to a longtime friend of the I.Cl.S., Jan Lindmark of Sweden. As he tells us, he acquired the clematis from Magnus Johnson some twenty years ago, under its then current name of C. glauca var. akebioides, and planted it to grow into the rose on a south wall of his house. Each year, he writes, "it begins to flower at the same time as the rose, in the beginning of July, and after three weeks the rose has ceased flowering but the Clematis continues...until the frost stops the party. After the flowering period the Clematis covers the rose with silver-haired seed heads." What more could one ask of a tenant? And though 'Harry Smith' sets itself apart by the rich colouring of its flowers, there are other forms or selections of C. intricata, and close relatives like C. orientalis, that have distinctive merit as ornamentals, either in combination or strictly on their own. 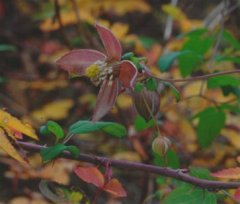 Here, for comparison, is another form of C. intricata, a cultivar propagated by Magnus Johnson under the name C. intricata var. phaeantha 'David Hummel,' and again photographed by Jan Lindmark. It differs from 'Harry Smith' in colouration and perhaps a less wing-tipped stance in the air, but mainly in a later season of bloom, reportedly starting as late as September. Both plants need sun to ripen their new wood and bring them into flower.

The species is native to northern China and southern Mongolia, mainly growing in rocky sites where it may often have to put up with low rations of water and nothing much to climb on. Hence it is one of those clematis (and there are more of them than most general gardening books suggest) that will grow happily in the rich, moist, well-drained soil of a pampered garden, but are quite ready to tackle adversity instead and come up blooming. Though they can and do climb, the stems of C. intricata are given to intertwining, so the plant is equally good at creeping or scrambling over small features of the landscape that happen to lie in its way. (Possibly slow-moving animals as well, because it can be quite vigorous.) Each year the new growth soon produces a wealth of slightly blue-green foliage, most of the leaves divided into five to seven leaflets. Depending on its environment the plant will top out at anywhere from 3' to 10' (1-3m). Its flowers may be borne singly or in sets of two or three, looking at first like small bells that may not want to open fully. There is some variation across the species as to this, but in most specimens the four tepals do gradually stretch out wide. Descriptions of C. intricata sometimes add that the tips flare straight out and do not recurve, but it is clear from the pictures that var. 'Harry Smith' begs to differ—with the result that in this variety the deep-coloured stamens are strikingly visible. (It is actually the connectives, not the anthers, that contribute the dark brown tuft at the center.)

It was Magnus Johnson who gave the name 'Harry Smith' to this variety of C. intricata, once the species had been weaned from its previous names (of which there had been at least six). Harry Smith was a botanist best known for his work on gentians, and a plant-hunter who collected a number of significant plants in China. One of them, collected in 1924, was this clematis. On that trip, according to the story passed on from Magnus, the expedition was waylaid by bandits, who stole everything they thought might be of value, including the field notes on the collections. The seed was of no interest to them, nor apparently the personnel, which is why Harry Smith and the seed made it back to Sweden, and also why C. intricata 'Harry Smith' lacks an accessions number. It does have a nickname. In Jan's garden it is known as "the Robbers' Clematis."

We need to add a word at this point on nomenclature. All students of clematis know that the section of the genus Clematis to which C. intricata belongs, traditionally called Meclatis, has been in a state of confusion for years, with the result that while the learned try to clear out the debris in an extremely complex corpus of botanical evidence, the trade has been distributing plants under many different names, and (often despite earnest effort) getting many of them further confused. For this reason it is difficult for gardeners to know what plant they are really buying when they are offered (say) C. orientalis or C. akebioides, or C. tangutica 'Radar Love,' all three of which have been thoroughly compromised for one reason or another. And those are virtually random examples. A few taxa seem to have fought clear of the prevailing uncertainty, one of them being C. intricata 'Harry Smith.' And yet... and yet... there is a possibility that its name might have to be changed. In the forthcoming Clematis Register and Checklist the name is rejected because according to the data available at the time of publication, a different clematis had been "published" earlier as 'Harry Smith.' This time the question is simply historical. If it's found that the name C. intricata 'Harry Smith' was published with a sufficient description before the current bearer appeared in print, our Clematis of the Month will recover its title. If not, it will need a new cultivar name .

And what can gardeners do in the face of all this complication? If they can be satisfied only with the authentic plant that goes with a certain name, they need expert assistance and should buy only from sources that know where they got the plant, and show that they understand what doubts need to be cleared away. Or obviously buyers can hold off until the plant can be seen in bloom. On the other hand, if they are not gardeners in the tragic mode, in terror of getting the wrong one, they might better plunge in and buy a healthy candidate with the same general growth habit as the one that interests them, even if they are not sure what it is, and see how it turns out. In gardening, taking a chance is seldom fatal, whereas waiting for a total clarification might well be.