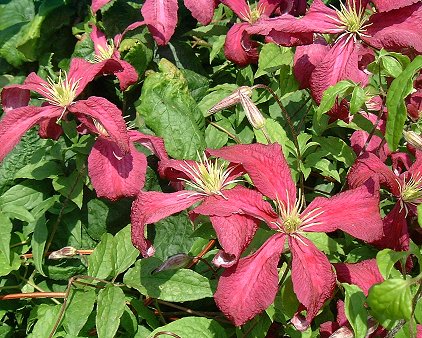 Clematis of the Month for July 2002

At the year-2000 meeting of the I.Cl.S. in Dresden, wandering our host school's grounds to see all the clematis blooming there, a group of nine or ten of us collected around one of the several well-grown viticellas and got into an amiable argument about which one it was. Was it C. 'Minuet', or C. 'Tango'? Those two are very much alike, though distinguishable if examined side by side—an option we did not have. We all knew that given different soil and a different latitude from our own, our ways of telling them apart might not hold good. So we could not be sure, and we left not knowing. (Fortunately no nervous breakdowns are known to have resulted.)

No such question of identity is ever likely to arise with C. 'Madame Julia Correvon.' This is one of the most instantly recognizable of viticella cultivars, first because of the unusually strong, bright red of its flowers, and second because of a quirk in the way the tepals age. They start out, four to six of them, to form a flat, open blossom, but right away some will develop a recurve or a twist, occasionally enough of one to allow a glimpse of the grayish-pink colour of their underside. So the flower might not draw top marks for symmetry, but what the mass of bloom as a whole gains from this little touch of three-dimensionality is a variety of texture that makes it seem very active and full of life. Add to this that the blossoms are often much larger and hence more assertive than in most of the familiar viticellas, up to as much as 5" (13cm) across, that they begin fairly early in the summer and bloom over a very long season, and it is no wonder that this is a steadily popular clematis.

It was not always so. The plant was introduced in 1900 by Francisque Morel, a truly pivotal figure in the history of the viticella cultivars, who derived it from a cross of C. viticella 'Rubra grandiflora' with C. 'Ville de Lyon'—a source, by the way, of C. texensis blood. But it was lost to the trade sometime during the decade of the First World War, and when it reappeared years later it was as C. 'Jules Correvon,' though no one seems ever to have heard of a Jules in the prominent nursery family of Correvon. Apparently it was restored to the English market from a single specimen at Hidcote Manor, and went on from its sinking spell to get its correct name back around 1972 and spread gradually into nearly every corner of the trade.

The great attraction of the viticellas as a group, apart from their well advertised freedom from "troubles," is their adaptability to many different garden uses. 'Madame Julia' shares that advantage. In some references its height may be given as six to eight feet (2m-2.5m), but in favourable growing conditions something more like ten to twelve (3m-3.5m) can be expected, and the base also will usually broaden with time. So it is advisable to allow the plant plenty of room. Container growth is a possibility, and is often recommended, but the container had better not be small. Trellises, fences, pillars, arbors, all are feasible supports, but more and more gardeners seem to enjoy the imaginative challenge of combining plants like this one with hosts or companions in the landscape—small trees, big open shrubs, and perhaps most of all, roses. The only hazard is the one already mentioned, that 'Madame Julia' can in many cases grow big and fairly heavy. If that is its habit in one's own locality, it would of course be prudent to choose a companion plant with a robust framework of its own. The one in our picture need not worry; it is a corkscrew hazel, Corylus var. avellana 'Contorta.'

'Madame Julia' being a Group 3 (C) clematis, the standard procedure is to hard-prune it at some time between the close of bloom in the autumn and the first signs of new growth in the Spring. Most of the time that is the best way to keep it in compass and flowering well. But sometimes there may be a good reason to do otherwise. What if the goal is simply to let the vine grow as much as it can? One attractive planting in Portland has this clematis climbing a house wall side by side with C. 'Marjorie.' 'Madame Julia' being one of the earlier-starting viticellas and 'Marjorie' a relatively late-flowering montana, the two plants have at least some overlapping bloom, unexpected and refreshing. Later, 'Madame Julia' takes over the whole job. Neither plant is ever pruned. The basic rule in the matter is that circumstances alter cases.