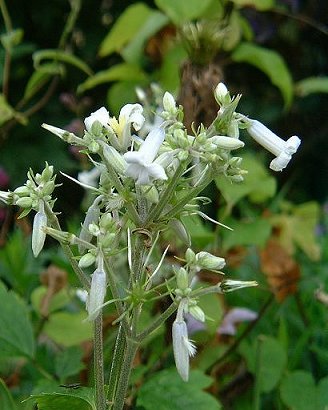 Clematis of the Month for August 2002 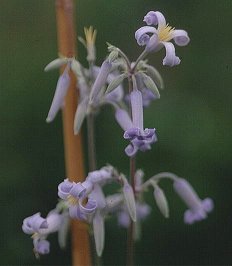 Gardeners who grew up on Christopher Lloyd's Clematis may recall with a chuckle his characterization of Clematis stans as bearing flowers "of a spitefully non-contributory off-white skimmed-milk colouring." It is not known how many sufferers from clematis lust over the years cheerfully decided that this was one plant they need not bother to try, and left it to the hopelessly addicted. But to re-open the question, we offer a no less pungent line from a famous non-contributor to botany, Ira Gershwin: "It ain't necessarily so." Clematis stans is a variable species, and though its flowers differ over a narrow range they are not all alike. In different forms they may vary in shape from slender to chunky, and in colour from white (through skimmed-milk) to a soft lavender-blue. Not to mention that a great part of the attraction of this species lies elsewhere, in its handsome coarse foliage and the intricate branching of its upper reaches.

It is native to Japan, where it is called kusabotan. It is not a vine, but a sub-shrub—the sort of clematis that is usually described as "herbaceous erect," though it can in some situations develop a woody base. Every year it forms a new clump of strong free-standing stems, each bearing three widely-separated toothy-edged leaflets, which have the valuable garden trait of holding their fresh green colour even through the season of bloom. It is a trait they share with the closely-related C. heracleifolia, and the species is still sometimes found in nursery lists as C. heracleifolia var. stans. 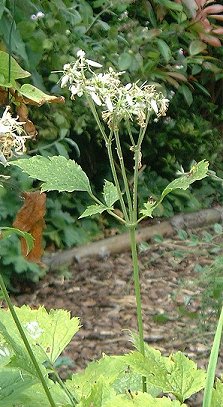 At some signal in midsummer the plant begins to produce additional stalks that will develop many short branches to bear the flowers in whorls, usually at a height of 2.5' to 3.5' (.75-1m) though much taller growth has been reported. The flowers nod on short stems from the topmost level of this stemwork, small hyacinth-like tubes that end in a point when they first emerge from the bud but then open out, recurving at the tip. Here is where the different forms of the species show the most variation. Some may be abundant in bloom, others less so. The thinner-blossomed ones may have a deep scallop but seldom open wide enough to give a clear view of the stamens inside; the fatter ones seem likely to open wider, revealing to the curious that the anthers are creamy to white. There is some variation as to scent. Luckily, most reports credit C. stans with a delicious fragrance, the most usual comparison being with Convallaria, lily-of-the-valley.

It will hardly be of much consequence to gardeners, but taxonomists tell us of another element of variation in this species. Some forms of it are monoecious (having male and female flowers on the same individual), some dioecious (having male and female flowers on separate individuals), and some are capable of operating in both modes at once. What no one has mentioned is where to get any of these.

Though it is ordinarily free-standing, if the plant grows taller than usual it may require some support, either from stakes or from its neighbours if it is placed, as seems natural, amongst border plants. Care could not be simpler. It likes sun and needs its share of water and protection from pests, but makes no special demands. And winter attends to the pruning.

All told, it should be clear that to have the best of everything with C. stans one should first try to see a specimen of an offered form in bloom. But given that this is likely to be difficult for most of us, who may be obliged to start a plant from seed, and hence may need a little encouragement, it is helpful to look through the literature and see how many gardeners speak of it with affection. Or hear three different ladies on three different days reacting to the same spruce young plant with "What dear little flowers!" Or find an experienced judge of clematis calling them "adorable." The species is also beginning to be well-represented with pictures on the Internet. Surely the time has come to raise its grade to "Contributory."