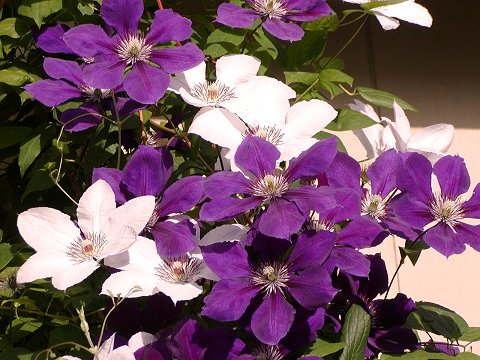 Clematis of the Month for September 2002

To judge from the multitude of 'Gipsy Queens' there are in this world, the name must have a magnetism of its own. A quick search on the Internet provides glimpses of all manner of Gipsy Queens—a choice hyacinth, a pedigreed pony, a prize beagle, a canal boat in Scotland, two (if not more) English pubs, an Armani figurine, an underground musical hit, a chainmail headdress, a mare that travelled across America in the 1920s hitting some part of every state, and—not to string out the list to infinity—an actual person named Cleo. Prominent on the list, and well represented if looked up on its own, is our clematis of the month, which seems to have the distinction of being senior to them all. Introduced in 1877, it has been valued ever since as one of the standard-bearers of the Jackmanii breed. Howsoever much its glamourous name may have helped, it was a happy combination of good looks and dependability that preserved C. 'Gipsy Queen' all this while, and only ten years ago won it an AGM.

Before saying more of it we should acknowledge the obvious fact that our lead photograph presents a double feature. The lovely companion-plant is C. 'Jan Pawel II,' a much more recent hybrid raised by Brother Stefan Franczak of Warsaw. Being a Group 2 cultivar, it has its first bloom on year-old wood, fairly late in the Spring. Though 'Gipsy Queen' can flower early on year-old wood that has been left long, its main bloom is always on the new wood in mid- to late summer. Here, then, we are seeing a type of pairing that can be tricky. Clematis can indeed be planted advantageously side by side, but the standard advice is to choose cultivars that have the same pruning code, or rue the day. Gardeners who have a turn for problem-solving can ignore that advice, and sometimes achieve results like these. The flowers of 'Jan Pawel II,' by the way, are touched with pink at first, and fade to creamy-white. In full sun, as here, the pink is soon gone, but the blossom holds well in that condition.

The flower of 'Gipsy Queen' is not the vast, flat-faced, deeply overlapping commodity that most of the early hybridists were intent on creating, and many of them might have discarded it despite its charm with a regretful word: "gappy." That early standard still persists here and there, but luckily it has faded, and left us with estimable gappy-flowered clematis like 'M. Koster' and 'Colette de Ville' and (a more recent example) the U.S. version of 'Gabrielle.' We owe 'Gipsy Queen' to the good judgment of the Cripps nursery, already mentioned in this series as the originators of C. 'Fairy Queen' and other long-surviving varieties. This one they produced from a cross between C. 'Jackmanii' and C. patens, in which the Jackmanii strain clearly dominated.

The blossom has an interesting early change of colour as it matures. On first opening it can be an intense dark red, but changes rapidly to deep violet, with the red quieting down but often remaining as a suffusion at the midribs. At the center is a small tuft of dark red anthers. But what is most remarkable at first is the velvety texture; it does not stay long, but is irresistible while it lasts, and relatively few of even our finest clematis have it. One suspects it was the alluring soft glow of the young blossom that sent the Crippses searching for a romantic name. The colour of the flower fades over a long period, during which a second flush of bloom is likely to come on. If the plant gives out early, a light pruning may be encouragement enough to bring on another show of smaller flowers before frost.

Speaking more broadly, this is a typical, strong hybrid of the Group 3 persuasion. Since it can reach a height of 8' to 12' (2.5-3.5m) in a season, or even higher if fed with a reckless hand, no one need fear that cutting it virtually to earth in early Spring will cramp its style. It can climb high in a big host plant or on an arbor or fence or trellis. It can make a memorable show all by itself. It is a proven companion for a climbing rose, and there are dozens of suggested candidates, white or pink or apricot, usually light-toned ones to play off against its great depth of colour. Opinions differ as to whether 'Gipsy Queen' can be content for long in a tub, but most advice runs against it. One note pops up again and again in books and conversation. This plant is outstanding in situations where there is room enough to train some of its lengths horizontally. The stems seem to know exactly how to get into position to drape the flowers gracefully. But in fact it is hard to put 'Gipsy Queen' in a situation where it would not drape itself well. And as if it needed any more virtues, it happens to be among the most encouraging of clematis for a beginner to grow.