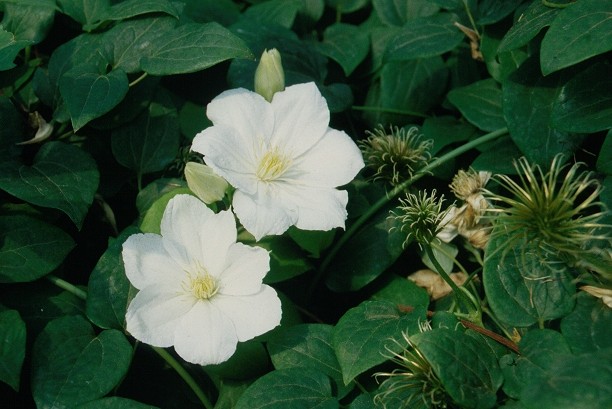 Clematis of the Month for January 2003

Poring over the lists our clematis nurseries are sending out for the new year or posting on the Web, we find the usual abundance of flowers described as "white," some famous and some new or barely known at all, and we may be a little surprised there are so many. Sometimes, of course, there is not much room for description in these lists, and "white" may be shorthand for "predominantly white," but even discounting such items the number of large-flowered whites is impressive. One basic reason for it is that whiteness-of-flower is an ancestral element in the genes of the large-flowered tribe, traceable all the way back to C. patens and C. florida, so that it is unlikely the market will run out of new ones any time soon. But another reason for the breadth of choice is that the "whites" are by no means uniform in character; most of them are individual enough to attract different gardeners for different reasons. Aside from the way that the flowers of some varieties show faint tinges of other colours, or have light or dark eyes at the center, or shapes and textures that set them apart, the plants can vary substantially in their size and girth, and also in their season of bloom. So there is always room in the trade for the venerable ones like 'Henryi' and 'Candida' alongside relative upstarts like 'Tsuzuki' and 'Toki' from Japan and the exquisite 'Roogoja' from Estonia.

Room also for C. 'The Bride.' This capable plant qualifies as both new and old, by virtue of its having been lost (ostensibly) for many years and then unexpectedly recovered and restored to the trade. Stories of such recoveries are always welcome for clematis lovers, who can't help being wistful about oldtimers that got away, even if it happened because a hybridiser chose (as Moore and Jackman would say) to "supersede" one of his plants with what he considered a better one. We think of recoveries such as that of 'Sir Trevor Lawrence,' or C. florida, and keep hoping that someday, somehow it will happen for lost treasures of the breed like C. 'Fortunei.' In the case of 'The Bride,' our debt is to Alister Keay of New Zealand, whose connections with English and Japanese growers over many years have brought us some valuable finds, 'Prince Charles' and 'Allanah' being two of the best. 'The Bride' was not his — it was bred in England (year unknown) by the Jackman firm. But it went missing from English and European lists in the early 1960s, and was thought extinct until Alister brought it from his own stock — and probably in his own luggage — back to England. Now it is available there and in Holland, doubtless elsewhere in Europe, and also in Japan.

The plant is a compact climber, usually between 6' and 8' tall at maturity (2-2.5m), and well suited to a relatively small-scale site or to container growing. The foliage is firm and clean-looking, with heart-shaped leaflets usually in 3s, and of a fairly deep green. The usual procedure with 'The Bride' is to give it any shaping-up it needs when the main flush of bloom has passed in midsummer, after which it will usually mount some bloom on new wood. The flower too is compact, slightly cupped at first and gradually flattening out as it ages. It is about the same size as 'Huldine,' (3"- 4", 7.5 - 10cm) though without the mauve understripe, and more rounded than starlike. Sepals vary from six to eight, usually overlapping but sometimes showing little gaps near the base. The blossom is distinctive enough to win admirers of its own amidst the standard whites. Quietly accented by the soft yellow of the stamens, it has a look of simple and unassuming purity, which no doubt was what the breeders (who lived in an ideal world, as we do) had in mind when they chose to call it 'The Bride.'

If this plant has ever been used in a breeding program, word of it has not come out, although it would seem to be a viable option. Sad to say, though we have a goodly troupe of "The..." clematis, living or bygone — a President, a Queen, a Premier, a First Lady, and a Kelpie, among others — no one has yet presented us with "The Groom."