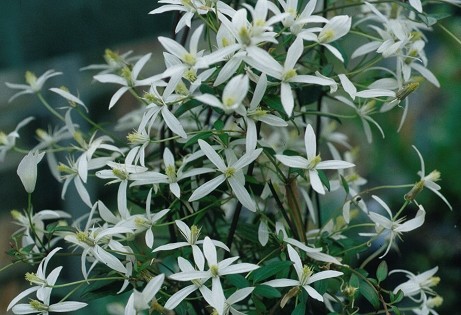 with many thanks for the photos to Mike Brown

Clematis of the Month for February 2003

Clematis aristata, often described as "the wild clematis of Australia," comes down to us with a goodly supply of other names, both common and botanic. Known variously in its native regions as Mountain Clematis, Goat's Beard, Austral Clematis, and Headache Vine, it also carries two ancient names, Old Man's Beard and Traveller's Joy, that ally it with similar wild species on two other continents. (The name "Headache Vine" may rightly belong to a close relative called C. glycinoides, but no one who uses the term is on oath. In any case, the connection with headaches is not that it gives them, but that it takes them away). In addition to these folk names it has an astonishing number of botanic ones coined over the years to discriminate natural varieties. Magnus Johnson records some twenty of these, accepting eight. Christopher Grey-Wilson is satisfied with four, pending further study.

For outlanders the most informative of the names may be the oldest ones—Traveller's Joy, Old Man's Beard—for they point up a perceived connection between C. aristata and three other wild clematis that share the names, the European C. vitalba, and the North American twins C. virginiana and C. ligusticifolia. All four are strong-growing many-stemmed vines that produce small white or creamy flowers on their new wood and follow up with an abundance of fluffy seedheads. Botanically they may be more different than similar: vitalba, for example, doesn't share the others' trait of bearing male and female flowers on separate plants; aristata is the only one of the four that is evergreen on its home ground. In fact botanists assign them to three different sections of the genus, C. aristata being placed in an almost exclusively Australian one called Aspidanthera. The identifying feature of this section is an element of the flower so tiny that gardeners might be excused for not noticing it: an awnlike (bristly) tip on the connective between the two halves of the anthers.

What gardeners are more likely to notice, in situations mild enough to let C. aristata bloom well, is that the plant can be strikingly ornamental. Close up, it has a winsome delicacy in both flower and foliage; at a distance, as it is more likely to be seen in the wild—in gullies or high in the trees along roadways—it takes on a more imposing character, with its drifts of slender star-shaped blossoms, followed by filmy seedheads that may remain on the vine for months.

In its native areas, mostly at the edges of both dry and wet forests along the southeastern coast of Australia and parts of Tasmania, it can grow very large. Reports of its mature size range from 20', the usual estimate, to more than 30' (6-10m). Though this may sound gargantuan, the species is not ordinarily regarded as invasive. In areas where a forest canopy is suddenly broken down by storms or bulldozers, it can indeed put on a rush of growth and become a nuisance, but apparently it is not so hard to bring back under control that highway departments swear at it. In Australia, and increasingly in warm regions elsewhere, it can be found recommended for home gardens, inasmuch as it tends to put on far less height when under cultivation, and does not overpower its neighbors. 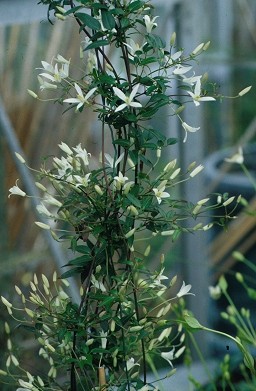 Its foliage consists of simple or trifoliate leaves, usually dark green, fairly thick-textured, and toothed or not depending on the variety. The shape of the leaflets differs from one home-site to another but can be described generally as narrow and sharp-pointed. Sometimes they exhibit a silvery stripe down the center, and the young growth often has a purplish tinge. Stems are dark and sturdy, with the flowers arching out from the upper axils on individual peduncles singly or in bunches of two to six or even seven. The flowerbuds develop into sharp-pointed, upward-facing bells and then open out, displaying (usually) four narrow sepals very widely separated and a prominent spiky—or in the case of females, plumy—center. The impression is of hundreds (thousands?) of little letter X's suspended in space. The plant is arguably the most decorative of the so-called Traveller's Joys. And not least among its virtues, the flowers are fragrant.

It blooms in Springtime, for a month or two between September and November, depending on local climates. For gardeners in the Northern Hemisphere that translates into "March and May," though it would be safe for most of us to expect bloom at about the same time as the majority of the New Zealand species. It would also be safest for those of us in North Temperate or colder climates to raise this relatively warm-blooded species indoors, as a conservatory plant, and to keep it in bounds with a deep pruning when the flowers have gone by.

It is noted by one Australian source that, as with most other clematis, the stems and leaves of C. aristata are slightly poisonous, and have been known to do harm to calves and small goats. If any such happen to be reading this report, they would do well to take that information to heart, and leave the plant alone. Unless, of course, they have a headache.