with many thanks to Jan Lindmark for the photos

Clematis of the Month for March 2003

Viewers familiar with this series of reports will see at once that there is something unusual this month about the caption: it does not feature a single species or hybrid, but something more like a clan. The two clematis shown here, so different in appearance, belong to one and the same line of breeding, and may serve to illustrate in little the enrichment that the work of Magnus Johnson has brought to the once under-appreciated section of the genus known as the Atragenes.

It was not very long ago that the only members of the section most gardeners ever saw or heard of were alpinas and macropetalas, and not very many of those. But over the last dozen years we have begun seeing little by little the results of an expansion into other species and their hybrids—Atragenes such as C. koreana and C. fauriei—with a notably broadened range of ornamental effect. And the point of origin for that expansion, by common consent, was the Johnson nursery in Södertälje.

We have already featured two of his hybrids that are starting to figure in the international trade (C. 'Georg' and C. 'Columella') and another popular one that, though not his, was propagated by him and named for the man who brought it to him (C. 'Jan Lindmark'). Here are two more of his own hybrids with an identical pedigree, the one written at the top of the screen. Both, that is to say, are from a cross between the Japanese C. fauriei and the more widely distributed C. sibirica (often classed as a variation of C. alpina), with the initial generation of offspring (F1) bred again to each other (F2). First, 'Red Beetroot Beauty,' or to use its original name, 'Betina,' and then 'Clochette Pride,' originally 'Campanulina Plena.' (Forgive the awkwardness with the names; we will get to that below.) 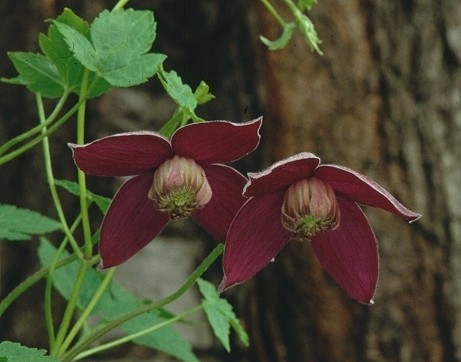 'Red Beetroot Beauty' is in most respects a standard Atragene, in that it is a deciduous climber-rambler, likely to reach 6' to 8' in height (2m-2.5m), and Spring-blooming, with deep purplish-red 4-tepalled bells that are fat and pear-shaped in the bud but soon open wide, showing tufts of staminodes with a reddish stain. (If the hot months are not too severe it will usually have a sprinkling of repeat bloom.) This is one of the most distinctive of all Atragene flowers, not showy, but exceptionally graceful, and more than most it seems to inspire affection. It is now in a good many nursery lists, sometimes as 'Betina' and sometimes (erroneously) as C. barbellata 'Betina.' In a few it has graduated to its new name, 'Red Beetroot Beauty.' 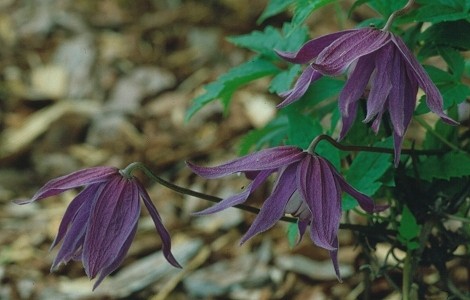 As for 'Clochette Pride,' it is easiest to describe as a purple version of C. macropetala, because despite its different parentage that is exactly what it looks like. It has the same growth habit, the same requirements, and the same double-skirted blossoms, sometimes nearly hiding the ring of staminodes that is usually conspicuous in both its real ancestors. The flower also has one of the marks that C. fauriei transmits to most of its offspring, a narrow gray band running along the margin of each tepal. 'Betina' has it, too.

There have been many hybridisers of clematis over the past century and a half, and surely never more of them at any one time than there are at present. Raising new seedlings has become a hobby within a hobby. And the genetic possibilities are so open-ended that good clematis can sometimes come out of even the most casual experiments. We can smile at the pragmatic sweep of Luther Burbank's approach—planting out clematis seed by the thousand and waiting to see what will happen—and regret that the selections he considered his best were somehow mishandled in commerce and disappeared. But over time a special respect has always attached to those breeders who set themselves a specific challenge, broad or narrow, and then plot a course that ought to take them where they want to go. This is what brought recognition to the breeding program of Frank Skinner in Manitoba, whose goal was to improve cold-tolerance in a wide range of genera including clematis, and likewise to the creative work of Kazushige Ozawa with the integrifolias and U.S. species. It is also the key to Magnus Johnson's breeding of clematis, and especially the Atragenes.

In his The Genus Clematis he tells us something of his aims with these. For him the main lines in his brood of Atragenes resulted from the deliberate crossing of two sets of species. One line proceeded from crossing C. koreana var. fragrans as female parent with seven different species and cultivars, with the design not only of varying the colour range but of adding scent to a mostly unscented range of flowers. The other was the line represented here, the cross between C. fauriei and C. sibirica, which yoked a species that tended to re-bloom more readily than most with the species known to be the hardiest of the group (and, usefully, the one with a pure white flower). From these two lines, his process of selection over several years netted some forty-three cultivars, the survivors in the "koreana" line all being fragrant, and those in the "fauriei" line having a wide range of colour and being, as he says, "more or less remontant,"—i.e., capable of repeat bloom. As yet we have perhaps only a dozen or fifteen out in the world trade, but there are already new cultivars from other growers that clearly show the Magnus strains are being put to continued work elsewhere. In fact he himself suggested some additional lines that might be worth pursuing, including the eyebrow-raising possibility of crossing C. chiisanensis, which is an Atragene, with C. tangutica, which is not. Meanwhile, however, the first priority is to see more of his own selections in our nursery lists. For example, others in this same F2 line include a rich, deep purple now called 'Plum Beauty' and an outstanding white that by exception to the rules retains its original Latin tag, 'Albina Plena.'

Now as to these names. Even as late as 2001 when the English edition of his book appeared, there was no hesitation about the names of these or the other Atragene cultivars. Finding names for so many new ones was always a challenge, increasingly of course as the years went on, but his love for Latin often saved the day. So 'Betina' and 'Campanulina Plena' went into the book just as they had been in his nursery lists for years. But when it came to registering his many plants—clearing them for the record in the now-published Clematis Register and Checklist—a roadblock appeared. According to the International Code of Nomenclature, which the Register was committed to following, Latin is reserved for species names, and disallowed for cultivars named after a certain date. So for Magnus to get his cultivars registered he would be obliged to change the names of a great many, including these two. His deliberations on this made a good, long story, but this is not the place to tell it. The upshot is that in the long run he did make the necessary changes, choosing alternatives that understandably do not always go down well with old friends and colleagues, but one hopes will not injure the plants in the marketplace. However that may be, the fact is that 'Betina' is now to be known as 'Red Beetroot Beauty,' and 'Campanulina Plena' as 'Clochette Pride.'

There is brief comment on the grooming of Atragenes at the close of the piece on C. alpina, Clematis of the Month for March 1998.