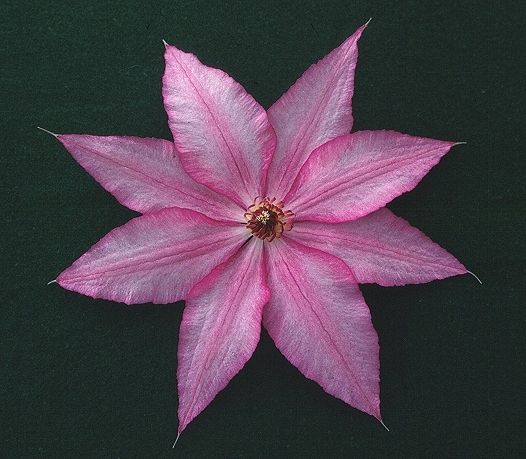 Clematis of the Month for May 2003

We have mentioned before that the striped large-flowered hybrids are not the only ones that have "bars." All the single-flowering ones have obvious midribs, visible on both the front and the underside of the sepal. The striped varieties, often misleadingly lumped together as the "Nelly Moser type," are different only in that their bars display a change of colour—usually, though not always, darker than the surrounding area. Look closely at other single-flowered cultivars, and that track in the middle of the sepal will be there, marked ordinarily by three principal veins, with a network of small creases feathering out from them toward the margins.

Of all these hybrids, none takes a more elegant approach to this structure than C. 'John Warren,' with its bars clarified to the utmost: channels of deep pink with three narrow veins of vivid red running straight down them from top to bottom. Outside those, a middle portion of pale pink deepening to lavender near the margins, and along the very edge a thin line of red. Quite a piece of draftsmanship within an area of 7" to 9", which is often the size of these flowers in their main (late Spring) bloom. What makes it even better is that the face soon turns silvery gray, with the veins showing up even more sharply until they gradually fade away. And to complete the colour harmony, the anthers in the eye of the flower are a deep red, turning brownish with age.

In the right situation 'John Warren' can thus be an unusually striking clematis: the flower comes so close to perfection in its genre. But its markings and colours are delicate, and for its best effect it needs to be seen close up, or given a strongly contrasting background. Fortunately, though it can grow tall, even above 12 feet (3.5m) if not headed, it adjusts easily to container-growing, and blooms well even if cut back heavily after the Spring bloom to keep it comparatively low. So it can be placed where its individual flowers are easily inspected. If it is to be planted at a little distance, the danger is that the flowers can soon begin to look dull and washed-out. So its partisans offer two very useful suggestions. First, to prevent its blanching out prematurely, keep it out of full sun. It is capable of flowering quite well in light shade. Second, consider giving it a host plant or a background of dark green or (even better) purple-leaf foliage. Its own mainly ternate leaves are handsome, long-tapering, and mid-green, a satisfactory foil for companions such as the purple-leaved cultivars of Berberis or Cotinus. Or another especially interesting candidate, suggested by Raymond Evison: Acer palmatum 'Atropurpureum.' These two deserve each other.

'John Warren' is one of the many well-regarded hybrids produced by the English breeder Walter Pennell, whose C. 'H.F. Young' we featured here in December 2000. Of unrecorded parentage, it was introduced in 1968 and named for the former head of horticulture for Riseholme College of Agriculture at Lincoln. By the mid-70s it had joined the phalanx of Pennell varieties offered at home and via export by the Fisk nursery, and it has since been widely propagated. A good indication of its popularity is the abundance of pictures of it on the Web. Quite apart from its garden merit, it hardly ever takes a bad photograph. Perhaps we all know some gardener out there for whom that would be a virtue beyond all its others.