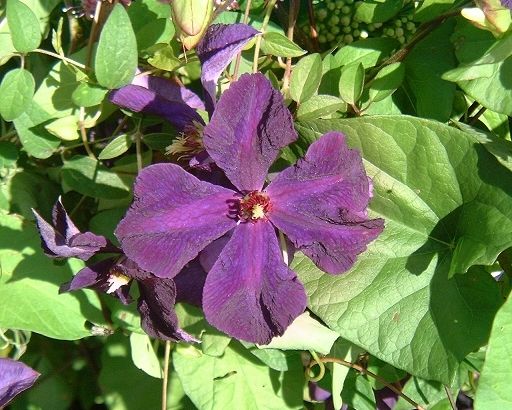 Clematis of the Month for June 2003

This clematis with the formidable-looking name that needs no translation should be starting into its main bloom about now in most of our northern temperate areas. It is a strong grower (9' - 12', 3m - 4m), branching rapidly in its upper reaches, and once established can put out impressive quantities of its midsized deep violet flowers, usually in a big wave at first and then a later, smaller crop toward autumn.

The flowers are anything but uniform, with varying numbers of sepals, wavy-edged and gappy, giving the plant the appealing air of a wildling. Often the newly opened blossom has an additional, rather mysterious property that relatively few of even our finest clematis share—a velvety glow that soon fades away. The red in the sepals sometimes concentrates in the midrib, and that too will normally pale down as the flower ages. But the anthers at the center remain deep purple-red until their pollen is gone. Underneath, the sepals are violet to gray. As with most Group C or III clematis, the bloom will tend to form mostly in the top half of the season's growth. It is up to the individual gardener whether to leave that matter to the plant or coax some of it lower down.

Not yet widely distributed, 'Kosmicheskaia Melodiia' is due to become easier to find as the trade goes on absorbing more of the great hoard of clematis backed up for years behind the Iron Curtain. Of the many interesting hybrids produced in the republics of the former Soviet Union, those that so far have achieved the most visibility in the West are Estonian, mainly from the nursery of Uno Kivistik and his family, and they merit the attention they've received. But we have yet to plow through to some of the best cultivars produced elsewhere in the farms and botanical gardens of the Baltic nations, or at the Nikita State Botanical Garden near Yalta, in the Ukraine. There, as long ago as the 1960s, the botanist A. Volosenko-Valenis began a breeding program that, with the later collaboration of Margarita A. Beskaravainaya, would gradually produce scores of new clematis.

'Kosmicheskaia Melodiia' was one, bred in 1965 (from C. 'Gipsy Queen' x 'Jackmanii Alba,' we are told) and later named in commemoration of the first flight of the Soviet cosmonauts. Some of the other hybrids, to judge from photographs and scanty reports, may be too much like plants already well entrenched with us to justify propagating them for the international trade, but there are a good many Ukrainian hybrids that any fancier of the breed would probably want on sight: the cloudy pink 'Ai-Nor,' for example, or 'Nicholai Rubtsov,' or 'Iubeleinyi-70,' to mention no more, all three of them available here and there but hard to track down. Luckily, we already have C. 'Alionushka' and 'Luther Burbank' in the mainstream, plus the excellent small-flowered 'Paul Farges,' which we featured in an earlier Clematis of the Month. So far, however, we are in no danger at all of having too many of these. Perhaps what we need is a pipeline from Yalta.