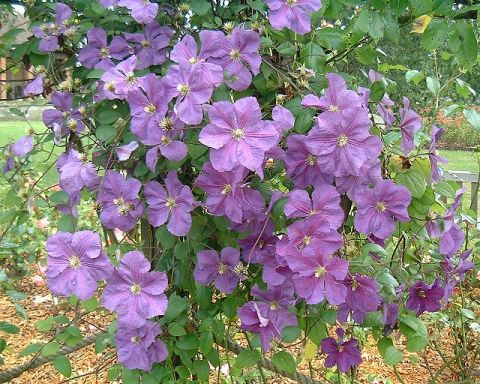 Clematis of the Month for July 2003

In 1872 when Thomas Moore and George Jackman published the first book ever written on Clematis, C. 'Victoria' was already in existence, among the newest of the large-flowered hybrids. Here is what they had to say about it:

C. VICTORIA (Cripps). This is a showy, vigorous-habited variety of the lanuginosa type. The leaves are ternate with very large broad cordate-ovate leaflets, while the flowers are well-formed, close, composed of about six obovate sepals, of a reddish lilac or deep reddish mauve colour, the stamens having white filaments, and pale purplish-brown anthers. It is a showy and distinct variety, and was awarded a First-class Certificate by the Royal Horticultural Society in 1870.

All true, though for many years now, with the parentage generally accepted as C. 'Jackmanii' x lanuginosa, it has been customary to regard the plant as more "jackmanii" than "lanuginosa," mainly on account of its bearing virtually all its flowers on new wood. Hence the standard advice that it be pruned hard in late autumn or early Spring. 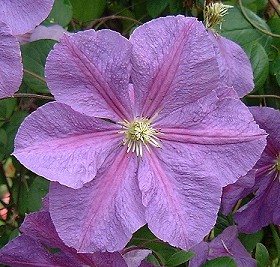 About the colour of the flowers one can always get an argument. Reddish-mauve is a popular diagnosis, but so is rosy lavender, and there is some support for rose-purple, heliotrope-mauve, and even lilac-pink. The vote here is for rosy lavender. The reddish tinge, certainly an identifying mark, is provided mostly by the deeply-grooved midribs, which gradually pale out as the blossom ages, leaving the sepals to fade attractively through soft lavender-blues. The flowers tend to sway and nod slightly on relatively long stems, much in the manner of 'Perle d'Azur.' Early in their season some of them can be up to 6" (15cm) across, but later arrivals tend to be smaller (4.5"-5", 11.5-12.5cm), with less overlap between the sepals. The plant is of easy culture, and depending on its growing conditions may top out anywhere from 8' to 13' (2.5-4m). 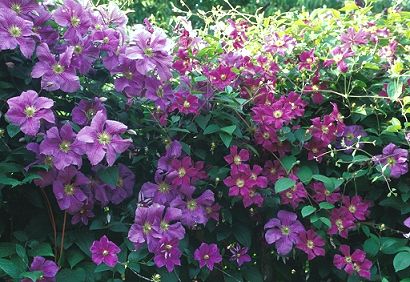 Writers on plant combinations with clematis seldom ignore C. 'Victoria', for it is so endlessly adaptable. Roses lead the parade—Rosa 'New Dawn' jumps to mind, as it does with so many clematis, but we have Barry Fretwell adding R. 'Ophelia', Dr. John Howells (who is fond of 'Victoria') proposing R. 'Handel' or 'Schoolgirl', and Raymond Evison putting in a general recommendation for old shrub roses. Others suggest a plethora of tall shrubs and trees—hollies, for example, and viburnums—and two of our authorities unite in recommending Sorbus cashmeriana as an ideal host plant for 'Victoria.' All to the good. But it should be added that 'Victoria' is wonderfully suited to companionship with another summer-blooming clematis, say a deep purple like C. 'Star of India,' a dark blue of contrasting habit like C. x durandii or C. 'Rooguchi', or the right red or violet—as, for witness, this Ukrainian companion, C. 'Iubileinyi-70,' left behind, alas, when the Woolfendens moved from their last garden to their present one.

Though researchers in horticulture would know the facts and figures, most of us probably wouldn't be able to think of many plants that bear the name of Queen Victoria. Given the extraordinary length of her reign, and the flood of "new" species and cultivars that arrived for gardeners during that span, she seems to have been less than overwhelmed with commemoration in the nursery lists. True, one would hardly expect to have a potato named after her, though she does indeed have a rhubarb and a plum. Her small retinue of ornamentals includes a few notable plants, leading off with the Victoria regia water-lily of South America, and a handful of enduring cultivars in other genera—though sadly it does not extend to Convallaria, "Lily-of-the-valley," reputedly her favorite flower. As it happens, there is another clematis in the list, an apparently bygone hybrid that we would now call x diversifolia 'Queen Victoria.' But some of the plants that we might assume are named for her actually prove to be so only at second hand, like the Victorian Box tree, so-called after the Australian state of Victoria where it first came to wider notice. Occasionally the namesake is some other Victoria, entirely deficient in royal blood. With Clematis 'Victoria,' however, there can be no doubt. The firm of Cripps and Son had a solid understanding of patronage. Though no documentary evidence of it has come to light, they would not have attached their Queen's name to a clematis without asking permission. So presumably they did. There is no hint, however, that she showed up in 1870 to help the RHS award its First-class Certificate.