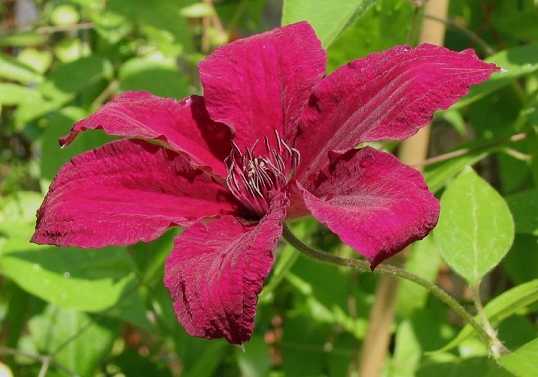 Clematis of the Month for September 2003

What, another candidate for the title of "best red?" It will have to be good, to win out over longtime claimants like 'Ville de Lyon' and 'Ernest Markham,' or nearly a dozen clematis that have had that accolade proposed for them over the years: such stalwarts as 'Rouge Cardinal' and 'Niobe,' and newcomers from several nations, 'Kardinal Wyszynski' from Poland, 'Sunset' from the U.S., 'Allanah' from New Zealand, 'Hainton Ruby' from England, 'Red Pearl' from Japan... And then, besides, there are the cool reds, like 'Duchess of Sutherland.' The Duchess is unlikely to take no for an answer. So what is it that C. 'Rüütel' brings to the competition?

To begin with, the plant is compact, ranging from 5' to 8' (1.5-2.5m) in height at maturity, and it adapts well to all the familiar garden uses for a compact deciduous climber. It is amenable to life in a tub. The foliage is well-mannered, the mid-green ternate leaves holding themselves up well. But what is really arresting about C. 'Rüütel' is a flower that seems dramatically red through and through. It is not just that the sepals, of which there may be anywhere from four to eight, are a deep, strong red. Other good clematis have as deep a red. But no other clematis flower has an eye that at first is even deeper red than the sepals. Even after the pollen is shed and the dark reddish-brown anthers lose their colour, the connectives are still red (as in the photograph), so the impressive depth of colour remains through a long period of fading down. We are perhaps accustomed to thinking of the great "reds" as having yellow or creamy-green centers. Only a few of the familiar ones do not—'Allanah,' for example. But even 'Allanah' has white filaments long enough to put some light in the center of the flower. There is hardly any light colouration at the center of 'Rüütel.' One extra touch of richness, by the way, is all too temporary. In certain lights (again as in the photograph), new blossoms have a velvety grayish sheen. Best of the reds? Well, no one is going to issue an edict on the subject, but this is one of the worthy contenders.

C. 'Rüütel—the word means "Knight"—is one of the many notable hybrids from the nursery of the Kivistik family in Estonia, and is new only in the sense that its debut in the world market was many years delayed. It was bred as long ago as 1982, but has only recently begun to gather numbers outside Europe. According to record it was bred from C. 'Ernest Markham' and the older Kivistik hybrid 'Valge Daam,' a provenance that would explain why it can flower to some extent on year-old wood. In relatively gentle climates it can be pruned sparingly with that in mind, and the first flowers after such a pruning are likely to be somewhat larger than later ones. But where winters are severe, gardeners will lose very little by treating the plant as a Group 3 (C) clematis, and cutting it back sharp before new growth is far advanced in the Spring. Once started up, the bloom is abundant and long-lasting.

How much of an impact this will have on clematis conversation is hard to say, but it is worth reporting that for Estonians, the name of this plant is not Roo-TELL, but ROOtl—or as our friends at Thorncroft Nursery have it, Rootle. (No rhyming is permitted.)