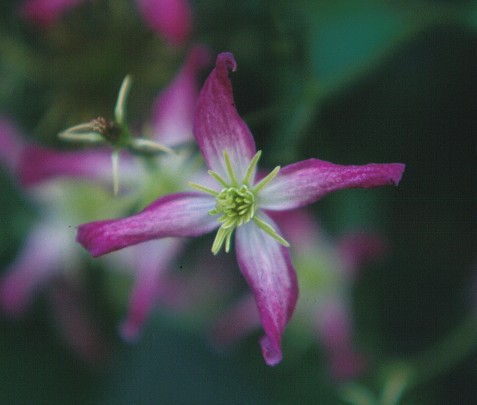 Clematis of the Month for December 2003

We have probably all met gardeners who, whether or not they grin and admit it, are somewhat shy about any plant with a name they doubt they could ever get out of their mouths. For such a gardener our 10-syllable clematis this month might come fairly high in the list. But most of us who know it probably call it simply 'Rubromarginata'—Latin for "red-edged"—when not on our formal behaviour, and would recommend it without hesitation to even a tongue-tied beginner. For it is a quick-maturing, robust climber, easy to train and care for, and its abundant flowers are among the most engagingly different in the roll-call of summer cultivars.

The plant is many-stemmed, capable of growing to 18' (5.5m) or more in some locations, though it is more commonly described as in the 10' to 15' range (3-4.5m). The foliage is mid-green at the start, darkening as it ages, with leaves of varying composition, often with five to seven leaflets on relatively long, twisty stems. Even when the flowers come in midsummer or a bit later, the foliage remains a significant part of the picture, especially at the base, for as with many other summer clematis the floral display is mainly in the upper half of the season's growth.

As for the starlike wisps of flowers, they measure about 1.5"-2" (4-5cm), though owing to their slenderness they may seem smaller. Usually there are four sepals, widely separated, twisty or pinched in the middle, white near the base, but tipped with a colour that may range from red to purple to pinkish violet, depending on the conditions of the season and no doubt the colour-sense of the observer. At the center is a tuft of creamy yellow anthers with greenish connectives that fade to off-white as the anthers shrivel, and accentuate the relative prominence of the eye once the blossom is fully open. The flower has another important characteristic. It is famous for its sweetness of scent. There is less than universal agreement about what scent it is, and anyone may vote, but the leading contenders to date are hawthorn and almond (or, if it makes a difference, marzipan).

'Rubromarginata' behaves much like a massive viticella, as well it might, that species being one of its parents. According to the well-remembered breeder who introduced it in 1862, Thomas Cripps of Tunbridge Wells, it came of a cross between C. flammula and C. viticella (C. viticella 'Rubra'?). It has since been assimilated to another flammula-viticella cross—now long departed—C. × triternata, whence the imposing name it bears at the top of this page. The flammula heritage is most evident in two traits of the flower already mentioned—the prominence of the eye in relation to the slender sepals, and most notably, its fragrance. 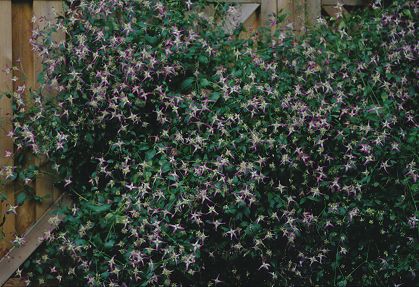 Given the smallness of the individual blossom, the appealing scent, and the probable height of most of the flowering branches, it is worth some calculation to find a place in the garden where this plant can be seen close up, but escaped from by someone with extra-sensitive nostrils who might find a warm-weather jolt of marzipan too much of a good thing. The Toomey-Leeds Encyclopedia comments as one would expect that the plant is suited to growing in large shrubs or small trees, and suggests as other supports a pergola, large obelisk, or trellis. In any of these situations it can be pruned low or to a desired height for the start of new growth, anytime during the cold months.

By the way, it is easy (as with the viticellas in general) to dislodge the high growth from a tall host at the end of the year. All that is necessary is to take hold of a branch at about shoulder height and tug firmly downward—jerking not allowed—until it comes loose. Some bits and pieces may be left on high, but ordinarily they will soon fritter away in the weather.

Searchers for this cultivar in nursery lists may need to look in more than one place in the alphabet. The name has varied over the years as students have kept trying to place it exactly, and as a result it may still be seen listed under different labels. Most often nowadays it will appear under triternata, but an occasional list will have it under flammula or simply 'Rubromarginata.' By any of these names it would sparkle as appealingly, and smell as sweet.

P.S. A personal addition. Not long ago a visitor to my greenhouse, about to pass by a plant of 'Rubromarginata' without noticing it, walked into an errant strand of it, picked up one of the flowers, nuzzled it appreciatively, and said to it as she let it go, "Crinkle, crinkle, little star." It has been hard ever since to banish the thought that some enterprising grower overheard her, and is even now trademarking the plant—such a maneuver has been tried with at least one other clematis long in the public domain—under the name of Clematis 'Crinkle.' Note: this is not a recommendation.