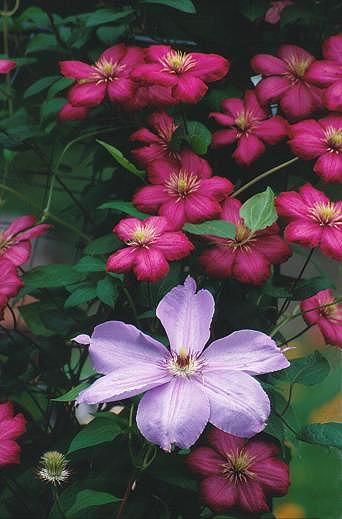 Clematis of the Month for January 2004

The pairing above shows us something that is worth knowing about each of these two clematis. The lilac-blue flower that seems to be claiming the spotlight here belongs to the venerable C. 'W.E. Gladstone,' long renowned as one of largest-flowered of the large-flowered breed—though nowadays it has rivals that can match or even exceed its occasional 10" (26cm). Surrounding it is our featured clematis, 'Ville de Lyon,' that for all its richness of colour might seem at first glance to be a mere retainer to its more imposing companion. But step back a bit, and we would see at once that in this partnership it is 'Ville de Lyon' that dominates, for whereas 'W.E. Gladstone' gains its effect from a comparatively small number of sumptuous flowers, 'Ville de Lyon' is far more profuse, filling the whole scene with its smaller but no less ornamental blossoms. Since it can easily extend to 12' (4m)—much more in exceptional cases—it can be a memorable sight in full bloom. 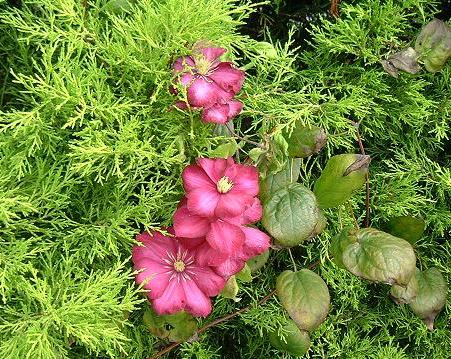 The flower is among the most readily recognized of clematis. It is unusually rounded in appearance, owing to the way its blunt-edged sepals curl underneath at the tips. The vivid colour, usually characterised as carmine or cherry-red, is deepest at the margins; soon after opening it fades down in the interior to a silvery pink or off-white, producing a distinctive bicolour look that is perhaps the way most gardeners picture it in their minds. The central vein in the midrib remains dark red, and is quite prominent. In the center is a tuft of contrasting yellow-topped stamens. Though the size is often given as 6" or even 8" (15-20cm), it should surprise no one if the actual girth at a given season is no more than 4" (10cm). The flowers lose nothing in beauty at that size.

Part of the variability in size depends not just on the season but on the way the plant has been pruned. A generation ago it was often suggested that pruning was optional: one could cater for an early bloom by treating it as a Group 2 (or B) plant, and leaving much of the mature growth on the vine for some relatively early flowers. In mild climates this can work, and such flowers may indeed be large. But one seldom sees this advice nowadays, and there are reasons why for most of us it is better to take the plant very low after the close of bloom in the autumn. Treated so, its first flowers in midsummer may still be comparatively large. Later, as one expects of repeat bloom, the flowers will likely be smaller, but 'Ville de Lyon' is such a strong performer that they will usually be numerous.

One of the best reasons for deep-pruning this plant has to do with its only failing—a failing that plants of a mainly viticella heritage share to varying degrees. In late summer or early autumn the leaves near its base will surely begin to turn brown and drop off, leaving the lower reaches bare and to some eyes unsightly. Gardeners have their choice of two ways of dealing with this: accept it with a good grace, or hide the nakedness from view. That is to say, put something else in front of it, something at least three feet tall and preferably shallow-rooted. Or give it a strong host plant that will offer some camouflage. Hence it also makes sense to start each year's growth with as much as possible of that exhausted tissue pruned away.

The plant needs water in constant supply, but is capable of doing well in light shade.

We owe 'Ville de Lyon' (1899) to one of the most creative of the early hybridists, Francisque Morel, who gave us also 'Perle d'Azur,' 'Comtesse de Bouchaud,' and some of our most cherished small-flowered viticellas. One of the clematis that interested him was C. texensis (called in his day C. coccinea),—an interest that would bear more fruit later on, when his seedlings came into the hands of William Robinson and Ernest Markham at Gravetye Manor. According to his own account C. texensis furnished the pollen for 'Ville de Lyon,' the other parent being a viticella named 'Viviand Morel' that no longer survives. But it is also known that one parent of 'Viviand Morel' was Lemoine's 'Kermesina,' a red that could not have been achieved without the interposition at some point of (guess what?) C. coccinea. So 'Ville de Lyon' arrived with C. texensis on both sides of the cradle. No doubt that helps to explain why it is such an intense and dependable red.