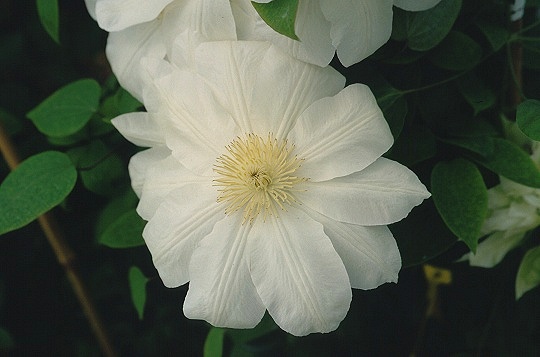 Clematis of the Month for February 2004

Previously on this page we have taken pleasure in featuring three of the clematis of Kazushige Ozawa, C. 'Asao,' C. 'Kakio,' and C. 'Hanajima.' This month we have need of a fourth, in sad commemoration of a career now brought to a close. For this we choose his C. 'Tsuzuki,' a white-flowered hybrid that he named in honor of a village near his home. 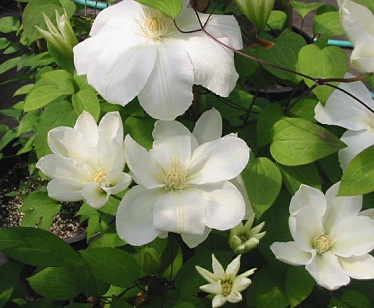 Enthusiasts who have followed his recent work may associate Kazushige Ozawa mainly with the varied cultivars he produced from small-flowered species such as C. integrifolia and the American leather-flowers. Visitors to his nursery in Kawasaki might walk through rows of fences planted with climbers like C. crispa and C. reticulata, set out for open pollination, or (if they were lucky) might be allowed a glimpse at a sequestered red-tip C. texensis he had travelled to Texas to get. And they would think primarily of results like the now famous 'Rooguchi' or a delicious newcomer like his 'Odoriba.' But before he produced any of these, he had spent long years in a more conventional sector of the trade, breeding large-flowered hybrids. It was late in this period, in 1982, that he served up C. 'Tsuzuki.' 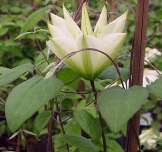 Its parentage is unrecorded, but it is clearly a model patens cultivar, coming into bloom on its year-old wood in early Spring with 4"-5" (10-12cm) flowers and repeating, perhaps with somewhat smaller ones, when summer heat is on the wane. As the buds start to open they are yellow with green midribs, promising a yellow flower, and at that stage it is easy to see that the six to eight sepals have sharp-pointed tips. But by the time they have fully opened the tips tuck downward, and with the sepals deeply overlapping, the blossom tends to look billowy, soft-textured, and nearly round. Early flowers are likely to have a pale greenish bar that soon fades out. And the colour? The Japanese descriptions tend to call it yellowish white. Some Western observers see it as creamy white. For others including your author it is clear, pure white, the kind of white that paper manufacturers would reward with a "92" or better. In these judgments geography matters, and so, of course, does one's individual optic palette. But whatever term we come up with, the crux of the matter is that the shade is bright, uniform, and highly agreeable. The anthers at the center of the flower are unmistakably yellow.

The plant is compact rather than adventurous, with a top height that seldom exceeds 8' (2.5m), so it is suitable for container life or for companion planting with a sturdy shrub or climbing rose, as well as with the standard garden supports. Being a Group 2 clematis, it profits in mild climates from a grooming after the Spring flowers have gone by. It is not particular as to sun or light shade, but is likely to look its beautiful best in dappled sunlight.

In the Clematis Register Victoria Matthews records a round two-dozen hybrids, large-flowered or small-, raised by Kazushige Ozawa. There were more of course, plants that fell out of favour with him—he was a demanding judge of clematis, including his own—or that he did not get around to registering. And some of the best have not yet travelled far from Japan. But C. 'Tsuzuki' is one that has begun to move, and that is fortunate, for it is not only a hardy reminder of its unassuming but gifted breeder, but a credit to the breed.