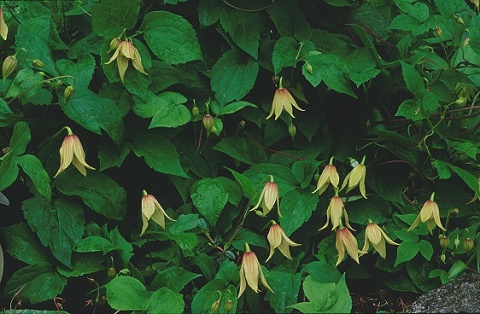 Clematis of the Month for March 2004

In most parts of the gardening world it still may take some leg-work (or Web-work) to find going plants of such Atragenes as this one. Clematis koreana and its variants, though highly valued and sought after by hobbyists, are not yet as widely planted as their cousins the alpinas and macropetalas, and as a consequence the propagation of them is mostly in the hands of specialist growers who produce not very many at a time. But luckily the situation is changing little by little, for a plant like C. koreana var. lutea has only to be seen in bloom to put a light in a gardener's eye.

This yellow-flowered variant of the species makes an interesting contrast with C. chiisanensis, which we presented in March 2001. Both are hardy climbers with a rambling habit, given to branching irregularly. Both have strong, coarse foliage, with leaflets mostly in threes, those of the koreana being larger and making a more prominent show. And both come along in the second wave of Atragenes, often when most of the alpinas and macropetalas have started to go by. But their yellow bells, despite similarities, are quite different (allowing for the fact that both can vary). The chiisanensis bell is likely to be fatter and very heavily ridged along the sides, whereas the lutea has a spruce look, being usually slender and just slightly recurved at the tips. It too has a fluted appearance along its sides, but smooth rather than rough, and more often than not a flush of red at the base. 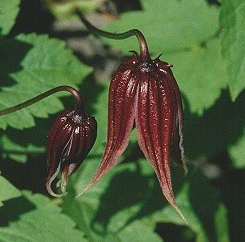 Occasionally, though not always, the blossom will have the unusual spurs at the base of each tepal that are typical of C. koreana proper. Here, for illustration, is the bell of the red-flowered form of C. korea, showing those glistening spurs that probably do more to attract gardeners to this species (and to C. chiisanensis) than any other feature. Shown, too, is the shepherd's crook in the stem that gives Atragene flowers their varying posture in the air—usually nodding, but now and again unexpectedly pointing up or out.

The koreanas in general do not have a regular repeat bloom, but are capable of putting out occasional late blossoms at intervals on their new wood. Since the plant can get into a tangle, it is well worth inspecting it for a grooming when it is through flowering in early summer. Left unpruned, C. koreana var. lutea can grow to about 10 feet (3m), though it is so willing to ramble that it would probably need some coaxing to grow straight up. Pruning is simply a matter of shaping the vine, taking out weak growth or whatever may be starting to head in the wrong direction.

It is perhaps best planted where it can have a dark background, not only to set off the yellow blossoms, but to lessen the effect of the one handicap it has in the eyes of some gardeners. This species is deciduous with a vengeance; its dead leaves can crumple up and turn ashen or black without having the grace to fall off, so that a gardener who finds this distressing is faced with the alternative of deadheading the vine or trying not to notice. Giving the plant a big companion to grow on or a dark background is one way to hide or at least reduce the problem, if problem it is. Many gardeners, of course, accept winter and the deciduousness of life in general, and do not see this as a fault that matters. 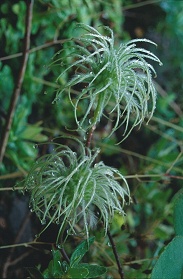 Balance it, indeed, against a big attraction that it shares with the other Atragenes—the ornamental seedheads. When they first appear, the seedheads of C. koreana var. lutea are almost as attractive as the flowers—silvery on the outside, fresh and green at the center—and gradually as the seeds ripen the tails change colour, at last turning wispy gray or white. If the wind doesn't tear them off they may be there all winter long. By the way, it's wise to be careful about removing seedheads or bits of stem very early in the year. At that season the wood is exceedingly brittle, and it is all too easy to bend something the wrong way and have it come off in your hands. Along with an unknown number of potential flowers.