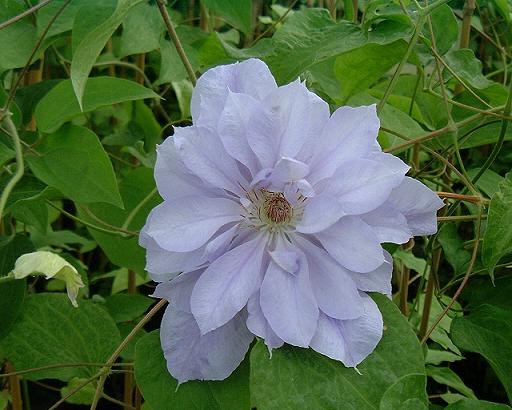 Clematis of the Month for April 2004

No way of telling how many, but there must be scores of gardeners who, looking at the picture above, will say to themselves, "My 'Lady Caroline Nevill' doesn't bloom like that." For this lovely creation belongs to a cross-section of clematis in which full doubling is a sometime thing. Now and again its first flowers in the Spring will have what seem to be two or even three complete rounds of sepals, creating a luxuriant fluffy-textured look. 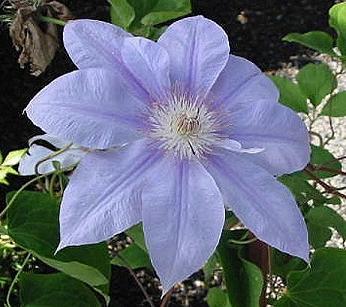 But more often, perhaps (and regularly, it seems, in some gardens) the Springtime flower will be semidouble, made up of a circle of large primary sepals with varying numbers of smaller ones—more like this, which is a fairly typical example of its bloom on new wood later in the year.

However many extra sepals there are in this simpler form of the flower, the impression it gives is that of an elegant single.

In all its forms, double, semidouble and single, the flower is large—usually 6"-8" (15-20cm)— and has a cool dignity that sets it apart. The colour is a pale lavender-blue at first, accentuated by the darker blue at the midribs and by a prominent and distinctive eye. Green at first, the filaments at its center turn white as they spread out, and above them the combination of white anthers and sharply defined purplish-red connectives makes for a rich contrast. The colour of the sepals gradually fades to what is often called "French gray," which for some viewers is even more enticing than the initial shade.

The vine will normally range in height from 6' to 12' (2-3.5m) depending on its growing conditions. Some specimens may take a little longer to get into full flowering trim than the hurry-up type of gardener might wish, but the results are truly worth the wait. Being like all the other doubles a Group 2 (Group B) clematis, the plant is best groomed when the Spring crop has gone by.

As for its origin, 'Lady Caroline Nevill' is another of the classic survivors we owe to the nursery of Thomas Cripps (and Son). Already in this series we have featured notable clematis of theirs from two decades—namely,C. × triternata 'Rubromarginata' (1862), 'Victoria' (1867), 'Fairy Queen' (1875), and 'Gipsy Queen' (1877). 'Lady Caroline' belongs to the earlier decade. It is not surprising that Thomas Cripps would provide Lady Caroline with a claim on posterity. She was in a sense his patroness, married to the Lord Nevill whom he celebrated with another famous clematis. Patroness or not, she was his landlady. The land near Tunbridge Wells on which his nursery stood was leased from the Nevills.