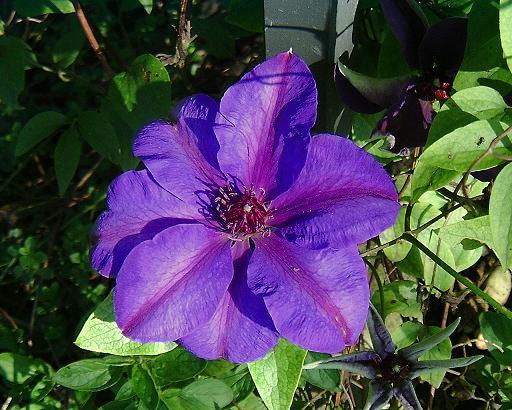 Clematis of the Month for May 2004

Two traits above all account for the steady popularity of C. 'Elsa Späth': reliable bloom on both the old and the new wood, and an arresting depth and richness of colour.

The Spring crop brings larger flowers, anywhere from 6" to almost 9" across (16 - 23 cms) and occasionally semidouble. They do not come on all at once, so they are unlikely to rival the blooming frenzy of some other Spring hybrids, but they make up for it handsomely by offering a long period of bloom. In climates where winter makes a Spring crop doubtful, 'Elsa Späth' can be depended upon to mount a good performance later on, with somewhat smaller but no less interesting flowers.

What attracts and holds the eye in the flower of 'Elsa Späth' is the same trait that has recommended a clematis like C. 'Beauty of Worcester' to breeders, and that has present-day gardeners reaching for such cultivars as C. 'Romantika' and C. 'Edomurasaki'—an extraordinary intensity in its very dark pigmentation. Accounts may differ (as they usually do with colour), but whether we say the flower is blue-purple, violet-purple, or lavender-blue, the fact is that when viewed out of direct sunlight it is one of the deepest-coloured of clematis, and that is the effect it will usually have in a garden planting.

The fat sepals with their broad overlap and short points create a rounded flower, in which the deep-red anthers at the center are not so much a contrast as an intensification. The red midrib seen in the photograph above may surprise some viewers, for it isn't quite a fixture in the flower. Sometimes it is there, sometimes not, depending on how much the greenish bar on the underside is indulged by the seasonal weather. Now and then it will appear as just a touch of red at the tips of the sepals. But truly, in certain lights there is a faint suggestion of rose-colour pervading the whole flower. In any case the red fades out gradually, and the colour lightens as usual with blue-purple clematis, toward blue. The flower hasn't the inexplicable velvety sheen of some few of the hybrids, but there is nonetheless a suggestion of plush in the depth and uniformity of its colour. It is not at all uncommon to hear seasoned professionals in the clematis trade name this as one of their personal favourites.

Though it can get as tall as 12' (4m), 'Elsa Späth' is usually satisfied with much less, and many lists have it topping out at about 8' (2.5m). It is compact enough to be widely recommended as a container plant and robust enough to be a prime companion for shrubs or climbing roses. After a long early bloom it can usually profit from a grooming to take away rough edges and stimulate new growth, but that is just about all the care it ever requires.

The parentage of the plant is not recorded, but it is known to have been bred at the Ludwig Späth Baumschule in Berlin and introduced in 1891. (This is the Späth commemorated by Syringa vulgaris 'Andenken an Ludwig Späth,' and not, despite one misguided report, the discoverer of Spathiphyllum!) It is sold in Australia under the name 'Blue Boy,' and by some nurseries elsewhere—ignoring countless reminders—as 'Xerxes.'

Even calling it by its correct name is not quite as simple as it might be. For years it has been accepted practice in English to use an "e" as a proxy for the umlaut in spelling German vowels: hence "Spaeth" as an equivalent for "Späth." And the name is common enough in English-speaking countries to have acquired the pronunciation "Spayth" (rhyming with "wraith"). But the Clematis Register has recently fired a shot across the bow of this by rejecting the "ae" alternative. Our German friends can accept this with perfect satisfaction, but where does it leave speakers of English? Will they fall to and learn to call this clematis 'Elza Schpayt'? Have we have heard the last of "Spath" rhyming with "path"? It might be unwise to hold our breath until we find out.

Fortunately, however, it seems probable that gardeners will go on planting and enjoying C. 'Elsa Späth' without devoting much thought to such thorny questions. It deserves no less.

[Editor's note: I am still fascinated by the information that is available on the internet, provided of course one knows where to look. In this instance I thank Brewster for bringing the following links to my attention, and thus to yours. Embedded within the web site of the Alnarps Library of the Sveriges Lantbruksuniversitet of Sweden are two covers from catalogues issued by the Ludwig Späth Baumschule from 1898 and 1900. I cannot identify 'Elsa Späth' in amongst the designs, but who knows, she may be there. They certainly don't make covers like they used to!]