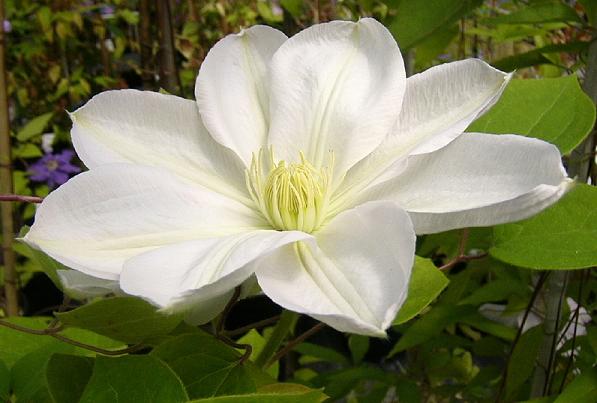 Clematis of the Month for June 2004

Though the Clematis Register has now made it clear that this excellent cultivar should be called simply C. 'Candida', for years it was known by the historically resonant name of 'Lanuginosa Candida,' and most nurseries that list it haven't yet made the change. Nearly all those nurseries happen to be located in North America, for, strangely enough, C. 'Candida' has been scarce almost to the vanishing point for many years in the international trade.

It may be that the original 'Candida' has disappeared (on both sides of the water). We will come back to that.

First, though, to the plant as we know it. It is a strong grower, capable of reaching to 12' (4m), though more likely to top out under 10' (3m), and in some plantings spreading laterally almost as wide over the years. The foliage, light green at first, darkens with age, and is sufficiently upstanding to serve as a good backdrop for the flowers—except at full bloom, when they can form a nearly unbroken skein of white. In the Spring the flowers usually have eight deeply overlapping sepals but may have more, and it is often said that owing to their slightly billowy texture they may look semidouble even when they are not. In size they can vary from 6" to 9" (15-22cm), or in rare instances even larger. Early flowers may have a yellow tinge at the midribs, but when they have warmed up a little, the track becomes pure white, with the veining clearly marked. At the center there is a prominent eye of white filaments and yellow anthers, which leave a small blackened tip behind when their pollen is shed. The later flowers are much the same, but tend (as with most Group 2 clematis) to be simpler and smaller. 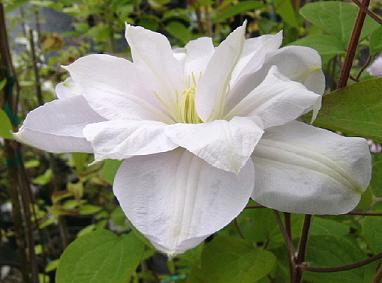 Like most of the large-flowered hybrids, C. 'Candida' can do something out of the ordinary in response to unusual patterns in the weather. Here is proof. Owing (apparently) to a sudden warm stretch toward the end of a prolonged but fairly mild winter, this mature plant was inspired to come out not just single or semidouble, but fully double. It was in every other respect a perfectly standard example of the breed, and returned to single blossoms with the next flowers it bore. Other varieties, by the way, were delivering a huge crop of extra sepals at the same time—what a privilege, to see 'Sir Garnet Wolseley' fully double!— and then reverting to their habitual behavior. One of the most rewarding things about clematis is that capacity to keep nudging us to enlarge our conception of what they can do.

We know that the original C. 'Candida' was introduced in 1862 by Victor Lemoine, who reported its parentage as C. lanuginosa × C. patens. But the plant as originally described has some arguable differences from the one we know today, and it is not quite clear that it still survives. The North American version of 'Candida' has little to nothing of the grayish to lavender shading ascribed to the young flower nor the dark stamens at the center, though it has some claim to the brilliant white (L. candidus: glossy or pure white) of the original.

What is intriguing is that the flower of our current 'Candida' seems virtually identical to that of another cultivar more prominent in the international trade: 'Marie Boisselot.' As we might expect, the formal descriptions of those two varieties do not match up in every particular, and as yet there has been no rigorous attempt to analyse them side by side, independently of labels. The possible connection raises some interesting historical questions. How did 'Candida' lose out in Europe and England? How did the North American trade get its 'Candida,' years before it ever imported 'Marie Boisselot'? And so on. For years students of clematis have been trying to penetrate the confusion of IDs that has hovered over several of the most prominent whites: over 'Marie Boisselot,' 'Mevrouw Le Coultre,' and 'Madame Van Houtte,' as well as 'Candida.' Most of the identities seem now to have been worked out, but there is still the hazard of mistaken labels.

In any case, whatever the botanical differences between 'Marie Boisselot' and 'Candida' might prove to be, that is not a problem for gardeners. The two are all but interchangeable in their cultural requirements, their range of uses in a garden, and their decorative value. 'Candida' is well suited to almost any task a clematis is asked to perform except that it would ultimately begin to dislike even the largest pot, and therefore might best be planted in the ground as soon as it is big enough to go out on its own.

According to The International Clematis Register and Checklist 2002 it is 'Mevrouw Le Coultre' that has the blackened anthers after the pollen is shed! One more bit of evidence that it will take a rigorous side-by-side inspection of these varieties over at least a full season to establish exactly how they differ and to straighten out their names in the trade.