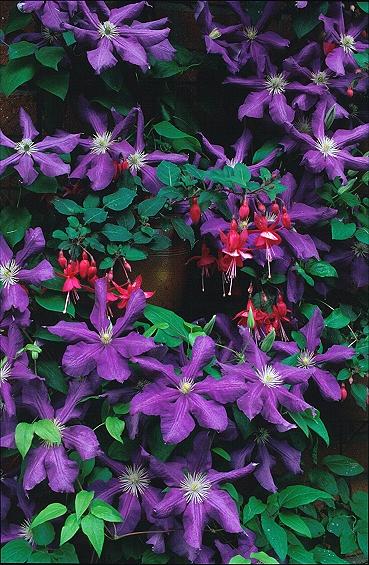 Clematis of the Month for July 2004

The exemplary specimen of C. 'Luther Burbank' above is from the garden of Jan Lindmark, who took the picture (and the one below) and informs us that the Fuchsia making such a sprightly addition to the proceedings is F. 'Display,' offered in some lists as 'Frau Ida Noach.'

Gardeners who meet with C. 'Luther Burbank' for the first time may well say to themselves, "Ah-hah, an American clematis." What could be more likely than that a tribute to the most productive of American hybridists, recognised the world over for the breadth and practicality of his work with both food crops and ornamental plants, would come from an American breeder? But in fact the tribute came from what might seem a surprising quarter, the Nikitsky Botanic Garden in the Ukraine. The clematis-breeding program there, which we are likely to associate most readily with the name of Margarita Beskaravainaya, was led in the 1950s and 1960s by her older colleague A.N. Volosenko-Valenis, and 'Luther Burbank' was one of his contributions. It dates from 1959, and was quickly recognized as a superior cultivar and used in further breeding. But in the western world few of us knew anything more than its name until the Iron Curtain passed into history some thirty years later. Many of the Nikitsky hybrids even now are unavailable or hard to find in the West, but luckily 'Luther Burbank' belongs with the few that have made it into the mainstream. 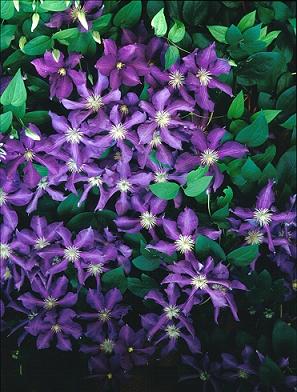 The plant is a strong climber of Group 3 (or C) persuasion, capable of anywhere from 8' to 13' (2.5 to 4m) depending on garden conditions and the pruning it receives. The foliage is a fresh green, the leaves usually pinnate with 3 or 5 leaflets, often of an elongated heart-shape. The first summer flowers may occasionally be semidouble or even fully double, but are ordinarily single, with six rounded, wavy-edged sepals that nearly overlap at the base but draw apart and crimp downward as they expand to full size. That size is varyingly reported (6"-8", 4" to 9"—or, to say it again, 15-20cm, 10-22cm)—and as usual with clematis the later flowers are likely to be smaller and less full than the first crop. The color is most often reported as blue-violet or violet-purple. As the blossom ages it fades toward blue and a pale track appears at the midribs. The stamens at the centre are almost as straggly as those of 'Jackmanii,' its seed-parent, though prominent enough to make a good contrast. (Filaments white, anthers pale yellow, connectives greenish and barely noticeable.) What is most noticeable of all in a well-tended specimen is the sheer copiousness of the bloom.

Its size and habit make it a doubtful candidate for container planting, but otherwise it adapts readily to the whole range of garden uses. It is big enough for companion-planting with trees and tall shrubs, tractable enough to be trained onto arbors or trellises or along walls or fences, and will even endure lying on the ground, though somehow that does not seem to comport with its dignity. As for pruning, it is a standard example of Group 3, with all its significant bloom on new wood.

It would be interesting to learn exactly what motivated its breeder to name this particular plant for Burbank. Was it respect for the whole body of his work? Or some particular element in it? Was it simply his experimental breeding of clematis? Burbank had a special interest in C. texensis, and, as it happens, pollen from that species was in the "mixed pollen" that Volosenko-Valenis crossed with C. 'Jackmanii' to produce this hybrid. And does it figure into the case somehow that the city of Sevastopol is just down the road from the Nikitsky home base, and Sebastopol, California was the site of one of Burbank's experimental fields? Bits and pieces. We do not know how (or if) they fit together. We need—for this and much else—an informant from the Ukraine.