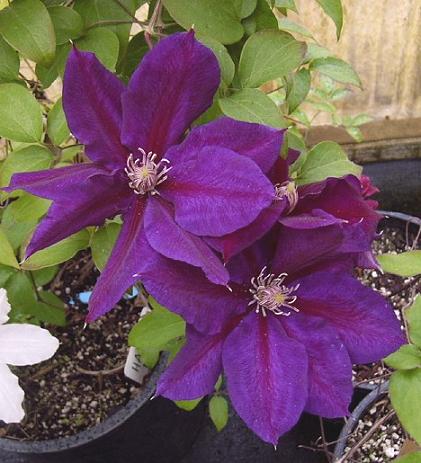 Clematis of the Month for August 2004

Clematis 'Julka' is a newcomer in the world market, but already it has won honours in England and The Netherlands, and we take a special pleasure in featuring it just as this Society is welcoming its breeder, Szczepan Marczyñski, as our new President. C. 'Julka' is one of three recent hybrids we tend to think of as "Szczepan's ladies," C. 'Barbara' named for his wife, C. 'Hania' named for his mother, and this one named for his youngest daughter Julianna—Julka for short. 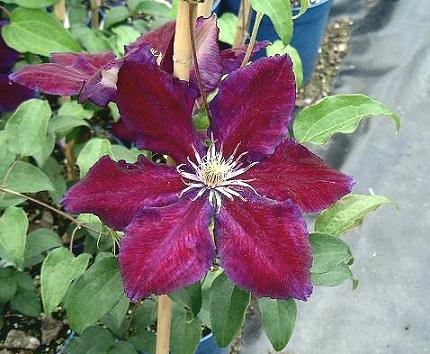 What may be most interesting about this eye-catching clematis—as may be seen instantly in the two pictures—is the striking changeability of the main colour of the blossom. Accounts so far have stressed the deep violet-blue version, but in a considerable number of the available photographs the flower is unmistakably more red than blue. In both guises it is a satisfyingly full, velvety-textured blossom, with sometimes as many as eight but more often six barred sepals, and a rich-looking center of light-coloured anthers and their long purple-red connectives.

What is clear is that the difference in colour depends mainly upon the deep purplish-red bar at the midrib of the sepals. In the "blue" version it is vivid enough, but narrow, with just a little feathering into the area of dark violet-blue; in the "red" version it bleeds out boldly almost to the margins, which retain the bluish tone. Well, but a gardener may ask, in my garden which colour will this flowery chameleon put on? A good question, and as yet we do not know all the answers. So far there isn't quite enough anecdotal evidence from different parts of the world to pin down exactly what triggers the difference, or whether it is regularly subject to seasonal change. Szczepan's own finding is that the colour can depend on several factors, including of course the climate, which, as we know, can often turn a familiar clematis into one we aren't sure we've seen before. In his own plantings in Poland he finds the first blossoms of the year are dark violet with a narrow bar—the "blue" version—and later ones on the new wood incline to the redder violet with dark edges. If this turns out to be standard behavior, as seems likely from first starts in Oregon, it might make an unusual selling point: two clematis for the price of one!

The foliage of 'Julka' is often purplish at first, but soon a dark green, the leaves usually simple or ternate with long ovate leaflets, often sharp-pointed. It makes a compact vine, likely to top out at about 7' (2m), and so a good candidate for container planting. It would also make a good companion for any number of light-coloured shrubs, and happens to be a spectacular foil for its (nominal) grandmother C. 'Hania.' (Its real mother, by the way, was reportedly 'Mrs. N. Thompson,' which may help explain the intensity of the colours.) Pruning can be minimal, a simple matter of removing spent stems or unwanted cross-branches whenever they get too noticeable. One word of caution, however, as to care: for the best and longest-lasting colour, 'Julka' should have some protection from full sun.

As for the honours mentioned at the start, C. 'Julka' was awarded the silver medal at the Plantarium 2002 Arboricultural Trade Fair in Boskoop, and the next year it won a silver medal at Chelsea. Experience so far suggests that the honours are well justified.