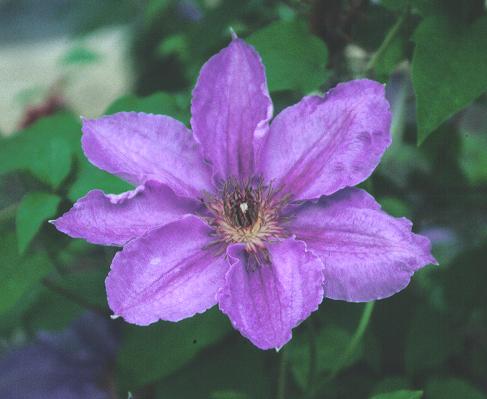 For younger devotees of clematis, the name of Jim Fisk may be known primarily through his long-popular book, Clematis, Queen of Climbers, or the hundreds of references to him in the recent literature. But to those of us who go back a long way the news of his death last month at the age of 92 brought not only a personal sadness, but recollection of a man and a nursery that contributed vitally to the advancement of clematis in the second half of the last century.

From its modest beginnings in the early 1950s the Fisk nursery in Suffolk developed year by year into the new center of a clematis trade reaching far beyond Britain, through its owner's unheard-of willingness to send plants abroad and his ability to get them there alive. Meanwhile the yearly catalogs that appeared from Westleton grew into a standard for clematis lists that still endures, even though the Web has offered a radically changed alternative. No one exceeded or even approached the number of good new clematis—his own and others'—that Jim Fisk introduced in the middle decades of the century, and if he introduced them that meant they would probably soon be grown in Japan and New Zealand and North America, where such bounty from abroad had not been seen before. In recognition of his services to clematis this Society elected him an Honorary Fellow in 1990, and in 1998 he received an M.B.E. for his services to Horticulture from Prince Charles at an Honours Investiture at Buckingham Palace. We want to record our profound respect for him here, and think that no clematis would have pleased him more for that purpose than this handsome one of his own breeding, C. 'Alice Fisk.'

Just as with roses and other treasured plants, the annals of clematis are full of hybrids named in compliment to individuals—public figures, patrons and friends of the growers, and members of their families. The lists bulge with examples, old and new: 'Barbara Jackman,' 'Jan Lindmark,' 'Comtesse de Bouchaud,' 'Julka,' 'Prins Hendrik,' 'W.E. Gladstone,' 'Nelly Moser,' 'James Mason,' 'Betty Corning,' 'Kiri te Kanawa,'—on and on they go, and what stands out most from a review of them is that comparatively few were named posthumously. The main intent of naming a clematis after an individual has seldom been to memorialize the dead, but nearly always to recognise and honour the living. Of course, in the end a namesake cultivar that establishes itself in the trade is destined to do both. So it has been with C. 'Alice Fisk,' which Jim Fisk bred in 1964 from a cross between 'Lasurstern' and 'Mrs. Cholmondeley' and named for his mother, at a time when she was not only alive but active at the nursery, and amusingly ready to keep a boorish visitor in line with what was known as "Granny's look." Among his other hybrids two, 'Gillian Blades' and 'Gladys Picard,' were named for secretaries at the nursery.

C. 'Alice Fisk' is a relatively compact climber, not likely to exceed 8' (2.5m), and hence suitable for container-growing or gardens on a small scale. It flowers in the Spring on last year's wood and again later on its new wood, so any corrective grooming is best done just after the close of the early bloom. The Spring flower can be anywhere from 6" to 8" across (15-20cm), slightly cupped at first but flattening out as it expands. It has six to eight sepals, long-tipped, wavy-edged (or as its breeder liked to say, crenulated), and slightly paler along the pronounced midribs. Their color is almost always given as wistaria blue. In the center is a prominent eye dominated by the dark brown anthers. As usual with Group II clematis, the new-wood flowers are likely to be somewhat less opulent, but still well-coloured. Since it can lose that colour rapidly in full sun, this is a cultivar that may best be planted in light or partial shade.

As a longtime overseas customer, I shared some of the benefit of Jim Fisk's rich contribution to the clematis trade. Letters from such a busy nurseryman were understandably rare in the 70s and 80s, but when they came they were as companionable as his book, and full of information. For a number of years I imported clematis from him that were unobtainable from any other source, and they formed the basis of my collection. For me one favour of his represents the level of attention he paid to his customers. For two years in a row I had tried to import from him plants of C. rehderiana, and both times the root systems were simply too fragile to survive such a hard trip. The next year I ordered them yet again, and again he obliged, but this time—evidently as grimly determined as I was—he sent two of his stock plants. Duty can go no further. They are alive to this day. I have no doubt that comparable stories lie in wait from friends of his in many parts of the world.