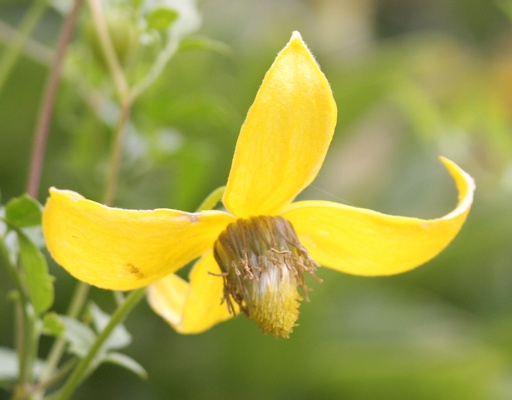 Clematis of the Month for October 2004 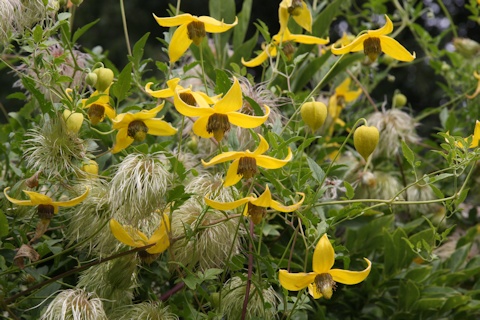 It was only a few years ago—hardly more than twenty—that gardeners in general began to expand their interest in clematis beyond the glamourous range of the large-flowered hybrids. There were some modest exceptions: "herbaceous erect" species like C. heracleifolia and C. recta could be found if one knew where to look, and various selections and hybrids of C. viticella were offered by specialist nurseries, though comparatively few gardeners had yet caught up with their charm. And of course the montanas were always a separate case. But at least two of the small-flowered kinds have had a long history of popularity in the trade, C. terniflora, the "Sweet Autumn Clematis," (which we featured in November 1998) and C. tangutica.

The strong Asian vine with the bright green leaves, yellow bells and shiny seedheads has been a fixture in the trade since its introduction to the West around the start of the nineteenth century, and today is represented by several fine forms or hybrids besides the excellent var.obtusiuscula—among them 'Aureolin,' 'Corry,' and 'Lambton Park.' All these are vigorous plants, capable of making a big display when climbing on an arbor or trellis or spreading through a bushy host, but ironically it is their vigour that has sometimes kept them out of some gardeners' plans: they need plenty of room. It was this that made the introduction of C. 'Helios' in 1988 such an event. For 'Helios' was offered by its raiser, the Proefstation voor de Boomkwekerij in Boskoop, as (in effect) a half-size tangutica with full-sized leaves and flowers, and hence an unexpected treat for gardeners with limited space.

It has lived up to that report. It has the appealing irregular-looking leaflets of the species, toothy and fresh-coloured, and the famous tangutica trait of producing its blossoms in waves, with time in between for the seedheads to start forming, so that by late summer in a good year the vine is a froth of seedheads and flowers. (These, by the way, need to be taken down in a sharp winter or early-Spring pruning, so that the plant will retain its habit and produce the 4'-6' of new wood for next year's bloom.) 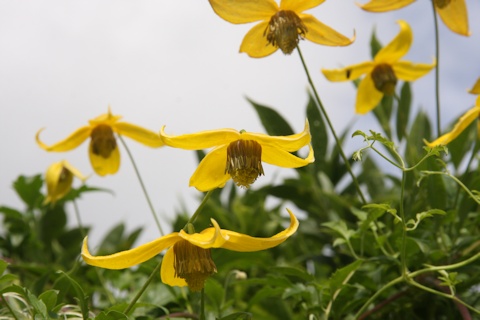 The flower of 'Helios' is a fairly tough-textured four—sepalled bell of clear yellow that opens out wide to a wingspan of up to 2.5 inches (6 cm) and usually recurves slightly at the tips. At the center is a vividly contrasting brush dominated by brown anthers. According to some lucky nostrils there is a scent of cocoanut.

Though it has been reported that this plant comes true from seed, that is not everyone's experience. It is in the first place a hybrid (thought to have resulted from a cross between C. tangutica and another Dutch success, C. 'Golden Harvest'). In at least some instances it shares the fate of other offspring of C. tangutica— seed of it will likely revert to the natural variability of the species. Seedlings generally look promising and clearly belong to tangutica, but they can vary in height, in the character of the flowers, and—quite noticeably—in vigor. So gardeners hoping to duplicate their plants of C. 'Helios' might be safer doing it by way of cuttings rather than trusting to the seed.

Note: the taxonomy of section Meclatis, to which this plant belongs, is extremely complex, and in a report of this size it's impossible to crowd in all the relevant details. For a more extended look at variations amongst forms and cultivars of C. tangutica and the related C. tibetana viewers are referred to the discussion on pp. 171-73 of Christopher Grey-Wilson's Clematis the Genus (2000).