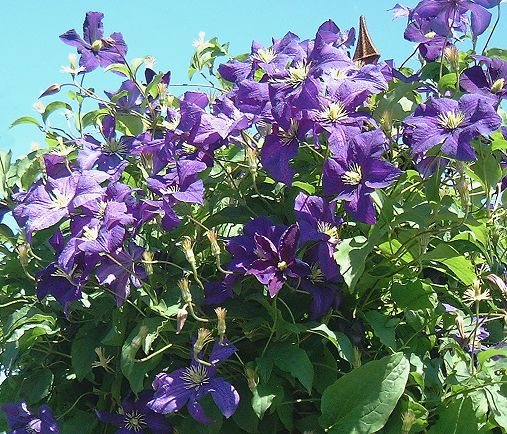 Clematis of the Month for November 2004

Of the many clematis that are named for countries or regions, nearly all are species, that being one of the old-reliable conventions that taxonomists have available when they are proposing names. We think straight off of such clematis as koreana, tibetana, sibirica— or for regions, texensis and columbiana, or even virginiana, though that one carries two meanings and hence may be a scholarly pun. But it is unusual to find a hybrid clematis named after a nation. There is the Ukrainian C. 'Kuba,' and with a stretch we could add 'Guernsey Cream,' but beyond that it seems the pickings are few, at least in modern times. Our clematis this month is doubly unusual in that regard, for its name is not only the name of a country, but the aboriginal form of that name.

Aotearoa is the Maori name for New Zealand—literally, "Land of the Long White Cloud."

The clematis, raised from a chance seedling by Alister Keay in 1992, behaves in nearly all respects like a Jackmanii hybrid—quick to take off, abundant in its midsummer bloom, capable of a good repeat crop toward autumn, and adaptable to all sorts of garden conditions. With encouragement it can reach a height of 12' or more (3.5 m) in a season. The Spring flowers usually have 6 sepals, slightly overlapping, wavy-edged, and recurved at the tips—a sharp contrast to the greeny-yellow stamens. The size may vary from 3 to 5 inches (8-12.5 cm). Later ones tend to be smaller and less full, but that is not always the case, for this plant has a capacity for surprise, as we shall see. 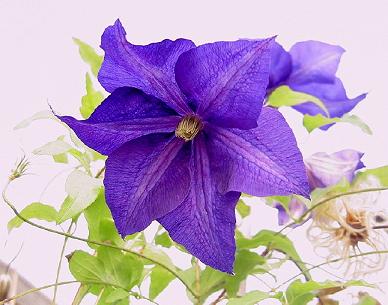 The colour of the Spring flower is a deep violet-purple. But under certain conditions the later bloom can turn out to be a startlingly different colour, a strong and vivid blue. We've spoken previously of the marked colour-change that can occur in C. 'Julka.' Here is another case no less surprising. 'Aotearoa' has not been under observation long enough to make clear just why or under what circumstances this may happen, but it seems likely to be connected to long-range developments in light patterns and the weather.

Now as to one more matter that might or might not be a surprise. It's obvious that the name 'Aotearoa' contains more vowels per centimeter than that of any other clematis, and we know that every one of them is pronounced.

But what is the pronunciation, if we want to be quite authentic? We asked the owner of the Yaku Nursery in New Zealand, Peer Sorensen, and he sent us this key in his typical jocular style:

For some of us, shifting gears on those first two syllables may require practice. Fortunately, getting attached to C. 'Aotearoa'—figuratively speaking— requires no practice at all.