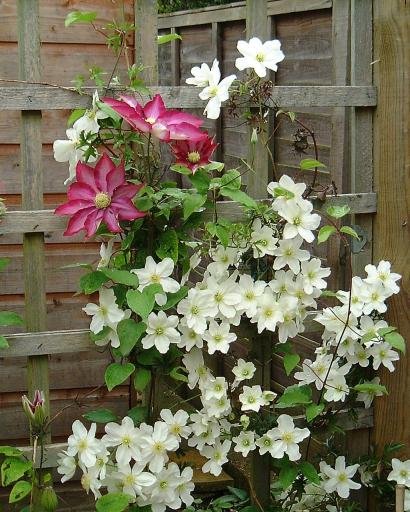 Clematis of the Month for December 2004

When we featured Kazushige Ozawa's C. 'Kakio' PINK CHAMPAGNE™ as Clematis of the Month in April 2003, we showed a picture of it from the Woolfenden's garden with its blossoms supported like jewels by a wonderful white-flowered companion. Here it is C. × cartmanii 'Avalanche' that fills the scene, with 'Kakio' in a (highly articulate) supporting role.

'Avalanche' has turned out so far to be a doubly appropriate name, for the plant has not only proved capable of an almost montana-like bloom in the Spring, but it has met with a rush of popularity in the temperate regions suited to it. Raised by Robin White of Blackthorn Nursery in 1990 and registered by him in 1996, it is a protected plant (PBR, PPAF) and can command a relatively high price, but since its accession by Guernsey Clematis Nursery in 1999 it has enjoyed broad distribution. 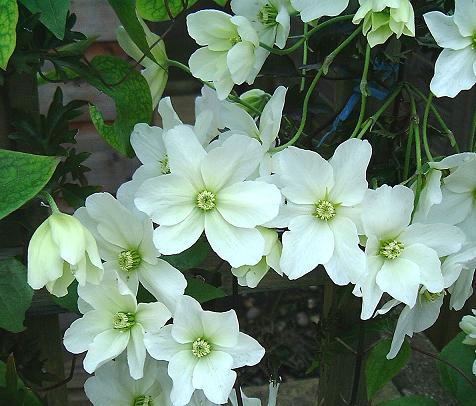 The reasons for its quick rise in favour are easy to see. It could earn a place in a garden simply for its foliage. It is evergreen and a climber, though a climber with a difference, for above a certain height the stems may sometimes need to be tied in. If they lose hold they will arch out in long graceful strands. At maturity these can top out at anywhere from 10' to 15' (3m to 5m.) The leaves are ternate, on dark green or slightly purplish stems, and impressive in their own right, finely-dissected, suggesting a brawny, oversized version of parsley.

The buds look at first as if they might open into bells, but in fact they open flat, into outward-facing flowers with 4 to 6 blunt-tipped sepal, ribbed at first with yellow-green but maturing to pure white. On average the flowers, all of which are male, are about 3" (7.5cm ) across. In the center is a neat brush of anthers that have a pinkish cast at the start but soon turn yellow.

There is no repeat bloom; 'Avalanche' does its whole brilliant act in the early Spring, on its year-old wood. Any major grooming or sizing-down that it needs should wait every year until that bloom is finished.

Gardeners have been finding a variety of uses for the plant. Some choose to grow it on in containers for a while before planting it out. Others deploy it along a fence in a sheltered location. Another favourite option is to use it as groundcover. Of the two parents represented by the formula C. × cartmanii— namely, C. marmoraria and C. paniculata— the former is a trailing species, and both 'Avalanche' and its popular relative 'Joe' inherited the trait. It is quite natural for them to lie comfortably on the ground. So why not plant 'Avalanche,' the taller and more vigorous of the pair, to do just that, or trail its flowers down a bank or a wall?

The only major limitation on its use is climate: its growers recommend it for Hardiness Zones 7 to 9, and caution also that in warmer areas it is best kept out of full sun. But even at that it appears to be proving a likelier candidate for planting-out in our temperate gardens than many of the other admirable but tender New Zealanders we would like to grow. Of course, like the others, it is also thoroughly at home in a greenhouse with just enough heat available at need to ward off a hard freeze.

In some lists this plant may appear under the synonym C. 'Blaaval.' That is the cultivar name added by the Guernsey Clematis Nursery. Under its original name 'Avalanche' was accorded an A.M. in 1999.