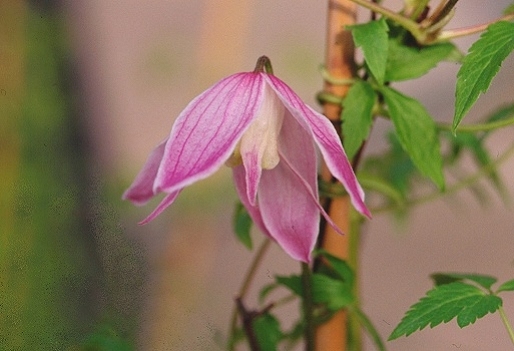 Clematis of the Month for January 2005

We are accustomed to thinking of the Atragenes—C. alpina, C. macropetala and their kin—as Asian or European, and their hybrids as bred mostly in England or Sweden, but here is a noteworthy member of the clan that came to us from Canada. It was bred by Frank Leith Skinner at his farm near Dropmore, Manitoba, from a cross between C. macropetala and C. alpina. Nurseries have habitually listed it under C. macropetala, and some still may.

The flowers of 'Rosy O'Grady' can vary from one crop to another in fullness and hence in the way they present themselves on the vine—usually few-sepalled and arching lightly on their stems like the alpina parent, but in an occasional season more double and filmy-skirted, hence more like the macropetala. (It is a trait that this cultivar shares with some others of similar extraction, such as 'Frances Rivis' and Raymond Evison's 'Frankie.') In either state of bloom the pink sepals tend to draw apart enough to display the creamy "core" of petaloid staminodes at the center—whence the combination of pink and creamy-white that gives this cultivar its special charm.

As with the others of its kind, its principal bloom is in the early Spring. Skinner himself credited it with autumn bloom on the new wood, but perhaps the more usual experience is an occasional sprinkle of late flowers. By that time the center of interest will usually have passed to the other great attraction of the Atragenes, the eye-catching seedheads, first green, then golden and shiny, and at last white with age.

Apart from the caution that they are cold-natured and hence ill-suited to climates with hot summers, Atragenes like 'Rosy O'Grady' can be recommended as relatively trouble-free and easy to grow. They are ramblers as much as climbers and may require some shaping up or reining in from time to time. But a light grooming after the main bloom is likely to be all that is needed—and sometimes not even that.

The breeder of 'Rosy O'Grady' was in the truest sense a pioneer. As a youth homesteading with his Scots parents near Dropmore, Manitoba he developed an active interest in the native flora, and when in 1900 he got a homestead of his own, it was soon as much a nursery as a farm. "Skinner's Nursery" would become important over the next sixty years as the source of an amazing wealth of introductions, many of them unexpected and totally new to the vast stretches of the Canadian prairie country. New strains of roses, lilies. chrysanthemums, honeysuckle, mock-orange, lilacs, flowering crab—and economic crops as well, including several varieties of fruit trees from the Prunus family. The list goes on and on. His steady aim throughout was simply (simply?) to find or breed plants that could stand up to the prairie climate without losing any of their character in the process. To that end, at his own expense he foraged all over the world for strong-growing cultivars and for their seed. By the 1940s it was no extravagance to regard him as, in the words of one academic admirer, "the Luther Burbank of Canada."

And where does 'Rosy O'Grady' fit in? Skinner had an enduring interest in clematis, and worked with several exotic species, but in the long run thought well enough of only a few of his clematis hybrids to name and list them as his. In the summing-up of his life and work that he wrote in late age (Horticultural Horizons: Plant Breeding and Introduction at Dropmore, Manitoba [Winnipeg] 1967) just two Atragenes made that honour roll—his distinctive macropetala × sibirica cross 'White Swan' and 'Rosy O'Grady.'

In 2002, 'Rosy O'Grady' won an AGM (Award of Garden Merit) from the Royal Horticultural Society. It is not recorded whether anyone sang "Sweet Rosie O'Grady" in celebration, but surely it is the least the RHS could do.