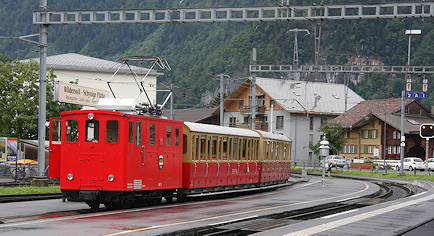 After the conditions for our mountain walk of yesterday, we started the drive to Schynige Platte with some trepidation. Marianne and Fisch Fistarol had been in contact with Mr and Mrs Hegg, who run the Alpine Garden and would be showing us around. They had warned her of the weather conditions, but it was decided we'd go there and hopefully be able to visit.

The drive to the base station of the rack-and-pinion mountain railway which would take us up to Schynige Platte was quite uneventful, in fact the weather didn't seem too bad at all. There were very pleasant views of mountain peaks and valleys and we were all looking forward to a promising day. 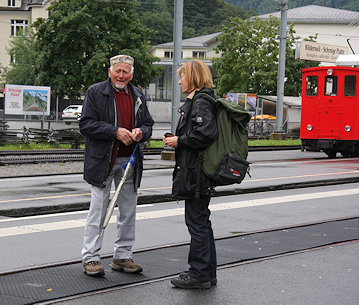 As we waited to board our train, a figure emerged from the end of the platform and made his way towards us. As he approached we could see it was Hans Reudi Horn-Gfeller, member of the Society and winner of one of the first Golden Clematis Awards. He lives at Merlingen, overlooking Lake Thun and fairly close to Schynige Platte, and had come to join us for the day. 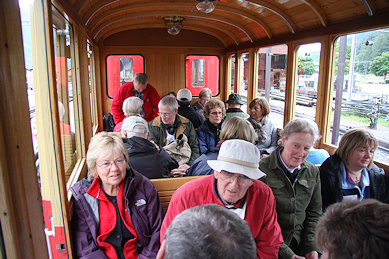 The little train that would take us to the Alpine Garden was ready to go so we boarded our reserved carriages and the train started it's way up the mountain. An interesting journey, the majority of the track is single line with a couple of passing places. 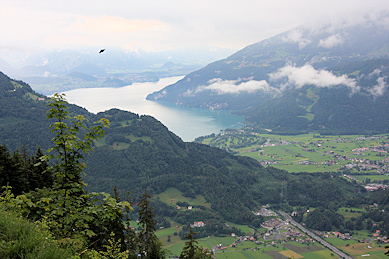 Early on there were fantastic views of the surrounding mountains. There were also birds of prey circling and soaring on the thermal air currents, as can just about be made out in the full sized version of the picture. 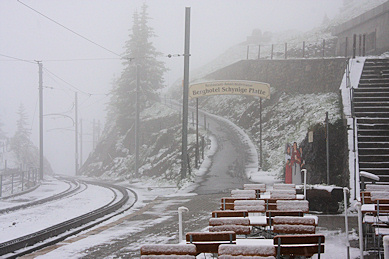 As the train climbed higher, one noticed firstly that we had lost the sun, then that the clouds were thickening next that there was snow on the ground and finally, that it was indeed snowing. By the time we reached the tip station, it was snowing quite hard and visibility was down to a few metres.

We took shelter in a meeting room of the Alpine Garden and Dr Hegg used this time to give a short history and description of the garden. 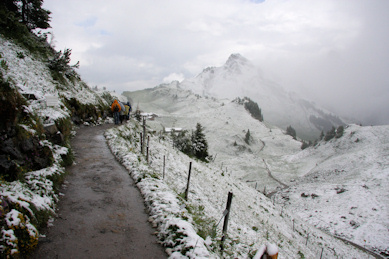 However we hadn't come all this way to let a little(!) snow stop us, so buttoning up coats we set off around the garden. 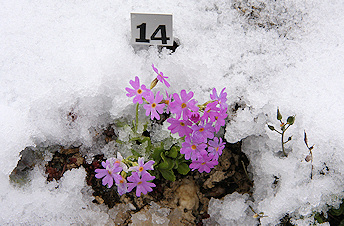 I call it a garden but it's actually over 8000 square metres of mountainside at an altitude of around 2000 metres, laced with paths and containing examples of around 500 of the 620 species of plants found above the treeline in the Swiss Alps, like the Primula farinosa below. 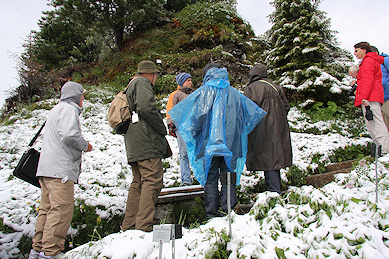 Both Dr and Mrs Hegg acted as guides, one in German, the other in English, as we made our way around the garden. Fortunately the snow eased a little and then stopped completely. But best of all, the clouds lifted for a short period to give us a view of the mountain peaks that surrounded us. The landscape was magnificent, the Alps so majestic and the snow on the ground gave a terrific atmosphere, as well as slippery paths! 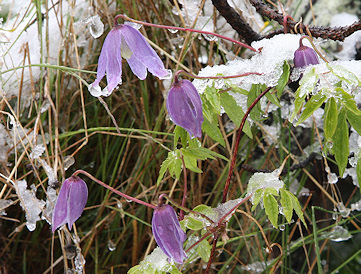 Then a cry went up "Clematis". The various groups started to converge on the rocky peak where it had come from and, to all our pleasure, the Clematis alpina which was in flower. The delicate violet-blue flowers, particularly against the snowy background, were beautiful. 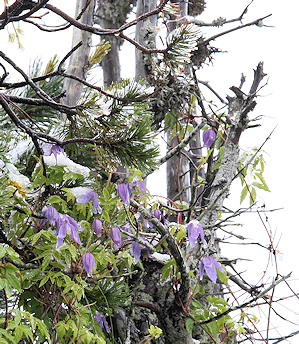 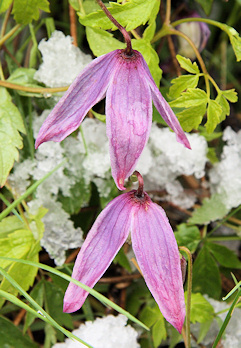 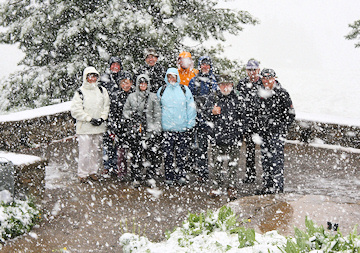 The improvement in the weather didn't last for long, it was soon snowing again, so time for a quick photo before we made our way past the station to the restaurant where lunch was to be served. 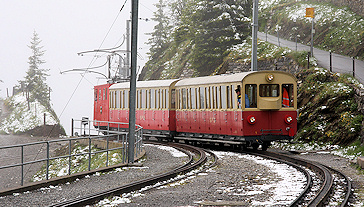 As we took the train back down to the lower station and our coach, we talked of the wonderful garden on top of a mountain, and the dedication of Dr and Mrs Hegg, who apparently had been out early that morning brushing snow off some of the plants so that we could see them better.

Plant hunting in the Gastern Valley

We had about an hour drive to Kandersteg and our hotel for the night. The main building was a classic Swiss Chalet style house, quite large and very grand. But it was a quick turnaround and out again, on small coaches this time, to Gasterntal and a plant-hunting walk. 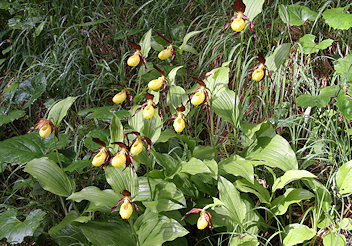 We started with tea/coffee and cake, to fortify ourselves for the walk ahead. As we set off down the track, there were a few spots of rain and, looking to the skies, it was obvious that things were likely to get worse. However our guides were soon pointing out various plants by the side of the track and for much of the time we forgot about the weather.

We'd been going for probably an hour when our guide turned off on a small path through fairly dense forest. And then we saw them, hundreds of wild orchids, as far as one could see, in every direction. 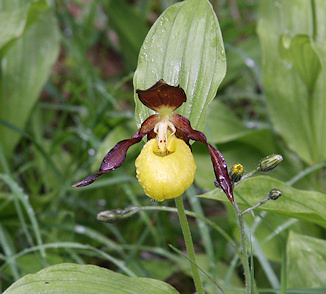 Our guides obviously new the territory very well and knew exactly where to look. As soon as you became accustomed to them you realized they were everywhere. Absolutely beautiful and just growing wild. 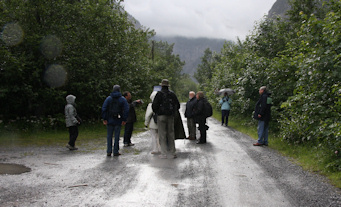 As we started walking back to where Clematis alpina should be found, the rain became somewhat more intensive, and by the time we reached the Clematis alpina it was raining quite hard and the light was fading rapidly. 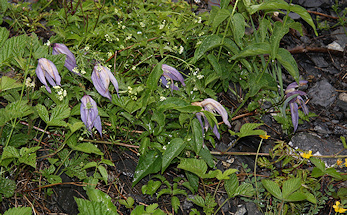 It was growing about 3 metres back from the edge of the track, in the shrubby edge of wooded ground. Unfortunately there had been two clusters, but one had been destroyed by a fallen tree. The flowers were a little past their prime, also rather bedraggled with the rain, but there's still a thrill to see a clematis in it's natural habitat.

Dinner that evening was magnificent, and very welcome after the very successful but quite long and tiring day. 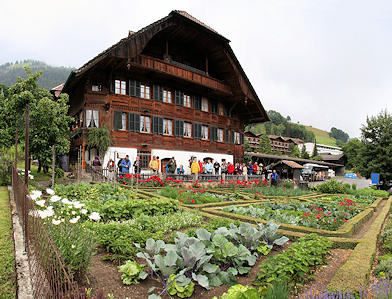 Day Four was listed as a day of Swiss culture and we certainly experienced a wide variety of aspects of Swiss life. As our coach pulled up at one end of the small village of Erlenbach in the beautiful Simmental Valley, Herr Hofer emerged to greet us and take us on a tour through his village. We started with the farmer's garden of Frau Reber. She lives in a classic, and I believe quite old, Swiss chalet-style house, set back some 20 - 30 metres from the main road through the village and virtually the whole of her front garden is given over to growing vegetables and fruits. It was so neat and tidy, not a weed to be seen, and with some very good looking produce. 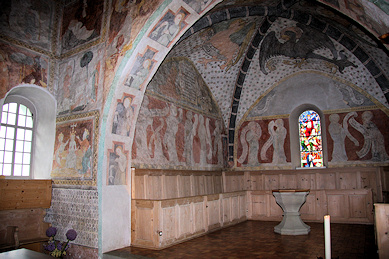 We moved on, down the high street with Herr Hofer pointing out a number of old and interesting buildings, until we reached the church. Herr Hofer is the church organist and has also made a detailed study of the history of the church, so having climbed the many stairs leading up to it, we entered. 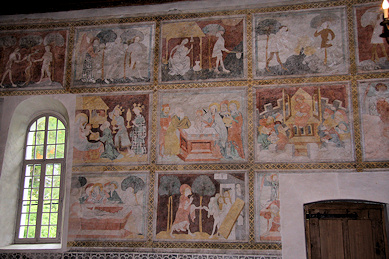 I believe the church dates from around the 13th century. It is certainly old and also has been modified, extended and changed over the centuries. Probably it's main claim to fame are the wall paintings and Herr Hofer gave us a comprehensive description of the origins and meanings. 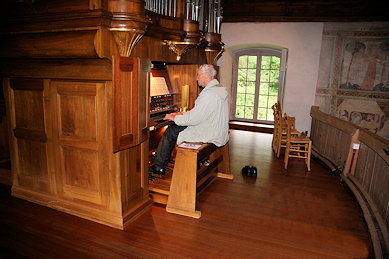 But we were in for a special treat as Herr Hofer mounted the staircase leading to the organ and proceeded to play a number of different pieces for us. Not only is he a fine organist, he had chosen a wide variety of pieces, from classic organ music through to folk tunes.

All too soon for many of us, who could have listened to Herr Hofer all morning, it was time to depart for our next destination. So with the sound of the organ pipes in our ears and smiles on our faces we boarded the coach for a very different, and very tasty, Swiss cultural experience. 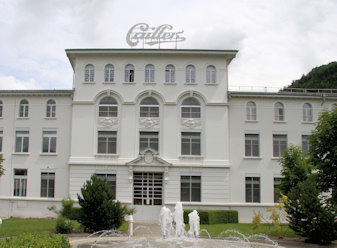 Next stop was the Cailler Swiss Chocolate Factory. Although now part of the Nestlé Group, Cailler still retains it's own recipes and styles. After a short explanation of chocolate making we moved on to the tasting room where a wide selection of different chocolates were available to sample. Delicious! 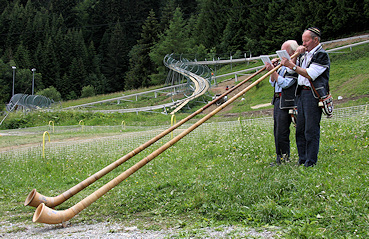 Lunch today was a classic Swiss cheese fondue, but with a difference in that we were serenaded to, and in, our restaurant by two alpine horn players and their flag man.

It is quite common in this region for farmers, in their "spare time" to learn and play the alpine horn and that was the case with our group. The music they played was traditional folk tunes from this region, and whilst very different from the organ recital earlier in the day, was very atmospheric. 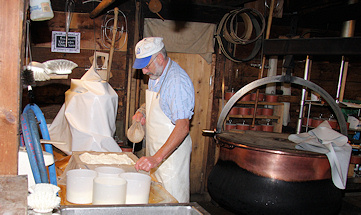 Our restaurant, at Gruyère-Moléson, specialized in Swiss cheese fondues, which was not surprising as they made cheese for this purpose in a room behind the restaurant. After lunch we were ushered through to see just how cheese is made. An interesting demonstration made even more fascinating as amongst our group there was a professional cheese maker. I think she works in somewhat more modern conditions, though she was very envious of the huge copper pan, used for heating the milk.

The alpine horn players serenaded us a final time as we left the restaurant and boarded the coach for the afternoon drive to Montreux, on the side of Lake Geneva. 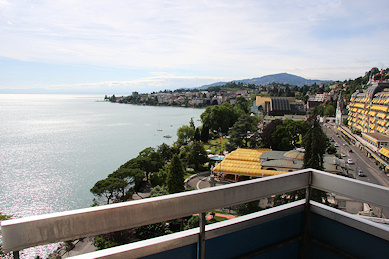 We arrived at our lakeside hotel in time for those that wanted to take a stroll along the very pleasant promenade in the late afternoon sun before returning for lectures by Ton Hannink and Szczepan Marczyński, giving us our "clematis fix" for today. Modesty nearly forbids me from mentioning the following - but not quite! Ton Hannink's talk, titled "Rare and Special Clematis", included some new cultivars that he has recently introduced, or soon will introduce. Fiona was totally taken by surprise and we were both honoured when Ton Hannink announced that two of his new clematis would be registered as C. 'Ken' and C. 'Fiona Woolfenden'. He showed pictures but warned that the plants are currently being "bulked up" and so will not be available for a few months or so.

I leave you with a view over Lake Geneva. Next month I will complete my reports with one garden in France, two Swiss nurseries, three private Swiss gardens, comments on a number of Swiss wines, the sights of Bern and our farewell dinner. If you wish to (re)read my first installment, please click here.