This is the first of my informal reports about the visit by the Society to Yunnan province, China during the first two weeks of June 2012. A comprehensive set of reports by attendees will be published in Clematis International 2013.

The itinerary was organized by Harry Jans, veteran of many a horticultural visit to China, with help from our president, Ton Hannink, and they had made a varied and very interesting programme covering much of Yunnan province. This meant that not only did we see a wide variation in flora, we also encountered a number of the 56 minority ethnic groups, each with their own customs, cuisine and way of life.

I must also mention our Chinese agent, Carolyn Gao, who was responsible for the logistics of the complete event. Whilst we were accompanied by a local guide in each of the different regions that we visited, Carolyn was with us for the whole of the trip. She had organized the logistics of our visit, including hotels, transport, restaurants, lunch packs, admission and tickets, in fact every aspect of our stay in China. Her professionalism was unparalleled, she was always "on call", ensuring that everything ran smoothly, yet she did this with a friendly and approachable manner. When necessary she rescheduled our itinerary to ensure things ran smoothly, making sure that small problems were not allowed to develop into major issues, anticipating outcomes and adjusting timings, etc., totally transparently to us so that the programme ran like clockwork. 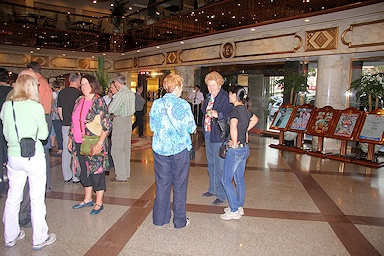 On Monday 4th June, 36 members of the Society met in the Kunming Hotel, Kunming, Yunnan province, China, along with our organizers Harry Jans and his partner Hannie and our Chinese agent, Carolyn Gao. It was the start of what I'm sure will be one of the most memorable meetings of the Society. 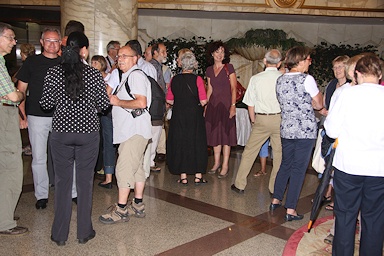 Our two weeks in China would take us from Kunming, capital of Yunnan province, to Dali, Lijiang and Shangri-La (previously known as Zhongdian) before returning to Kunming. We would visit towns, villages, markets, temples, hear traditional folk music, get out and about in the countryside, reach an altitude 4460 metres - and see clematis in the wild.

The group was a mix of first time China visitors and other who had visited previously. As we ate our first Chinese dinner and listened firstly to Harry, then to Carolyn as they explained the itinerary for the next day, we were all excited at the prospects for our two week travels. 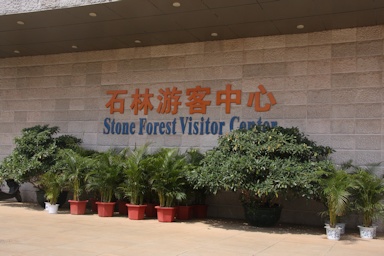 Our first complete day and we travelled south of Kunming to an area called the Stone Forest, a large area designated a Unesco World Heritage site due to the limestone formations, many looking like petrified trees.

The Stone Forest is the location for the legend of Ashima, a beautiful Yi woman. When she was forbidden to marry her true love, she came to the forest and was turned to stone. 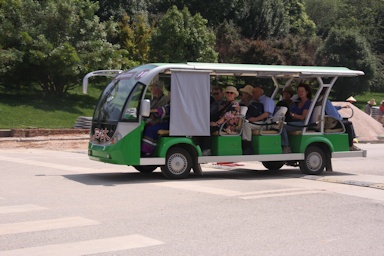 To enter the area you have to park in the outer car park and take one of the free electric shuttle buses. We were to discover many more electric vehicles in China. 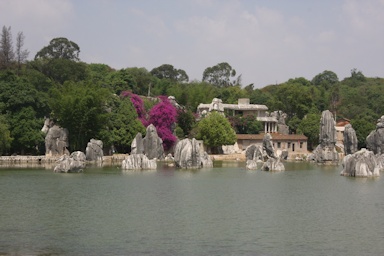 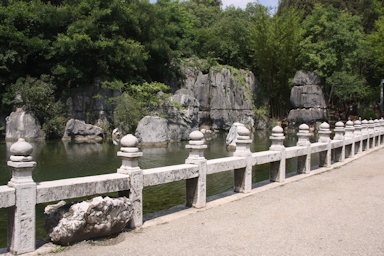 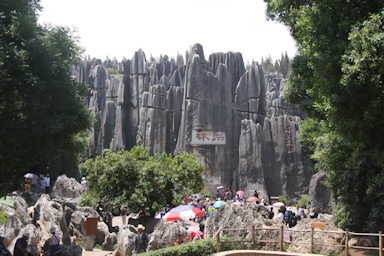 The Stone Forest is a very large area with many paths criss-crossing through it. To avoid getting lost - apparently quite an easy thing to do - our local guide led the way between the rock formations. Initially we seemed to have the place to ourselves, but, as the morning progressed, we came across more and more other tourists. It was interesting to note how certain places were extremely popular, especially as a backdrop for photos.

Many of the rock formations have been given names of things that they resemble, though sometimes the similarity was quite difficult to see. 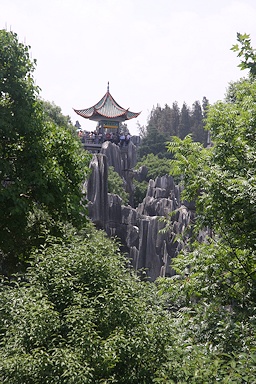 Local knowledge certainly paid off. There are two view points within Stone Forest, both pagoda shaped shelters on the two highest peaks. One was very popular and, from what I could see, always crowded, whereas we had the other one all to ourselves. 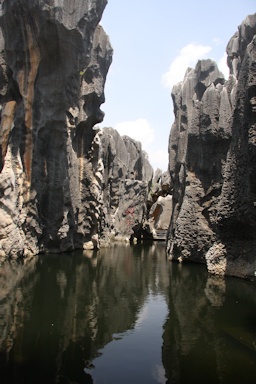 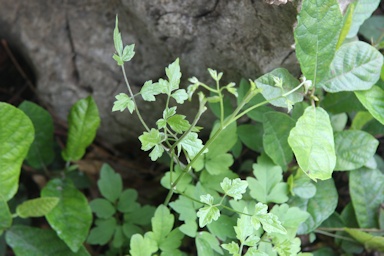 Finally I show you our first encounter with a Chinese clematis. Crouching at the base of a rock we found a number of plants such as the one on your right. It was suspected that it is the Chinese equivalent to C. vitalba, so even if there had been flowers they would have been somewhat insignificant. 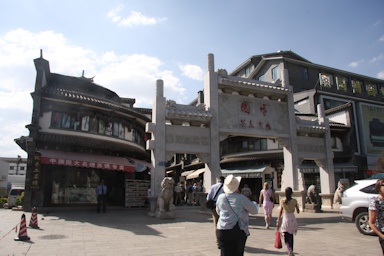 After a late - but excellent - lunch we headed back to Kunming and the Bird and Flower Market. This was rescheduled now so that we could visit the Kunming Botanic Gardens on our return to Kunming at the end of the two weeks. 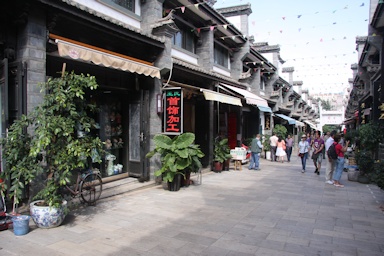 We had about one hour in the market, which was probably enough at the end of a long and hot day. Even so it was very interesting and quite big, being on three levels and with sections for flowers and shrubs, dogs and cats, birds, fish along with other small shops. 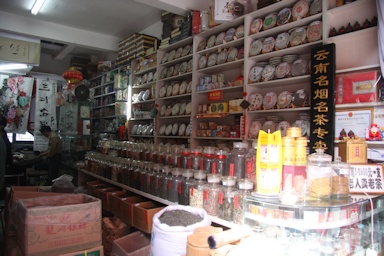 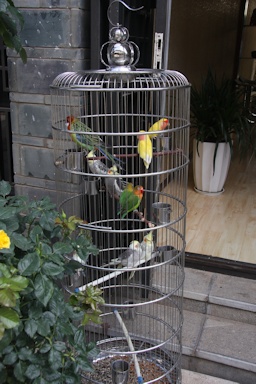 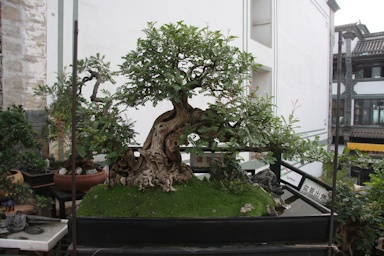 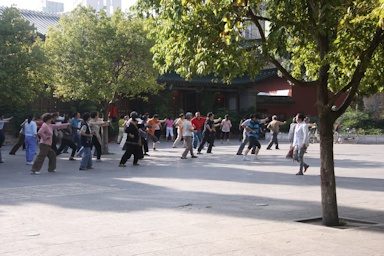 The original early morning flight to Dali had been cancelled and so Carolyn had rebooked us on the next one, which was late morning. 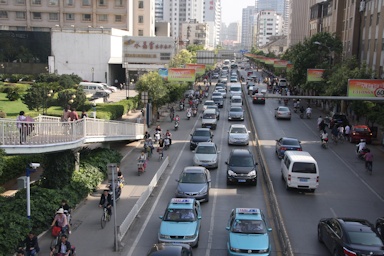 This gave some of us a chance of a little lie-in, alternately others took a walk on the streets of Kunming to see the early Tai Chi classes in action, and to marvel at the traffic. 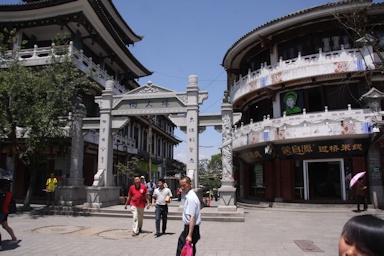 After a short and uneventful flight of less than one hour, we were met by our coach and local guides and driven into the centre of Dali for lunch. Whereas Kunming is most definitely a city, Dali was a large rural town. The street down the centre of the town was supposedly traffic free, though this didn't stop the steady stream of electric scooters, which have a tendancy to come up silently behind you. Fortunately most hoot as they overtake you, but by no means all of them do this. And you also get the occasional small Chinese multipurpose truck, carrying cement, bricks, timber or suppliers for one or more shops. 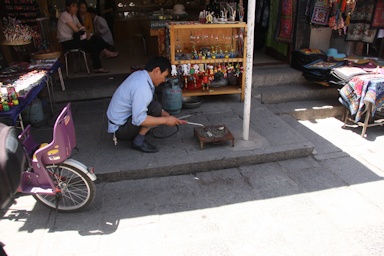 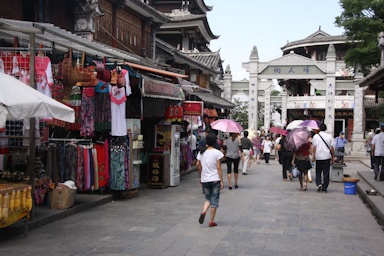 The main street, and many of the side streets, are lined with shops and restaurants, mostly traditionally styled buildings. To me it had a very friendly feel and, although it was always busy, it never seemed to too crowded. What was surprising, though, was the amount of road repairs and other works that started in the early evening and went on until after we'd gone back to our hotel. 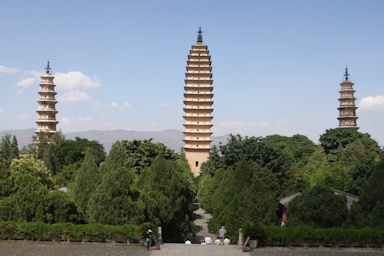 But I get ahead of myself. After lunch we went back to the coach and travelled the short journey to the Three Pagodas and Temple complex. This famous site has a relatively small frontage but it makes up for this by stretching back towards the distant hills. The Three Pagodas are towards the front of the site and are very eye-catching, though not as tall when you get close as you might first imagine. There are then a series of steps and terraces, each with a temple, beyond which lies more steps, terraces and temples.

It was a hot day and, mindful of the time we had to be back at the coach and the distance to retrace our footsteps, we didn't quite manage to reach the very last one, though we could see it.

I leave you with a group photo, taken on the steps of the Three Pagodas and Temple entrance gate. 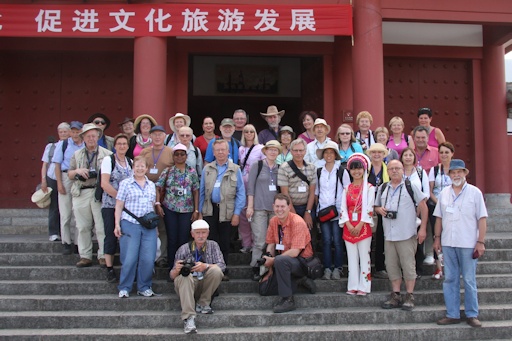