This is the second of my informal reports about the visit by the Society to Yunnan province, China during the first two weeks of June 2012. A comprehensive set of reports by attendees will be published in Clematis International 2013. 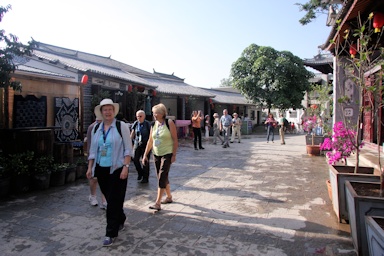 The day started with a half hour drive out of Dali to the Bai (the local ethnic minority) village of Xizhou, to visit the market. But before that, we had a stroll through what appeared to be a walled town, heading for a "tea ceremony". 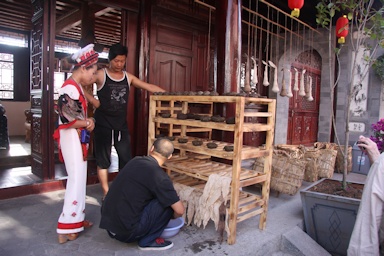 We passed someone making Pu-erh tea, dried cakes of compressed tea which, so I understand, has undergone a fermentation process. It is a speciality, mainly produced in Yunnan, and makes a very dark tea. 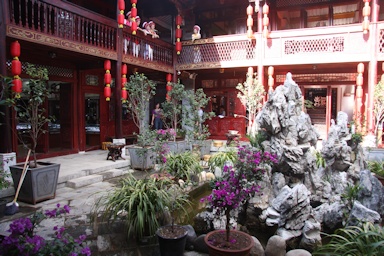 We were directed into a courtyard where we wandered around for a short time prior to the "tea show". There were demonstrations of embroidery and an old Chinese stringed instrument. 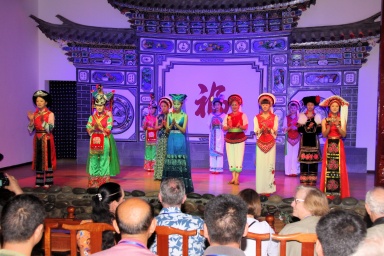 The show was a curious mix of Chinese folk song and dance, with actors in a variety of different brightly coloured ethnic costumes. I believe they were enacting a folk legend, but the exact storyline was a bit of a mystery. In between the numbers, three different teas were served to the audience, including a delicate green tea and a sweet tea. The show culminated in a grand finale with the "bride and groom" being carried around the room. Although a little touristy (but there again we were tourists!) it was done with great enthusiasm and energy and the dancers looked to be enjoying themselves. 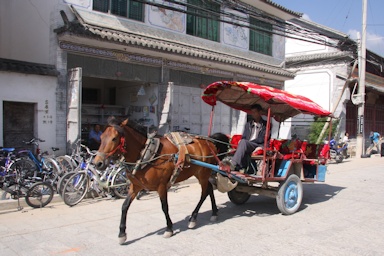 From the village it was a short walk to the market. Transport was available, but we declined!

The market was fascinating, a wonderful eclectic mix of old and modern, every cooking utensil you can imagine and more, lots of fresh spices, some very fresh looking vegetables and fruit, and lots more. It was quite amusing to see a group of middle-aged woman in traditional costumes standing around a demonstration of a modern electric grill machine, and even more so when one of the woman bought it. 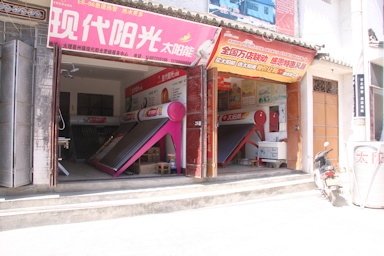 Solar water heating appeared very popular, both in cities, towns and even small villages. Carolyn told us that the Chinese government provided them at a subsidized price to many villages. But I was very amused to see them for sale in "shocking pink". 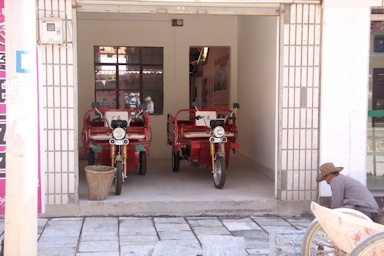 You could also buy a brand new motorized tricycle, though the main mode of transport, certainly within towns, seemed to be the electric scooter. They could be a bit disconcerting since they are absolutely silent and had a tendency to come up behind you and then overtake, irrespective of how narrow the street might be. But they are pollution-free, unlike some of the vehicles we saw! 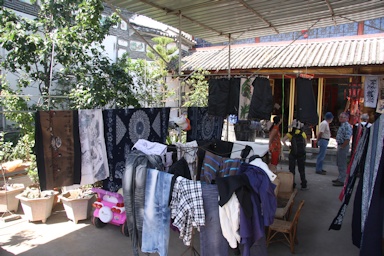 From the market we drove on to Zhoucheng to visit a small family-run tie-dye workshop. This area is famous for hand-made tie-dyed cloth. The classic dye colour is blue, though others are now being produced.

Designs are incredibly intricate, two which stood out for me were fish and butterflies. To see the plain cloth being tied prior to dying is very impressive.

The pattern is lightly marked on the cloth before tying starts, but even so, it was quite baffling to see quite how the cloth can be so precisely tied to make the final patterns.

A number of our group came away with various table cloths and other items. 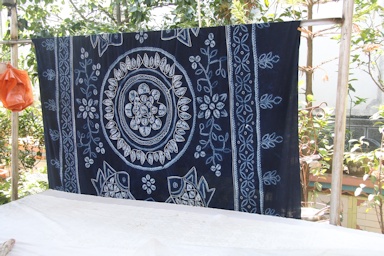 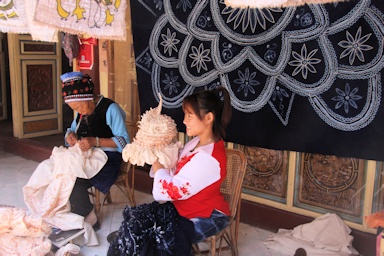 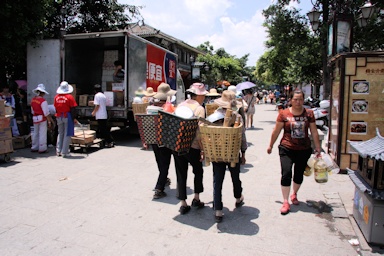 Whilst some of the group opted for a mountain cable car ride, the rest of us enjoyed a sunny, although quite hot, afternoon exploring Dali town. 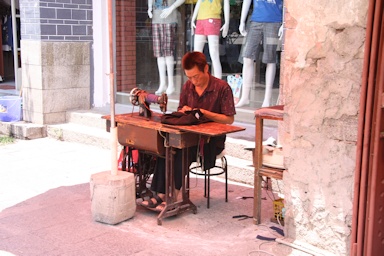 The main street that runs north to south is pedestrians only - apart from bicycles, electric scooters, motor bikes and the occasional van and lorry! Quite wide and lined with small shops, it had a very pleasant and friendly atmosphere, and even of an evening it never seemed to get too crowded. 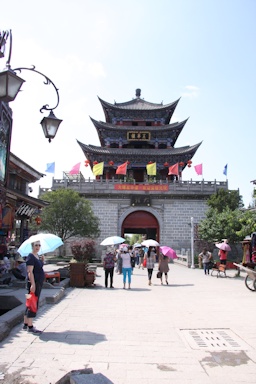 At both ends of the main high street are large and imposing Chinese gates. From the South Gate you could walk a short distance along part of the town wall, a wide and imposing structure that would have made a formidable defence. 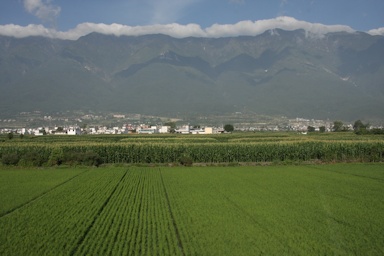 We had always said that visiting China one had to take a flexible approach to the itinerary and this was very true of this day. All started well as we left our hotel in Dali for what should have been a few hours drive to Lijiang. 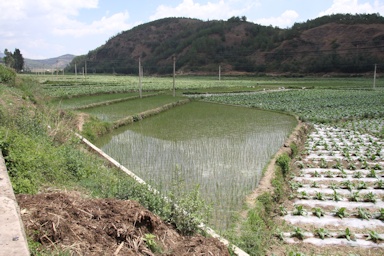 We drove past rice and tobacco crops, stopping a few times for photographs. this was rural China, with work in the fields being done, as far as one could see, primarily by hand. 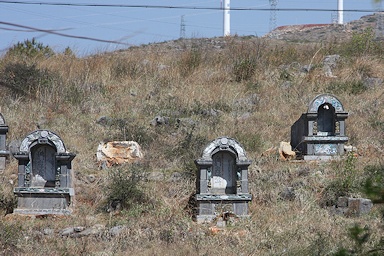 We noticed a large number of stone monuments in some areas. Our guide said they were graves, some were closed and used, others were yet to be occupied. 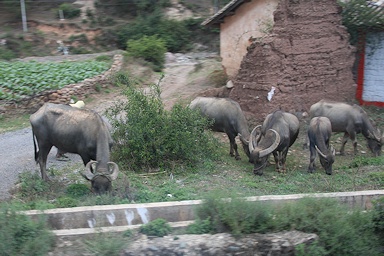 It was also a novelty for us to spot these oxen being grazed, but for their owner this was his livelihood.

And then we hit a problem. Unfortunately there had been a very serious accident a few miles further along our road in the village of He Qing and we came to a standstill in a queue of traffic. I believe that villagers were upset by the tragic accident and what they saw as the refusal of the authorities to heed previous requests to make the road safer.

In all we were delayed for some 6 hours. However the resourceful Carolyn managed to turn what could have been a long, hot and very boring wait into quite an adventure. Firstly we backtracked a mile or so to what was, I believe, a large amusement park for children where she managed to persuade the staff to re-open their restaurant and do us lunch.

Then she walked us down the road to a local silk factory. They were training students to work there over the summer but were quite happy to let us wander around and to demonstrate to us how to spin the silk strands from the silk moth cocoons into very fine silk thread. 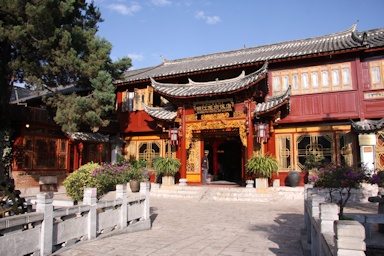 We finally reached Lijiang early evening, just in time to book into our hotel - a stylish building in the centre of the pedestrian precinct - and then go out for dinner. So what could have been a completely wasted day had ended up as an added bonus.

Our first day of botanizing started slightly overcast as we headed north to the Gang Ho Ba National Park. We were checked by security at the entrance and then motored on for a few miles before stopping by the side of the road. Within a few minutes of getting off the bus, we were strung out across the hillside seeking out botanic beauties. 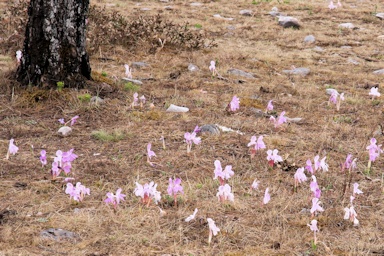 There were certainly some very nice plants, though what each one was is beyond me. If you are interested, then visit www.jansalpines.com. Although (as of end July 2012) he has not yet posted photos from our trip, he has visited this area before and has examples from previous years. 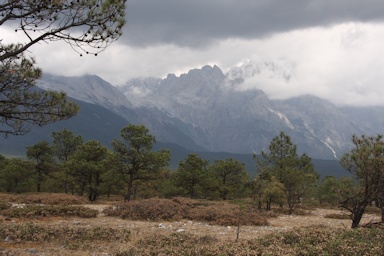 Unfortunately the Clematis chrysocoma that Harry had seen in the area on his previous visit was not to be found. Yunnan Province was in it's third year of drought so perhaps this has become a victim to the climate. However even with dried and parched earth, the scenery in Gang Ho Ba is very beautiful, especially with the backdrop of the mountains. 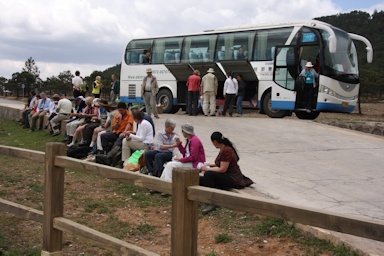 Lunch was a roadside picnic, but guaranteed to appeal to us all since Carolyn and our local guide had worked hard yesterday evening and this morning, buying and preparing various different foods so that before we set off this morning, we all could make our own, personalized, lunch selection.

After lunch we continued up the pass to the Visitor Centre where we transferred to smaller "green" visitor buses to take us you the rest of the way to Bai Shui. 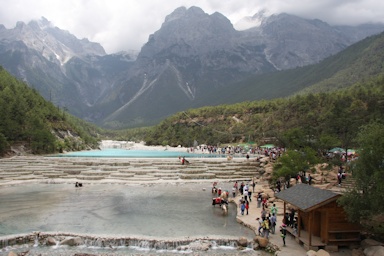 Bai Shui comprises two lakes with the top one containing natural terracing, formed as minerals from up-stream have been deposited in layers. A couple of our group had visited a few years ago and were amazed how built-up Bai Shui now was. There were certainly a lot of visitors by the lakes, though this was possibly because it was a Saturday. 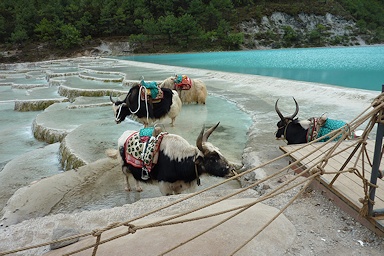 Three or four yaks were standing in the shallows (except the one who had strayed into the centre!) and visitors could have their picture taken either beside or on them. 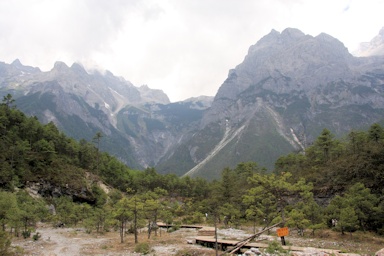 The area has a number of well signed footpaths and we struck out along the side of the river to see what we could find. There was a lot of work being carried out along the river bank and a boardwalk path was taking shape. Harry said that in past visits he'd come across many different plants but, possibly due to the combination of drought and building works, we were not so lucky this time.

However we did come across a yet-to-be-identified clematis. And the scenery was quite breath-taking. 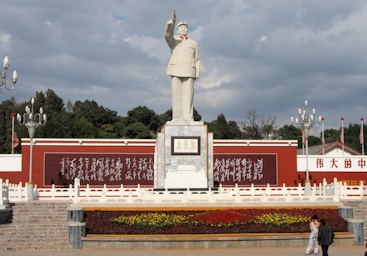 Our return to Lijiang took us past this imposing statue of Chairman Mao Ze Dong. We had a little more time than the previous evening to refresh ourselves before heading off for dinner through the streets of Lijiang to a restaurant a short coach journey drive from our hotel.