For my second of my personal reminiscences of this years 10th celebration of the Swedish Clematis Society I'll focus on the optional excursion to Estonia. The first report was on Sweden and the final report is a round up of the event.

For some of us this was a return to a country and friends we'd first met in 1992, barely one year after their liberation from Soviet rule. It was great to be in this friendly country again, in spite of the visit being overshadowed by the recent and most untimely death of one of Estonia's most famous clematis breeders, Uno Kivistik.

Some 90 International Clematis Society and Swedish Clematis Society members boarded the Esti Line ferry for Tallinn. After an excellent dinner, very sociable evening and smooth overnight voyage we berthed in Tallinn and were greeted by Külvi and Meeli Kaus and other members of the Estonian Clematis Society. 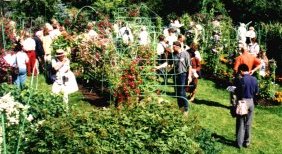 No time to loose, it was on to the two coaches and off to Roogoja and the Kivistik's farm and nursery. After a warm welcome from all the family, at least four generations, we walked across the fields to the nursery and exhibition grounds. 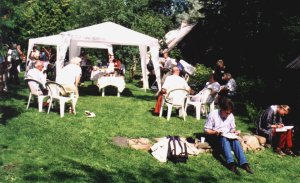 Confronted with row upon row of clematis you start to realize the contribution Uno Kivistik made to clematis breeding, and which his widow and family are determined to continue. 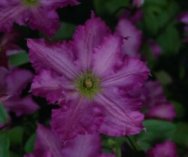 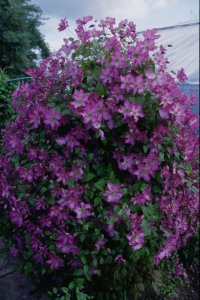 Everyone has their own favorite, the one that caught my eye this visit was C. Tentel. Very free flowering, a delicate pink with crenelated edges, it has a delicacy and lightness to grace any garden. 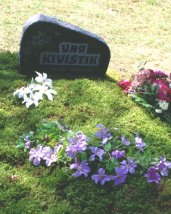 We could have spent the whole day wandering around the Kivistik's nursery but with so much to see and only two days, it was soon midday time to go. A very moving stop at the grave of Uno Kivistik to lay flowers, say a few words and offer silent prayers. A fitting and permanent tribute, the engraving on Uno's headstone is C. Piilu, yet another of his introductions. 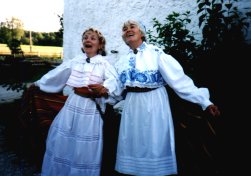 That evening we were given a special treat, dinner at an old inn near Rapla. To accompany our meal we were entertained by an Estonian quartet playing traditional Estonian music on traditional Estonian instruments. And to honour our visit, Külvi Kaus, secretary of the Estonian Clematis Club, and her sister-in-law dressed in national costume, made even more interesting due to the regional variation. The main reason for the music became apparent later in the evening when Taavi and Aime Kivistik led the dancing. Many of us joined in but no one could match their prowess on the dance floor. 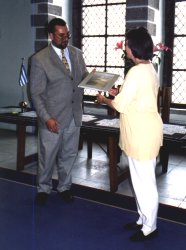 I'll finish this month's article with a few views of Tallinn, the capital city of Estonia. On the second evening we attended the city hall where Toomas Sepp, the City Secretary, welcomed us all to Tallinn and presented the International Clematis Society with a book about his city. 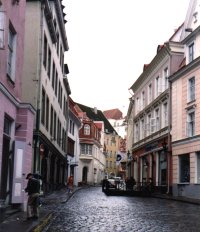 We were also taken for a guided tour of this ancient building by Oksana Ovchinnik, the Town Hall Hostess, who pointed out the many interesting aspects of the Town Hall and it's content, including some interesting insights into the balance of power between men and women in days gone by! Tallinn centre is a maze of narrow streets, very old houses and shops, and the city has been working very hard to restore and renovate these wonderful buildings. Those of us fortunate to have visited Tallinn on the 1992 International Clematis Society visit were very impressed how much has been achieved. 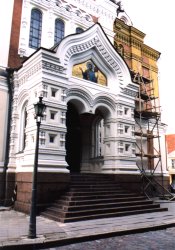 Alexandr Nevsky Cathedral is a good example, with much done already though the work still goes on. It's a 19th century Russian Orthodox building dominating Lossi square, very ornate and grand if a little out of place amongst the older buildings that surround it.

Our walking tour of the city was only slightly marred by the weather, which had changed quite dramatically from the warmth and sun of yesterday at the Kivistik's or this morning at three private gardens near Tallinn (perhaps more of these next month). However we were not quite so lucky the oldest school in Tallinn, which was securely encased in it's restoration cloak. Guess we'll have to come back again! And finally, one of my favourite places in Tallinn, the Maiasmokk Kohvik, one of the best coffee houses in Tallinn during the 1920's and 30's. The interior looks as if it hasn't changed from those days, and the cakes are reputedly the finest in Tallinn. But the only way to decide is to go there and try some for yourself. 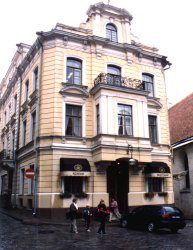 Click here for the third and final report. The first report was on Sweden.