This is the first of three reports of some of my personal memories of the trip and I will try to cover all aspects of our activities, though not in great detail. (Click here for report 2, mainly on Estonia and report 3.). 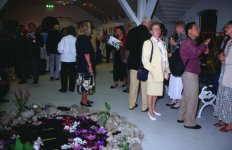 In this article I'll concentrate on the 10th anniversary celebrations of the Swedish Clematis Society.

These were held at Hågelbyparken, a large park and conference centre with small specimen farm, youth hostel, formal gardens and restaurant. It's located a little way outside Stockholm, but only a short journey in our minibuses from the two hotels we're used. 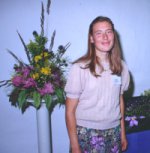 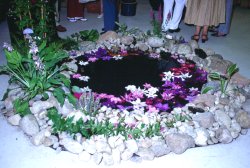 As part of their celebrations, the Swedish Clematis Society had arranged an impressive exhibition of clematis plants and related objects, and we were invited to a special evening opening, to be followed by dinner. Of the many displays, two which stood out were the flower arrangements of Ms Ilga Irbe from Latvia and a clematis water feature. 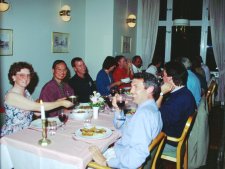 After looking round the exhibition we walked the short distance to the Hågelbyparken restaurant. Having been greeted by the staff, we took our seats and the park director gave a short speech welcoming us to his park and telling us some of its history. 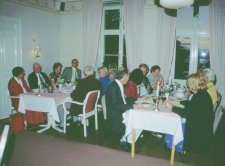 Then we got down to the serious business of eating! All credit must go to the staff, who served over 100 guests very efficiently and still kept a smile on their faces. It was a very good evening with everyone enjoying themselves. 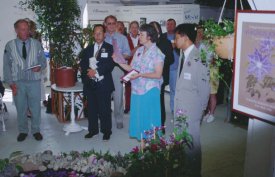 The following day we returned to Hågelbyparken for the official opening of the event. Following words of welcome from Werner Stasny, the Swedish Clematis Society chair, a spokesperson for each of the societies present delivered their congratulations in return. We then listened to a very interesting morning of lectures given by members of our group.

Many thanks to all the speakers, they'd obviously taken a lot of time and trouble preparing their talks. Articles on them all should appear in the 1999 issue of 'Clematis International' journal. And we'll leave Hågelbyparken with a glimpse of C. Hågelby white, growing in profusion along the front wall of the park. 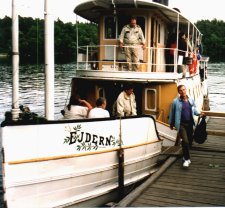 Interesting though they were, it was nice when the time came to take to the minibuses for the short drive to Lake the quay side to board the steamboat Ejdern for a cruise on lake Mälaren to the Royal Castle of Drottningholm. 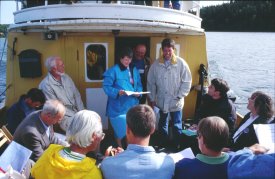 The S/s Ejdern was built in 1880 and is the oldest working steamboat in Sweden. She has been lovingly restored by volunteers who run her for excursions and charter traffic from Södertälje. S/s Ejdern is noted in the Guinness Book of Records as the World's oldest propeller driven steamer with original machinery. It wasn't pleasure for everyone, though, as your hard working council officers took the opportunity to hold their Council Meeting in the prow of the boat, much to the amusement of one or two on-lookers. 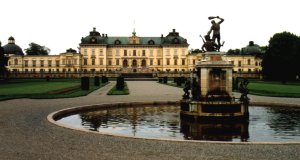 We were given an hour or so to look around Drottningholm Castle grounds before boarding the S/s Ejdern again for the return trip. They are laid out fairly formally with a number of spectacular fountains and other water features. 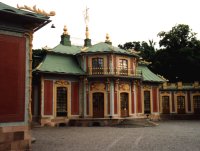 But there are also little 'finds' tucked away in the corners waiting to surprise the more adventurous visitor, such as the oriental village. The sun was just starting to set as we disembarked, a short walk away from on of our hotels and the minibuses. The second report features Estonia and a few selected highlights. I'll leave you as we left Sweden, on the ferry.

All information contained at this site is personal to Ken Woolfenden and does not represent the official view of the International Clematis Society.
@K.Woolfenden