This personal report on the visit by the Society to Finland and Estonia in July/August 2005, covers Day Two of Part 2 - Estonia. You can follow the following links to go forward to Day Three or back to Day One, or return to Part 1 - Finland, Day One, Day Two or Day Three. 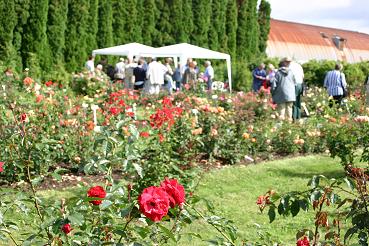 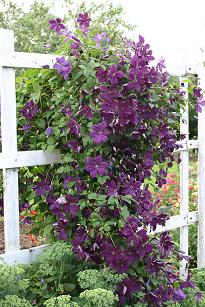 Day Two started bright and sunny as we drove out to Põltsamaa and Oü Joosti Aiand, the Rose Gardens of Küllike and Rein Joost. In the many beds stretching out across the trials area there were hundreds, if not thousands, of roses, from all over the world, being tested for suitability to the Estonian climate.

Küllike and Rein Joost have been interested in roses for over 30 years, but the nursery was established only 10 years ago. They have built up a market not only for rose plants but also for cut flowers, as well as undertaking landscaping projects, with a rose theme obviously.

But it was not just the roses that attracted some us. Slightly hidden behind a trellis was this fine example of C. 'Negritianka'.

There was plenty to occupy us for the whole of the morning at Oü Joosti Aiand, before moving on to Imavere Kõrts and lunch. This converted stable block in the heart of the Estonian countryside seemed the most unlikely place to cater for some 70 people, but as we walked through the large wooden doors it became apparent that they were no strangers to large groups. Long trestle tables were already laid out for us at one end of the huge hall. Suitably refreshed, we wandered around a little, some going outside to look at some of the other buildings and the lake (this was obviously a large and important estate at some time in the past) whilst others went upstairs to the craft shop. Hand knitted jumpers seemed the most popular of the goods on display and a number of people got back on board the coaches clutching large, but obviously lightweight, bags.

The afternoon was devoted to a visit to Roogoja Farm, the home of the family Kivistik. For those of us who had visited before, we were looking forward to a return to see the changes that Taavi and Aime had made since they took over, after the sad death of Uno Kivistik in June 1998. And for those for whom this was their first visit, they were eager to see the place from where so many fine Estonian clematis had been bred. 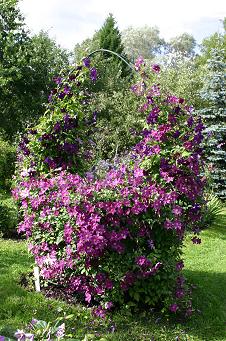 But we were in for a surprise. As we filed into the garden by the side of the house, we heard the sound of music. Spread out on the grass were chairs and tables, all facing to where the musical folk group, "Pillipiigad", were arranged. This local group is famous throughout Estonia, and beyond. The multi talented group played various instruments and sang a variety of Estonian folk songs for our delight. 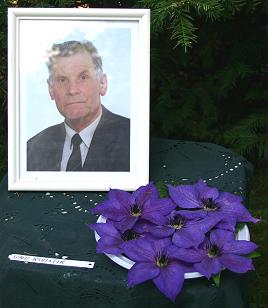 It was not just that they were very talented, all with excellent voices as well as being proficient on their instruments, they really put their hearts and souls into the music and this joyful atmosphere infected us all. It was a lovely start to what was going to be a magnificent afternoon.

I say magnificent because, when the music had finished and we made our way to the growing beds and display gardens, we were confronted with a superb array of clematis, the vast majority just about at the peak of their flowering. It is obvious that Taavi and Aime are continuing the good work started by Uno, as there were quite a number of new cultivars in amongst some of their better known ones. A selection of new cultivars had also been arranged for us in an area by the side of the house, including the new C. 'Uno Kivistik', displayed by a portrait of the man.

Time went all too quickly as we wandered around the display garden, the trial beds, the polytunnels and other displays arranged especially for our visit, interspersed with stops for refreshments, including delicious home made cakes and biscuits. Roogoja Farm is still a family business - Taavi and Aime are the main contacts now but the rest of the family is still heavily involved with promotion, breeding and selection of new varieties. The whole family lives in and around the area and all had been drafted to help this afternoon. So I leave you with a picture of the Kivistik family, with Aili Kivistik, wife of the late Uno, in the middle with her children, their partners and in turn their children.

We thank the whole of the Kivistik family for their very warm welcome and hospitality on this most memorable afternoon.

Please follow these links to go forward to Day Three or back to Day One, or return to Part 1 - Finland, Day One, Day Two or Day Three