This personal report on the visit by the Society to Finland and Estonia in July/August 2005, covers Day Three of Part 2 - Estonia. You can follow the following links to go back to Day One or Day Two, or return to Part 1 - Finland, Day One, Day Two or Day Three. 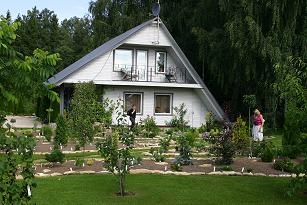 Over the last couple of days, the risk of the weather breaking had been increasing, but this, our third and last day of visits in Estonia, started bright and sunny as had the others. We boarded the coaches for the last time and headed off for the conifer and shrub nursery, Nurga puukool. 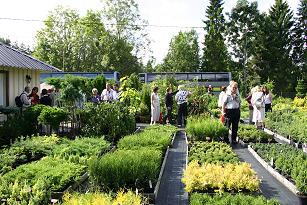 This nursery was only started some 5 years ago and they were currently developing a new display area for miniature conifers. With over 600 different species and cultivars, there were plenty to choose from and I'm sure there were many of our group who wished they were able to take one or two home with them. But carrying trees on aeroplanes is a bit more difficult than taking bare-rooted clematis! 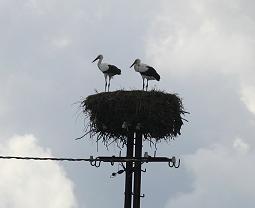 Lunch today was at the Saku Beer Factory. Saku is the premier brewery in Estonia, and we made sure we sampled some of their wares with our meal. On route, we spotted a fine pair of storks, nesting on top of a telegraph pole. Storks are quite common in Estonia, but not necessarily liked by everyone. Their nests are heavy and quite often disrupt telecommunications, to the extent that, recently, the Estonian telephone industry have tried erecting "dummy" telegraph posts, to lure the storks away from the real ones. 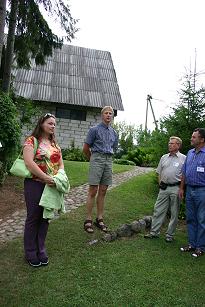 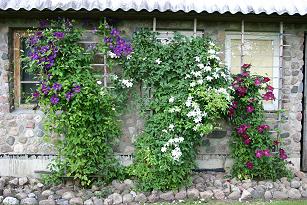 Our visit for the afternoon was to the garden of Ahto Ruut, at Kivi-Lillemäe Farm. Ahto started this garden over 10 years ago, building a landscape over time of various different types to provide suitable habitats for the various different genus that are his passions. There was a large and very fine alpine collection in a large rockery area, and garden areas for roses, hostas, lilies and, of course, clematis. As well as extensive landscaping of the garden, some still under construction, there had also been much renovation of the house and stone out-buildings. 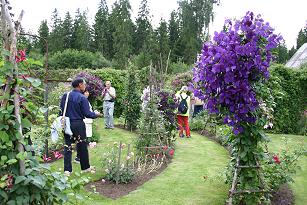 In particular, the concentric rings of roses and clematis, some on trellis, some on wooden pyramids, some on simple stakes, was most impressive, albeit very difficult to do justice to in a photograph. 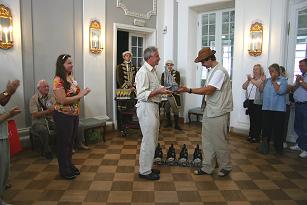 Our final visit of the Estonian programme took us back to Tallinn and the Kadrioru palace,the residence of the Estonian President. Built in Italianate style, it is said to be one of the best preserved examples of Baroque architecture in northern Europe. We were given a short guided tour of the main public rooms in the palace, and they certainly were very impressive. Should you come to Tallinn again, this would be worth a revisit. 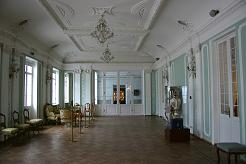 After the tour, we assembled in the main hall for champagne and a finger buffet, served by finely dressed staff, before Taavi and Aime made their final awards. Throughout the few days we'd had in Estonia, at each of the gardens we visited, we'd thanked the owners with a gift of a garden candle holder, inscribed underneath "International Clematis Society 2005". Now they distributed the final ones, to various people who had helped in the planning and organization of the event, to our President, Szczepan Marczynski, and even myself! And of Taavi and Aime - the Society had a little present for them, to thank them for organizing and running such a success event. They even managed to give us good weather - but only just. As we left Kadriorg Palace, it was starting to rain a little.

In fact we were extremely lucky with the weather. The week following our return home, Helsinki experienced terrible rain as it attempted to stage the International Athletics Championship. Seeing the running track completely awash, it was difficult to image that, just a few days before we'd been strolling around in T-shirts and sunglasses! 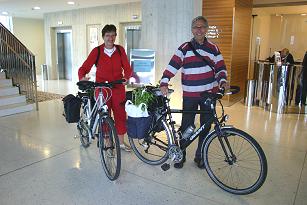 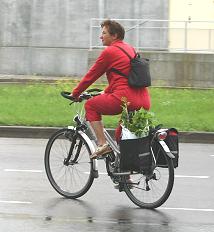 We did have a little rain, but only on our departure day, as we all left Estonia in different ways to different destinations. A small group caught an early bus to Latvia to continue their visit. Those flying home from Helsinki boarded the coach to the ferry port, unlike those of us flying home from Tallinn, who only had to go next door to the airport. And that just left two, Ton Hannink and Marie van Hulten, who had driven to Helsinki and then come over to Estonia on bicycles. With saddlebags bulging with clematis, they set off from the hotel to much applause!

Please follow these links to go back to Day One or Day Two, or return to Part 1 - Finland, Day One, Day Two or Day Three