The Society met for a few days in Guernsey during April 1999. On my previous visit to Guernsey, a couple of years previously with the British Clematis Society, the weather had been rain and more rain. This time I am pleased to report the weather was dry and it changed my view of the Channel Islands. This is the first of two reports on the long weekend we spent there (click here for the second report).

On our first morning, Friday, we went for a walk in the bluebell woods on the south east of the island. Our intrepid party led by Raymond Evison, made its way along the coast path. 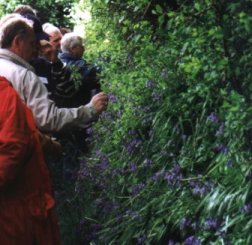 Despite being relatively late in the season the bluebells were still spectacular. The blue of the flowers was fantastic, there were huge drifts of the flowers everywhere interspersed with white flowering wild garlic.

Unfortunately, like Clematis, the blue in bluebells does not show up well on photographs but we admired them when we were there. 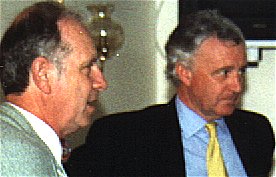 The main reason for the Society visiting Guernsey was to go to Raymond Evison's Guernsey Clematis Nursery. This is the largest wholesale clematis nursery in the world.

On Friday evening Raymond gave a lecture which included some of the history of this nursery and production statistics. Currently, Raymond is producing and selling around 4 million Clematis plants a year, but is planning to expand over the next few years.

On Saturday we were welcomed by Raymond at the Nursery. We were shown the Clematis used in his breeding program where the Clematis are pollinated explicitly to ensure that favorable crosses are made to produce, for example, short plants flowering for a long time which are suitable for containers. 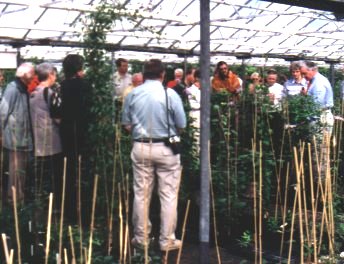 The resultant Clematis are then grown for a number of years to see whether the flower is a potential star. After many stages of selection, cuttings are taken from those that are left and at least four plants are grown for several years to ensure a consistent flowering plant.

Here you can see Raymond explaining about the program to us amongst the Clematis in one of the greenhouses.

One lovely clematis was due to be rejected because it only flowered a the top of the stem, another because it did not flower profusely and a third as it bleached unbecomingly in the sun. To see the number of rejects made us appreciate the effort that went into the introduction of a new Clematis. Interestingly, Raymond also checks out Clematis from other breeders in the same way before he will commit to bulking up plants to sell. 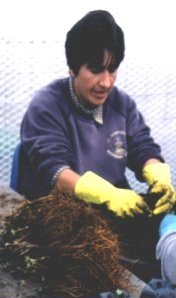 Finally, Guernsey Clematis Nursery exports plants to all over the world. While we were there a batch was being prepared to go to Maurice Horn at Joy Creek Nursery in Scappoose, Oregon, USA. We were all interested as many of us know Maurice who regularly attends our meetings in Europe.

Plants exported to the USA have to be bare rooted for quarantine reasons. The lady in the photo is carefully taking the soil off the roots prior to the plants being inspected and certified before being sent to the USA.

If you bought a plant in late 1999 from Joy Creek Nursery, it may have been one of these!

Follow this link for the second report on the visit to Guernsey.