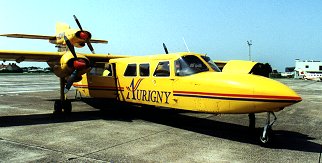 This, the second of our reports our reports on the Society's visit to Guernsey in April 1999, looks at a variety of the activities and visits. It may have been a short visit, but we managed to do a lot of things whilst we were together. (Click here for the first report).

For many of us it all started with a most interesting flight from Jersey to Guernsey, courtesy of Aurigny Airlines.

Their three-engined planes have been flying this route for many years, and as we hit the turbulence over the coast of Guernsey we were very glad we had an experienced pilot. I'm sure his "well, we made it this time" as we landed was a joke, but I was still relieved when I was back on "terra firma" again. 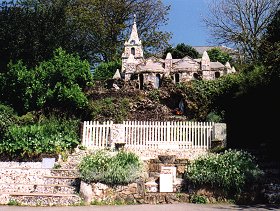 One of the more unusual sights on Guernsey is The Little Chapel, a miniature church clad in broken seashells, pottery and china. It was started in 1923 by one of the brothers of a local religious order. 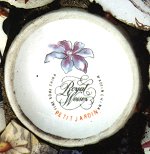 However the interesting outside of this small church doesn't prepare you for the stunning effect inside. And I can't leave this topic without showing you a fragment of china spotted by one of our more observant members, depicting a clematis. So clematis really do get everywhere, don't they? 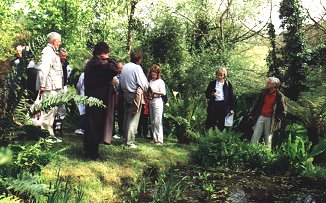 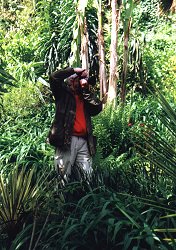 The climate on Guernsey is very mild and allows a wide variety of planting in the many gardens across the island. A prime example can be seen at Mille Fleur, owned and tended by Jane and David Russell.

We were given a conducted tour by Jane, not only a knowledgeable plants person but also, to the delight of many of our party, fluent in German. But whilst we walked in amongst the trees and shrubs, Squirrel kept a watchful eye on us. 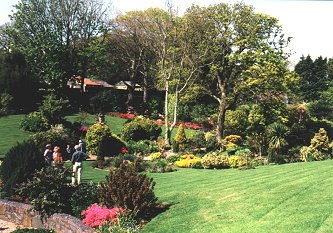 A garden of a very different style was The Hermitage.

Being situated in a hollow, it provides a number of micro climates across the total acreage which means there are some unusual plant combinations virtually side by side. You can see here the striking colours in the dell, in contrast to the magnificent tree, I believe a Monterey pine, which was over 200 years old. 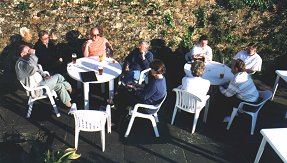 By now you've probably realized that we followed quite a full schedule. With people travelling significant distances from many countries to be here, we wanted to provide value for money, showing as many of the different sides of Guernsey as possible in the short time we had. However there were opportunities for sitting and chatting, and sampling a pint or two of the local beer!

Finally I leave you with the group photo, or at least as many of the group as I could get together at the same time. Some people always seem to wander off! 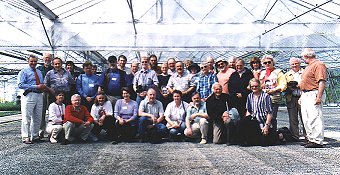 If you want to see a larger version just click this image.
Use the BACK key to resume, or select from the left of the screen.

Follow this link for the first report on the visit to Guernsey.