Clematis of the Month for December 2012 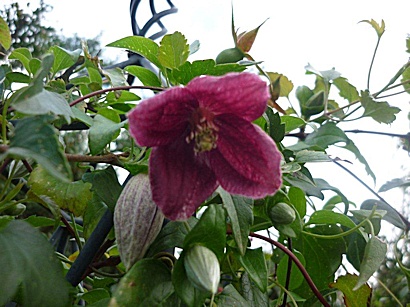 A clematis that I have admired for some time is C. cirrhosa var. purpurascens 'Lansdowne Gem' due to its red colour and its time of flower being December to February, when very little else is in flower. So I was delighted when Iris Clarke, a member of the International Clematis Society, sent me the above picture and wrote to tell me how her plant was growing.

"I planted C. cirrhosa var. purpurascens 'Lansdowne Gem' about April 2012 after it had been left in a corner so-to-speak for a few months. It was bought from a local garden centre during a winter foray; I snapped it up as it is a rarity and not often seen anywhere local to me. I had one about six or seven years ago, which I kept in an unheated greenhouse but it succumbed to an aphid of some sort and curled up and died. 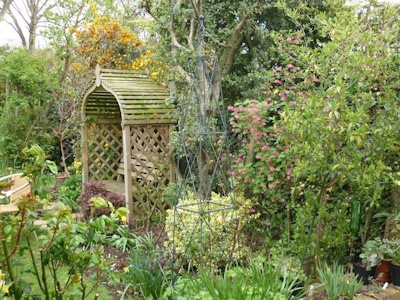 My latest plant of C. cirrhosa var. purpurascens 'Lansdowne Gem' is growing beautifully up a metal obelisk. My plant, which has an all round aspect, gets quite a lot of morning and evening sun which probably helped it to flower early. 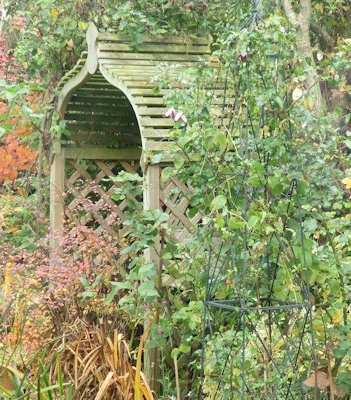 As to its hardiness I have yet to find out, as its still in its first year, but I believe it is hardy in a sheltered position, which this is not. At the moment it is being buffeted by strong wind. It has put on lots of growth so even if it dies back a bit I'm hoping it will re-grow from old wood. after some pruning .It will probably need an eye kept on it regarding pruning, as it will get up to 18ft.if it likes its position.

I love its bright pink single drooping head when it firsts opens then deepening to a beautiful claret red as it ages, and being evergreen the obelisk is always covered in colour. A perfect start to winter. 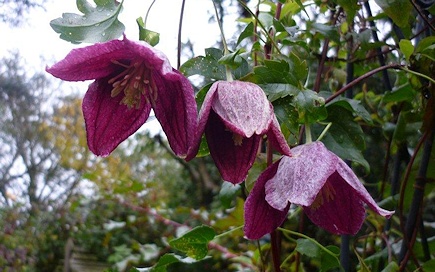 As yet I cannot detect any perfume from it as its in a difficult spot to investigate, but as its a sport from C. cirrhosa var. purpurascens 'Freckles' which is perfumed, I presume it is. Right now there are plenty of buds at different stages of development so I may try and get closer later. For now I will just enjoy the flowers, which I can see from my kitchen window."

C. cirrhosa var. purpurascens 'Lansdowne Gem' originates from New Zealand but there appears to be some confusion as to whom introduced it. Brewster Rogerson refers to it as being discovered in New Zealand by Alistair Keyes but the website, Clematis on the Web says that it "was found in 1995 in New Zealand by M L Jerard, who also named it". (Note to self - need to check the RHS Register to see what it says!)

Looking back through previous Clematis of the Month I see that in December we have often featured C. cirrhosa and its cultivars and you will information on how they grow including the late summer dormancy period which causes the plant to loose its leaves and the stems to look dead but it does revive to flower again in the early winter when there is very little else to look at.

The species C. cirrhosa featured in 1997 by myself and again by Brewster Rogerson in 1998, a white selection from the UK called C. 'Jingle Bells' featured in 1998 and finally, in 1999, Ton Hannink wrote about C. cirrhosa var. purpurascens 'Freckles'.