Clematis of the Month for January 2013 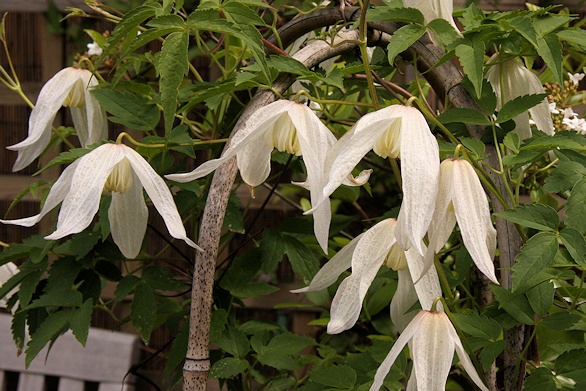 To welcome in the New Year this month we feature Clematis 'Broughton Bride', a white early flowering Clematis which I would expect to see in flower in April or early May in my garden in England.

The flower is always a joy ­ it is very attractive but creates interest by changing as it develops. The buts are creamy but the first flush of flowers are very white, a pure white with red or pink speckles on the outside particularly at the top of the flowers and with long tapering tepals reaching up to 7 to 9 cm or 3 inches or so long. Then there is a later flush of flowers where the flowers are smaller and noticeably creamier in colour and less spectacular. On these the red speckles are more pronounced over the whole of the tepal and you would think that it was a different cultivar. The pictures displayed here are all taken in April and May so show the early whiter flowers. 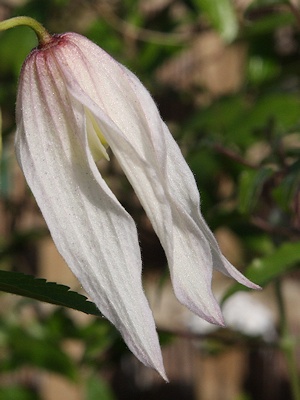 Looking at a close up of the flowers you can see the detail of the speckling on the flowers and the thicker cluster of dots round the point where the tepals meet the flower stalk, making this part of the flower look very pink, even purple. This picture was taken in the second week of April in 2011 shows this very deep colouring.

You can also see the attractive ribbing on the tepal and the way the tepals fold back like wings to give you a glimpse of the inside of the flower. The flowers start by hanging straight down and then they gradually open, the tepals curve back and the flower tilts slightly ­ perhaps to provide access to insects such as bees ­ but giving the appearance of 'lifting' the flowers. 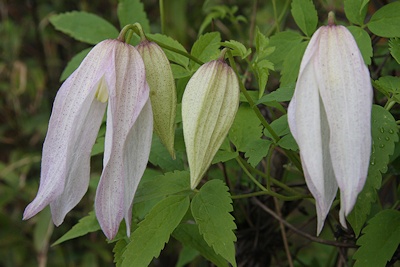 Last year the flowers were later than usual and much more pink than normal. I noted in the third week of April 2012 that C. 'Broughton Bride' was just coming into flower and that the flowers were "quite pink". This photo was taken in April 2012 and you can see that there is much more speckling all over the flowers than in the photo from April 2011 above. The picture shows a bud and two flowers in different stages of development. You can see a bud in the middle which is creamier but will fade to white as it develops (as in the flower on the right) which will develop further and 'lift' and open as in the flower on the left where the tepals are folding back to display the inside of the flower.

The RHS International Clematis Register and Checklist mentions that the flowers can be double as well as single and there are many pictures of double clematis flowers on the internet such as one on the Clematis on the Web site but my plant has not produced double flowers as far as I can remember. 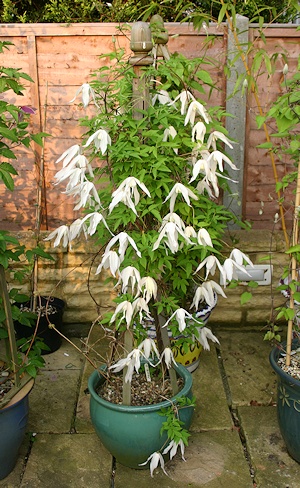 I've had this plant in a pot on my patio for some years, indeed looking at my Gardener's Record Book I see that I have had it since at least 2002 and that it has had only one pot upgrade in that time so it can withstand neglect quite well! This photo shows C. 'Broughton Bride' in its original pot taken in 2006, it now has a slightly bigger home. I grow it in a pot as it is a koreana type of clematis which I do not think does well on my heavy clay soil and would suit lighter soils having a more fibrous root system than many other clematis species.

Clematis 'Broughton Bride' was selected by the late Vince Denny in 1990 from a hybrid of Clematis koreana, now generally grouped as part of the Atragene Group of Clematis containing the more familiar C. alpina and C. macropetala hybrids. It was named by Vince in 1998 after the village in which he and his wife Sylvia lived, introduced in the same year and registered by Vince and Sylvia in 2000. Vince bred and introduced a number of good clematis and this was one of the best.

Note: another good variety that Vince bred is C. 'Broughton Star', which is a Montana type and a very early Clematis of the Month on this website. 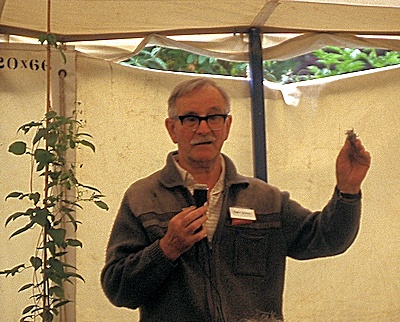