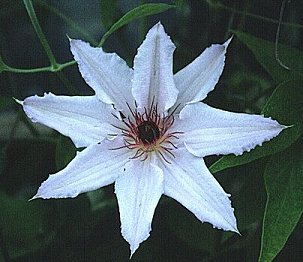 Clematis of the Month for November 1999

Some of our viewers who look out of their windows this month and see nothing but snow may wonder if our choice of a clematis for November is a misguided attempt at irony. Not at all: 'Snow Queen' was born in New Zealand, where it must even now be in bloom along with other well-conducted Spring hybrids. This one we owe to a long-prominent member of the International Clematis Society, Mr. Alister Keay, whose nursery in Christchurch is the home of several valuable introductions and reintroductions to the trade. 'Snow Queen' is not a planned hybrid, but a chance seedling that he named and launched in 1953. Thirty years later it came west into the hands of the Fisk Nursery and, owing to the wide span of that nursery's export trade, spread in the '70s and '80s around most of the clematis world. Increasingly nowadays it is a popular choice for illustration in articles and books.

With good reason. This is a plant with many talking-points. It is a capable grower but compact in habit, topping out ordinarily at 6' to 8' (2m - 2.5m), and hence adaptable to either open- or container-planting, or combination with a wide variety of host-plants. It is hardy, and — like many other Spring hybrids — if grown in a cold climate where it may lose its year-old wood to icy winds, can make up for the loss by mounting a good late bloom on its new wood. Dwellers in milder regions get the standard two crops, late Spring and late summer or autumn, and, since the winds do not handle the pruning in their gardens, they should give the plant any grooming it needs when the Spring bloom is past (Group II or B). A little shaping up is all it will probably require, though — as with any clematis — if the base starts to look unfurnished it is a good plan to take at least one stem far back.

What may be most interesting about the plant is the changeability of its flower. Not in shape, for that is customarily starlike and slightly cupped on first opening, whether there are eight sepals (as here) or seven or six. And they all have the ruffly margins. It is the coloration that keeps us guessing. Probably most of us have grown a white- or gray-flowered clematis with bluish undertones that suddenly but unmistakably went pink, and we realized that some new interaction of light and temperature must be at work. The well-known double 'Belle of Woking' can give dramatic instances of this. So can 'Snow Queen.' The flower is basically white, as one would assume from the name. But in the Spring especially, the white has a distinct bluish tinge, soon fading out as the blossom expands. Or is it pink? Sometimes it is pink, and most authors agree that in the repeat bloom there is a pink tinge or sometimes a pink bar. The writers are anything but unanimous in their report of the colors and their changes. All agree on the showy red anthers that are a major attraction, but for the principal color of the sepals they go all the way from purplish white and bluey-white (pink coming later) to white with a dash of pink (from the start). There is nothing wrong with these descriptions as far as they go; it would simply take a disproportionate amount of space to describe in detail the changes that such a plant as 'Snow Queen' can put on. In any case, brief spicings of pink and blue aside, the flower may be soberly described as mainly snow-white, ranging up to 6" (16 cm) in its first bloom, usually smaller in its late bloom, upward-facing, and strikingly handsome all the way through.

By the way, the seeming reversibility of pink and blue mentioned above is a well-known phenomenon in many clematis, and there are other color-changes that need study, such as the late-season arrival of lavender undertones in cultivars that we normally think of as white. Until all these are thoroughly investigated, it would be a mercy if authors on clematis stopped using the word "mauve" without qualification in their descriptions. Just to make the point: the new Encarta Dictionary of World English defines the word as follows: "a pale color between purple or blue and pink." (What was that again?)

Clematis 'Snow Queen' despite being available for a considerable number of years was only registered with The International Clematis Registrar in 1998. There must be nothing worse than introducing a new variety and then finding out that either the name you have chosen is already in use or that the name is not acceptable. Vicki Matthews plans to publish details of the varieties so far registered towards the end of 2000 so send details NOW of Clematis you wish to register.