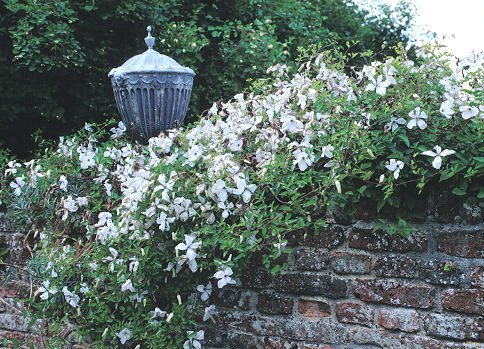 Clematis of the Month for October 2002

To the many gardeners who delight in "variegated" forms it may seem odd that a genus as rich as Clematis in variations of form, texture, and growth habit should offer very few examples of genuine variegation. Two that have had some notice are Clematis fasciculiflora and the form of C. japonica known as 'Gokanosho,' and others do exist, but none of them is widespread in cultivation or easy to acquire. When we speak of variegation what naturally comes first to mind is greenery—foliage marked or edged in a different color that adds distinctive character to variant forms of such familiar plants as hostas and ivies. But if we look for that kind of drama in clematis it is not in the leaves but in the flowers that we find it. And it is almost always temporary. Consider the accidental streaks of peach in the early flowers of 'Daniel Deronda' or 'King Edward VII,' or the splashes of green on the sepals of 'Duchess of Edinburgh,' which differ from one flower to another and may be altogether absent from a later bloom. And then there are the familiar green midribs of many a large-flowered Spring hybrid coming into bloom while the weather is still cold. Such variegation is a response to a given set of seasonal conditions, and hence too uncertain and fleeting to count on as an element in designing one's garden.

But if there is one clematis that has a fairly predictable mode of variegation it is C. 'Alba Luxurians.' In most respects a typical, free-flowering viticella cultivar, it has a highly individual first crop of midsummer blossoms that are mainly white but noticeably mottled or edged with green. The flowers are seldom symmetrical. Many of the greener sepals have a gnarled look, as if they haven't quite left off trying to be leaves, and in fact that is the simple truth. They are getting mixed signals from the weather, and are busy manufacturing chlorophyll. Later in the season, there will usually be less of the green and hence more white in the flowers, though that depends in good part on whether the plant is in sun or shade. (Shade fosters the green.) Blossoms can range from about 2.5" to 3.5" across (5-9cm), often with a pale green midrib showing underneath, and with a strongly contrasting tuft of anthers—dark reddish-purple, almost black—that is strikingly neat at first and later spreads out irregularly at the center. Late flowers may take on a faint undertone of lavender, remaining white from a distance. 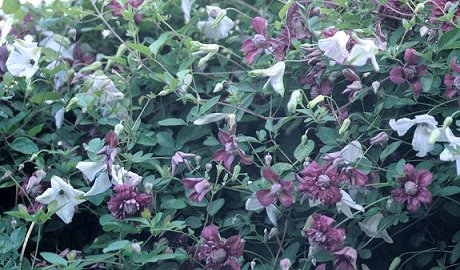 Like most viticellas, this is a vigorous grower, capable of 10'-13' (3-4m) in a season, or more if it is deliberately pruned to climb high. It is also good at spreading at the base—a genuine climbing shrub—and can attain such a mass that it might easily overpower a small host plant, so it is best given plenty of room. But apart from that it is quite tractable, and has all the adaptability to many garden uses that make the viticellas popular. It is shown here with another of the tribe, the equally well-established double known as —'Purpurea Plena Elegans.'

'Alba Luxurians' was bred by the firm of Robert Veitch and Son in or around 1900, and was accorded an AGM in 1993. Demand for it is constant, so it is unlikely to be departing from the trade any time soon.

A note on finding this cultivar in books and nursery lists: for many years it has been customary in the clematis literature to index the small-flowered kin of C. viticella under the letter V, though often the tags that accompanied the plants gave simply the cultivar name. With the arrival of the new Clematis Register and Checklist nearly all the viticella cultivars are set loose into the general alphabet, so that 'Alba Luxurians,' for example, appears on page 20 of the Register, with a mere cross-reference under viticella at the other end of the book. Authors hereafter will probably follow this lead for the entire genus, since it is based on the mandate of the International Code of Nomenclature (1995), but exactly how the trade will adapt to it remains to be seen. The traditional groupings (such as montanas and integrifolias, and so on, as well as the viticellas) are not "wrong"; they simply fail to allow at times for distinctions that are botanically important, so that it is well to see them as only approximations. But they are so convenient that they will surely go on serving as organizers. It follows that gardeners searching in lists for a particular cultivar like 'Alba Luxurians' may be wise to check for it at two spots in the alphabet—the name of the group if the plant ostensibly belongs to one, and the name of the cultivar alone. At least one major nursery catalogue has already gone the extra mile by listing such cultivars both ways.