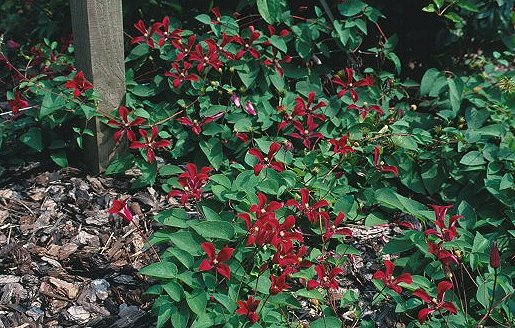 Clematis of the Month for November 2002

It would be hard to think of a clematis that has bedevilled more collectors and gardeners by sheer scarcity than the American species known as C. texensis. Recommended for decades in one gardening book after another, often with enticing pictures of its bright red bells, it has always been tantalizingly hard—not to say impossible—to find in the trade. Not that the "Scarlet Leather Flower" is technically an endangered species; plant-hunters in its native ground, the Hill Country of Texas, can still collect seed of it there in the wild, or even sneak off with plants of it by a modest arrangement with private landholders. But the rub is that the only reliable method of getting such plants to produce new ones is by way of the seed. Cuttings, grafts, and layers are a waste of time. So for many years, lucky owners of a going plant of the species have been accustomed to fielding yearly requests for seed. Ironically, even the seed can be a test of patience. Owing to the hardness of the seedcoat, germination may take anywhere from six months to two years. So it is no wonder that C. texensis continues high on the want lists of the stubborn and the faithful.

But those who must do without a specimen of it have long had a chance to own one or more of its well-favoured offspring. A century ago French and English breeders working on various combinations with plants of the Jackmanii and viticella strains produced a handful of notable hybrids that are still with us (though some others are regrettably thought to be lost). Among the survivors are such favourites as Jackman's 'Duchess of Albany' and 'Sir Trevor Lawrence', and our featured 'Gravetye Beauty.' 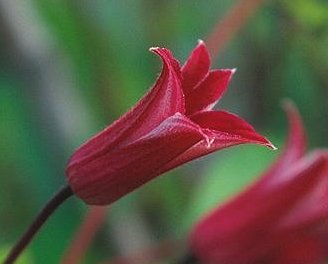 All three of these cultivars are strong vines, gradually developing a shrubby base, and producing what are usually described as tulip-like blossoms, all upward-facing, though these differ in colour and other details. The flowers of 'Gravetye Beauty' are of a singularly rich red, usually without the purple or lavender element that lurks to some degree in most clematis reds. The colour is variously seen as "ruby red" or "deep cherry red," or in one memorable breakthrough on the Internet, "smashing red." (The outer surface of the sepals is a grayish or creamy pink until hidden from view.) But what is most distinctive about the flower is the way it opens, spreading its tough-textured sepals until they are stretched to the limit, pointing in four—or five or six—different directions. Strangely, though the blossoms have little substance in that position, and are seldom as much as 3" (8 cm) across, they continue to make a vivid impression with that strong, deep red. Though a few large blossoms may appear on any remnants of last year's growth, the main bloom is on new wood and will normally begin in midsummer or slightly later. The foliage is relatively dark, affording good cover and lasting well. Reports of the height of the mature plant run from 8' to 13' (2.5-4m).

The only handicap of 'Gravetye Beauty' is a susceptibility to powdery mildew, which it doubtless inherits from C. texensis. Good ventilation and plenty of early-season watering are usually sufficient to keep this from becoming a problem. 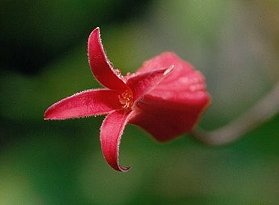 We have spoken before of the rich stock of breeding material that passed from Francisque Morel to William Robinson in 1914. 'Gravetye Beauty' was one of the hybrids that came along for the ride, but we do not know the exact formula of Morel's cross. The provenance is given in the new Clematis Register and Checklist as "'Gipsy Queen' or 'Comtesse de Bouchaud' or 'Ville de Lyon' x texensis." Not a bad heritage any way one looks at it. Each of the three would suffice to link up some version of the viticella heritage with that of the U.S. Leather Flower. As for the texensis component, it seems likely that the form Morel used was not the one most often described and pictured in our clematis books—a relatively stubby bell with creamy tips—but another, a longer, more graceful form with bright red at the tips. Until recently this more tulip-like variant, unofficially christened the "Tarpley" form, was not much noticed or pictured in the literature. But from the look of 'Gravetye Beauty,' and 'Sir Trevor Lawrence' as well, it seems the late 19th-century breeders had it in hand. We can be glad they did.