This is the first of my informal reports on our 20th Anniversary Meeting and Conference in Cambridge, Great Britain in July 2004. Click here for Part 2. Fuller reporting will be contained in Clematis International 2005.

The Society was founded by Raymond Evison in 1984. To celebrate this, our 20th anniversary, the Society held a one week Meeting and Conference based in Cambridge, Great Britain. It comprised visits to gardens, nurseries and other famous sites of historic and horticultural interest, plus two days of conference, with lectures and presentations by various eminent clematarians.

In this, the first of my reports, I will focus on some of the visits we made in Part 1 of the programme.

We stayed in Fitzwilliam College, one of the Colleges of Cambridge University. The origins of Fitzwilliam go back to 1869, though the existing buildings date from only 1966 and the latest additions - which included our lecture theatre - are not even one year old. With nearly 90 people to accommodate, we were spread out in the student accommodation across the campus, but all within easy reach of the lecture theatre, the dining hall and, most importantly, the bar.

Attendance for Cambridge 2004 was the greatest yet, with members from 12 countries attending. As a Society, we should be very pleased that such a meeting can attract members from as far away as Japan and the USA - all attendees benefit from the multi-cultural conversations and exchanges of ideas and thoughts about clematis. 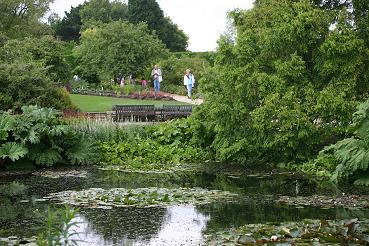 The programme of visits started on Sunday morning with Hyde Hall, the foremost Royal Horticultural Society garden in East Anglia. Although the weather was a little overcast, we were keen to explore the many walks around the different areas in the gardens. The large lake provided margins for a wide variety of planting, also attracting much wildlife into the garden. But the feature for which Hyde Hall is most famous for is its Dry Garden. 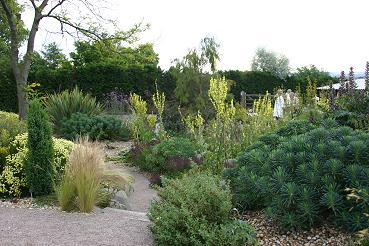 Although on the day we visited, the weather threatened rain more than once, East Anglia is the driest part of Great Britain. With increasing pressure on gardeners not to water their gardens more than is absolutely necessary, Hyde Hall decided to demonstrate just how wide a variety of plants can exist and thrive in an area which never receives additional watering.

The results are very impressive. Environmental issues have become very important over the last decade or two and we can all learn from this experiment. 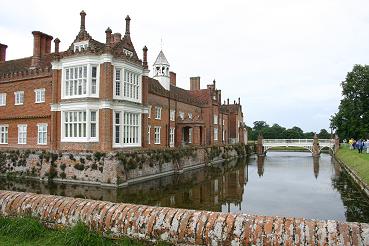 As a contrast to this relatively new and modern garden, our other visit on Sunday was to Helmingham Hall Gardens, Stowmarket, Suffolk. This magnificent moated house, built in 1510 and set in some 400 acres (165 hectares) of parkland, has been occupied by the same family throughout its life. The house is built on the site of an even earlier one and there is a 13th century church in the grounds. 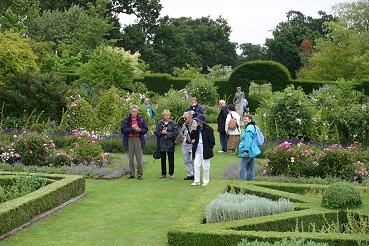 To one side of the house is a small Italianate garden. We quickly detoured through this, and were rewarded with a number of clematis. The formality of this style of gardening fitted very well with the grandeur of the house and moat. It was not difficult to image people strolling through this over the centuries. 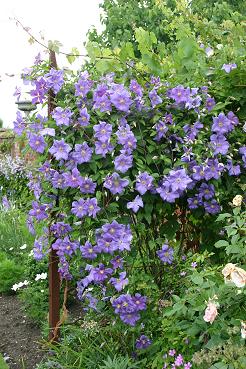 But surely this was not the only garden here at Helmingham Hall? It certainly wasn't! As we walked around the back of the house, so we became aware of an enormous walled garden. Entering through a narrow arched gateway, we were amazed at what was revealed. This was a walled garden with a difference. Every way you looked there were magnificent plants of every description. but, whereas a "normal" walled garden generally contains vegetables, this one was a riot of colour, with annuals, perennials, and even clematis. As you can see to your left, there was a wonderful example of C. 'Perle d'Azur', good enough to rival Sissenhurst? 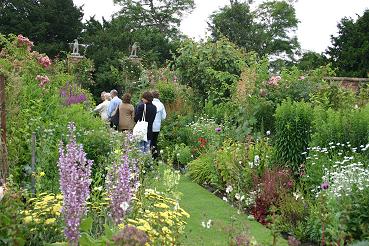 The walled garden also contained fruit and vegetables, but even these were decoratively arranged and planted. Everywhere you looked, there were borders brimming with flowers. And it was obviously a living garden. There were some areas that had been dug over ready for new planting, other areas where a crop had recently been harvested. It really had the feel of belonging to a person, not just there for show but to support the household. 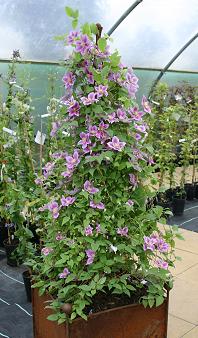 On Monday we broke into three groups, each to explore a different itinerary. I can only speak here about my group, which followed the South Option. We journeyed down towards Epping Forest, a little north of London, to start by visiting the Clematis Nursery of Sheila Chapman. Sheila had only recently (03:00 in the morning) returned from the Hampton Court Flower Show, where she had won a Silver Gilt medal for her display stand, but she managed to stay awake to show us around the Nursery. 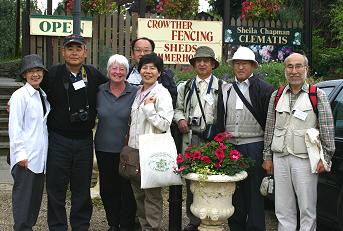 Sheila and her staff made us very welcome, providing coffee and biscuits and letting us wander through the tunnels. The impressive display of C. 'Piilu on the left was brought back from the Show, a small example of the standard of her plants. Unfortunately all too soon it was time to leave, but certainly not empty-handed. We thank Sheila and her staff for their hospitality and help. 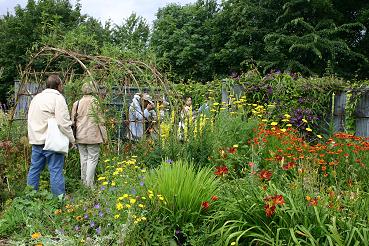 Next stop was Capel Manor College and Gardens where, after a short break for lunch we were joined by Tom Cole, Head of Department, who gave us a most comprehensive guided tour of the gardens. Coincidentally, Tom had recently been in Japan and whilst there, had met Kozo and Mikiko Sugimoto. 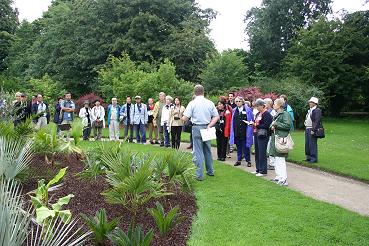 Capel Manor is the only specialist Horticultural College serving London. The 30 acres of grounds are home to many different gardens, formal Italian style, Japanese influenced, classic English. In one area there are a number of small gardens, designed and built by the students to demonstrate how new thinking can be applied to even a small space to create something different and effective. Tom made the point that these gardens are kept by the students through the growing season so that they, and visitors, can see how they "age", a most important aspect of any garden.

In spite of very threatening skies, the rain just about held off as we strolled around the grounds. With so many different areas to see, and so many different gardening styles, it would be very difficult not to find something to like here.

The day ended with a short stop at the Van Hage Garden Centre, for a final opportunity for "retail therapy". The interesting thing about "options" events, as we found the first time this was tried was on our visit to Portland, USA, is that invariably everyone comes back believing that they were on the most interesting itinerary.

On Tuesday morning we visited the University Botanic Gardens in Cambridge. The rest of the day was free time for people, to do what they wished. Roy and Angela Nunn tempted many to visit their Cambridge garden, a real clematis haven. Others did some sightseeing around the historic buildings of Cambridge city centre. But I leave you with a picture of possibly the classic activity in Cambridge, though not to be undertaken lightly unless, like Malcolm Oviatt-Ham, you are well-practised in the art of punting. 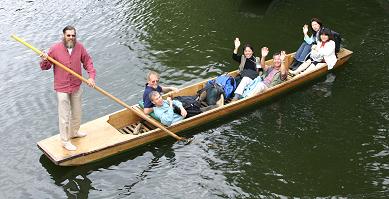