This is the second of my two informal reports on our 20th Anniversary Meeting and Conference in Cambridge, Great Britain in July 2004. Click here for Part 1. A more detailed account, including all lectures, presentations and workshops, will be included in Clematis International 2005. 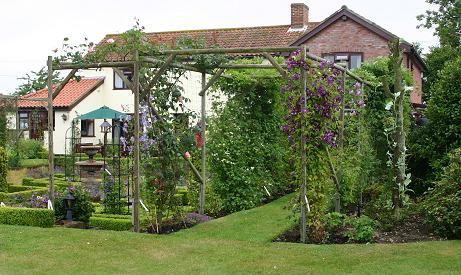 The final day of Part 1 saw two coaches driving east from Cambridge into the heart of East Anglia, to Thorncroft Clematis Nursery, owned by Jon and Ruth Gooch. Well known within the Society, they had not only invited us to visit the nursery but had also offered us an evening barbecue.

Jon and Ruth believe in a very natural approach to growing clematis and demonstrate this very effectively in their beautiful display garden. Here you can see clematis growing with all sorts of other plants, large and small, tall and short, in sunny or shady conditions. Fortunately the weather, somewhat cold and damp first thing that morning, was slowly starting to clear up and even gave us hope that there might be a little sun later, a possibility that was very pleasing since we would be returning to the nursery later in the day for the barbecue. 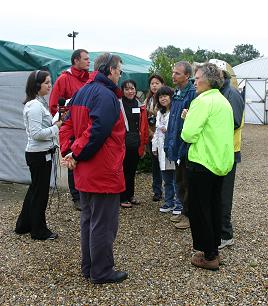 The Society received some unexpected but very pleasing publicity this morning due to the presence at the nursery of a live broadcast unit from Radio Norfolk. 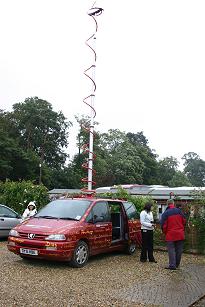 Every Wednesday they transmit a gardening program, often from a different outdoor location and this week, due to the visit by the International Clematis Society, they had chosen Thorncroft Clematis Nursery. As we walked from the coaches into the nursery, sat to the left of the entrance was a gaily painted vehicle with a 10m (30 ft) radio mast protruding from its roof. As the time for the start of the program approached, a small group of members, picked at random by the two hosts, gathered around it, ready to be interviewed. 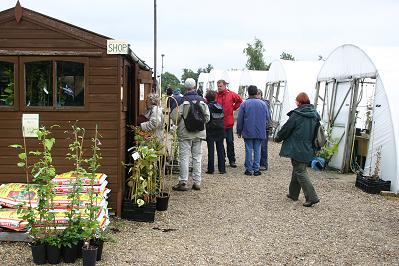 I don't know exactly how much "air time" we had, but it must have been at least 5 minutes, much longer than I had expected, or even hoped for. Everyone was given the opportunity to say a few words, about why they love clematis, about why some of them had travelled from around the world for this event, and of course the most important question of all, how should one pronounce "C L E M A T I S"!

But all too soon it was time to leave the nursery for our next stop, the Old Vicarage at East Ruston. It took a little while to get everyone back on the coaches, such was the frenzy to complete purchases. And as we set of for the afternoon visit, the clouds started to lift and the sun started to peek through. 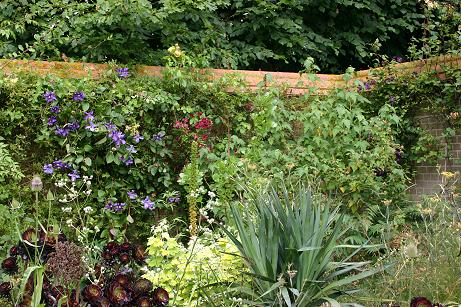 The Old Vicarage is a typical Arts and Crafts house built in 1913. When it was purchased by Alan Gray and Graham Robeson in 1973 the house was uninhabitable and the "garden" was a complete wilderness, containing nothing but coarse grass, over 1 metre high. Since purchasing the property, Alan and Graham have worked tirelessly on both the garden and the house, which finally became fully habitable in 1986. 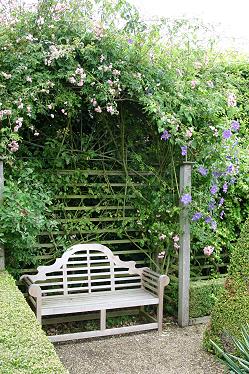 Although the original garden design, drawn up by the owners and based on a series of different rooms, has stood the test of time, there is a process of continual improvement and alteration. This means that not only do the gardens have a different feel throughout the year, they change over time such that visitors over consecutive years will still find much new planting to enthral and intrigue. 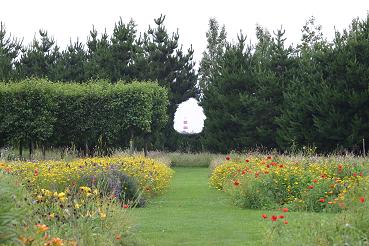 One quite unique feature of the garden design are the vistas. As one walks down the paths within the gardens themselves, often to left or right there are avenues made between plants that give tantalizing views of other areas. This is taken one step further by the use that has been made of the various landmarks that surround the property. Through windows in the outer hedges one will suddenly catch a glimpse of a distant church, tower or, as in this case, the lighthouse.

And we were very lucky with the weather. Although a couple of dark clouds passed overhead, they came to nought and in the main it was a sunny afternoon. Which was just as well as we had a barbecue to go back to. 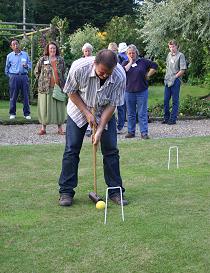 Cooking for 100 people is not the thing that everyone might offer to do, but that's exactly what as going on when we returned to Thorncroft Clematis Nursery late that afternoon. It was a wonderfully relaxing end to a great day, the food was excellent and it gave people the chance to sit back and chat with old and new friends, about clematis, the weather or anything else you care to mention. 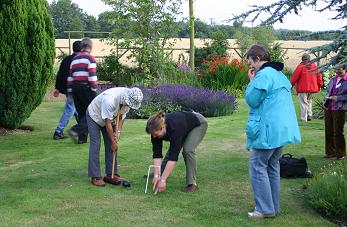 But the day was not over yet. Out on the lawn a croquet pitch had been set up and we rounded off the day with a rousing game or two. I'm sure the games were infinitely improved by the fact that most people present had never played before, nor did they know the rules. But that didn't matter at all as, as you can see to your right, even coaching was at hand. In fact I'm not sure that anyone really knew the rules properly, but we all had a great time.

So thank you to Jon and Ruth and all their team for a wonderful day. 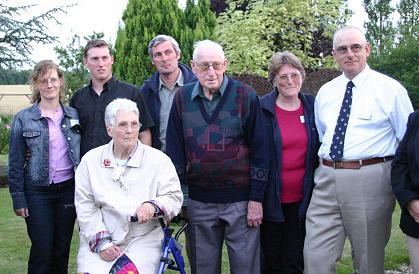 The next couple of days saw us in the lecture theatre at Fitzwilliam College for presentations and workshops, and full details of these will be published in Clematis International 2005. So for this report I will move on swiftly to our final day, and in fact our final event, the barbecue at the home of Pat Thornhill, Barnwell Junction, Cambridge. 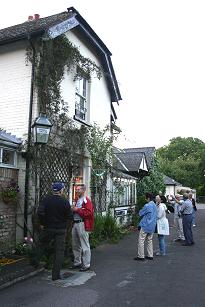 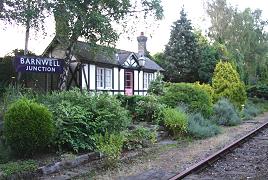 Barnwell Junction is a late Victorian railway station. When the trains stopped running, the station was put up for sale and bought by Pat Thornhill. Over the years she has turned the platform into her garden and the booking office into a bathroom. But many of the original railway station features have been retained within the house, as many of us saw when Pat gave conducted tours. Truly a unique property. 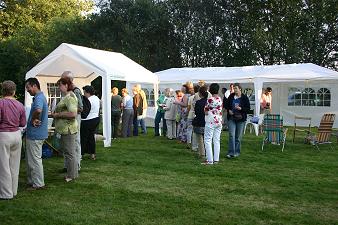 The barbecue was set up in the field opposite the station and was burning nicely when we arrived. A beautiful evening, it was the perfect finish to a very successful event. Thoughts of the return home were put to the back of one's mind as we sat around, eating, drinking and talking. It was even an opportunity for Stefan Tschirky to practise his Japanese! 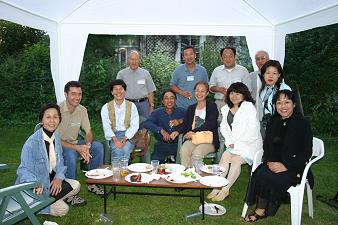 I leave this two part report with a group photo, taken at Thorncroft Clematis Nursery.

Over 100 attendees from 12 countries - this was a meeting to remember!

Copies of the Group Photo

I have had a number of requests for copies of the above Group Photo. To make it available, I have loaded 4 versions of it on this site to allow you to select one. Obviously the highest resolution is the best quality, but it is also the largest file and so will take the longest time to download. So the choice is yours.

For those of you using Microsoft Internet Explorer, use your mouse to position the cursor over the filename of the version that you require from the choice of the four below, then click the RIGHT HAND BUTTON and choose the "Save Target As..." option.

Alternately, you can click the LEFT HAND BUTTON, which will cause the picture to be loaded into your Browser, after which you can use the RIGHT HAND BUTTON to "Save Picture As...".

I suspect that for those of you using a different browser, there will be a very similar mechanism.